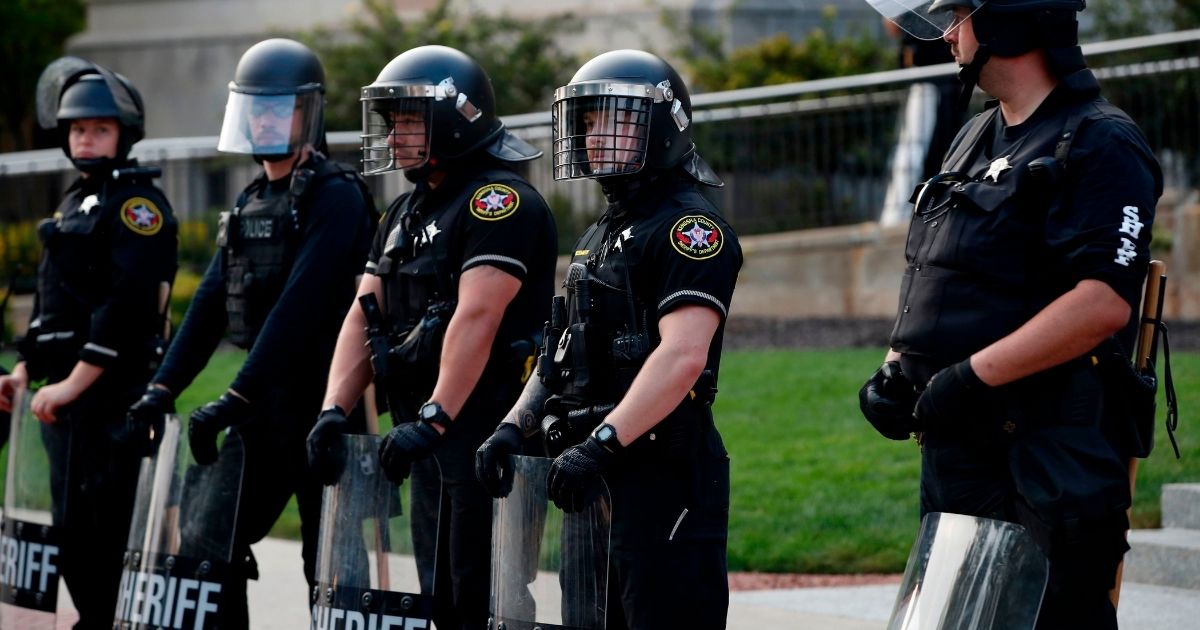 Broadcast news outlets often show horrific footage of a lone victim being bludgeoned because of some actual or perceived political difference, and for extra effect, give the story more attention when the pummelers and the pummeled are of different races.

An underreported component of those stories, though, is that the number of bystanders dwarfs that of the attackers, yet hardly anyone ever lifts a finger to get involved. A prime example is a video of one man viciously beating another to near unconsciousness on a subway train while about 35 onlookers sit idly by.

But do you know who does get involved and breaks up such fights, saving not only broken bones but also lives? The police do.

Much like how soldiers defend our country, police officers defend our streets. After blaming the former through most of the 1960s and 1970s for their direct involvement in the much-maligned Vietnam War, Americans of all political stripes — doves and hawks alike — sounded the clarion to “support our troops!”

Regrettably, such gratitude is rarely afforded to our men and women in blue who risk their lives every second they wear the uniform — not only when they answer a call, but even when they stop for a cup of coffee.

In fact, subsets of the modern American left continuously try to one-up the other by intensifying the absurdity of their proposals. Apparently, “defund the police!” wasn’t enough; now the prompt in some circles is to abolish law enforcement altogether.

Paradoxically, all of that takes place as headlines abound with tragic stories about random mass shootings in schools, movie theaters, supermarkets, you name it.

The obvious solution is not only to retain existing officers but to hire a lot of new ones.

But wholesale dumping of blue uniforms to address rioting crowds isn’t much of an answer; the solution ought to be proactive, not reactive. We need to take back our cities one block at a time, and the way to do it is with community policing.

Do you think we need more police officers, not fewer?

Parents are in charge of their households; they don’t ask random adults on the street to come over and make sure the kids finish eating their vegetables. Teachers control their classrooms; they too do not run outdoors to find someone who can teach fractions and decimals.

Why, then, do some strangers show up when there’s a mugging or a shooting, dressed and armed like they’re about to storm the palace and effectuate a coup?

Police officers need to thrive in the neighborhoods they serve. To see and be seen at schools, in parks, on the streets, and in the corner stores. They should be on a first-name basis with the neighbors, and especially with the children, who must grow up understanding and appreciating that just as most human beings as a whole are good people, so are most cops.

And we need a lot of community police officers. Does anyone complain that there are simply too many nurses, teachers, firefighters or ice cream truck drivers?

Crimefighters deserve that same regard. Rather than feeling oppressed at the sight of a neighborhood cop, residents should learn to feel safe, even cozy.

RELATED: Erick Erickson: Compare the Wright Shooting to the Babbitt Shooting and a Very Nasty Truth Comes Out

Will there be some bad cops in the mix? Sadly, of course. But there will be no room for them in a tightly knit community of civilians and police.

Growing up in New York City, I remember “Officer Joe” (played by Joe Bolton) smiling and in uniform hosting children’s cartoon shows on television. I also befriended an actual policeman named Jim who watched us kids climb rocks and play tag in the park at lunchtime.

Unfortunately, within a decade, that neighborhood had devolved into one big crack den. Not so coincidentally, Officer Joe was long gone from TV and Officer Jim had long been reassigned out of the park.