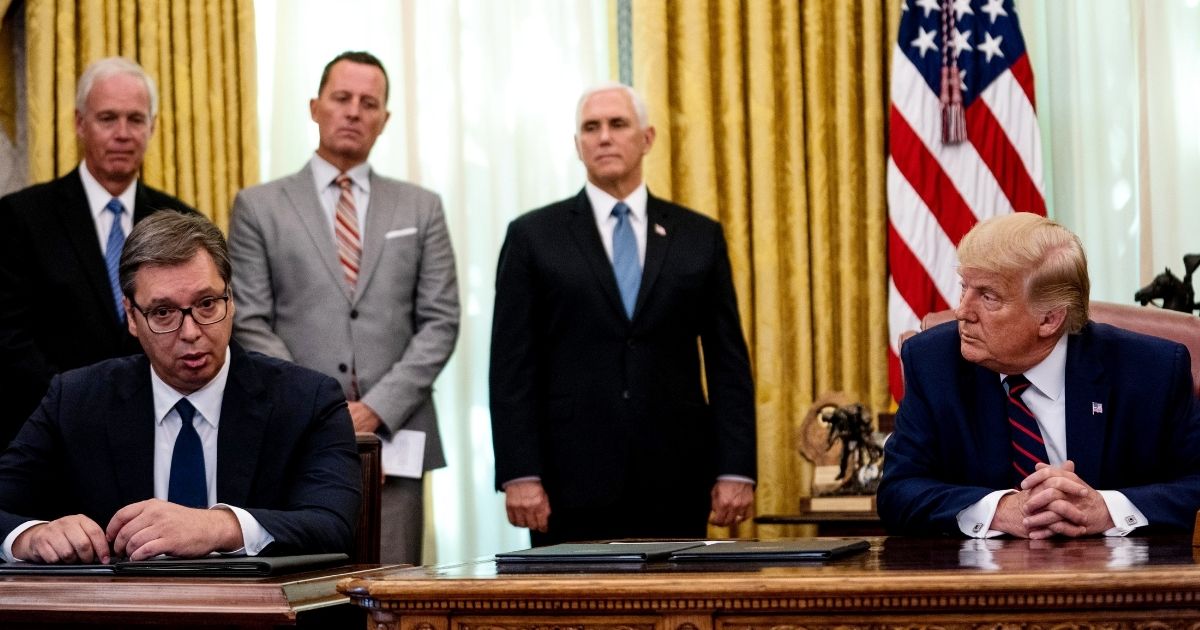 “America first does not mean America alone.” President Trump has repeatedly clarified this stance throughout his presidency and his actions have proven the truth of his words.

President Trump’s envoy to Kosovo and one of the architects of this deal, Richard Grenell, along with National Security Adviser Robert C. O’Brien and Jared Kushner, all among the most effective of the Trump team, did a wonderful job and surely deserve credit for this achievement.

The two countries have a long, painful, violent history that divides them, seemingly, beyond repair. Kosovo achieved liberation from Serbian persecution in 1999 with the help of the United States and became fully independent in 2008 after President George W. Bush visited Albania the previous year.

America’s role in righting the wrongs that have been done to the Albanians throughout the centuries has been fundamental and unique. It was no different this first weekend of September.

Serbia does not recognize Kosovo as an independent and sovereign country. It has lobbied against recognition from other countries as well.

On the other side, Kosovo cannot easily forget or forgive the thousands who died or were persecuted by the bloody regime of the dictator Slobodan Milosevic. Therefore, both countries had reached a stalemate for quite some time.

The West, especially during the Obama years, allowed the so-called stabilitocracy – meaning the creation of authoritarian or semi-authoritarian regimes in the Western Balkans that would keep the status quo and prevent these countries from escalating conflicts with each other, at the expense of democracy.

On the other side, Russian influence in countries such as Serbia is great, and Albania and Kosovo have relied on the United States being a fair and honest mediator and influence in the region.

Do you think Trump’s foreign policy accomplishments have been a major achievement of his presidency?

Albanians are perhaps the most pro-American population in the world. However, Barack Obama abandoned them. While conflicts and resentment were allowed to fester, democracy faltered, and leaders engaged with one another with deals that benefited only them. Meanwhile, the power vacuum was filled by Russia and China.

President Trump’s predecessors and Brussels had tried for decades to accomplish the normalization of relations between Kosovo and Serbia by focusing on what divides them. Tackle old wounds, symbols and political issues first, they argued, and economic relations would ensue.

President Trump did the opposite. He is trying to bring together the two countries economically, hoping that tensions will subside, and it will be easier afterward to deal with the political side.

As Grenell explained, “the U.S. position on the Serbia-Kosovo conflict has been that steps toward economic normalization will dilute the power and importance of the dispute’s hot-button political matters.”

According to the agreement, both parties have agreed to build railroads and highways between them, open and make operational their shared border, recognize each other’s diplomas and professional certificates and join the Mini Schengen economic zone together with Albania and North Macedonia.

RELATED: Tim Graham: Biden’s Been Ditching His Press Pool at 9 or 10 AM and Nobody’s Saying a Word

There will be foreign investments in the two countries, although the exact sum has not been disclosed.

According to journalists from Kosovo, it is estimated to be around $13 billion. Grenell said the two countries will work with the U.S. International Development Finance Corporation and the Export-Import Bank to support projects and to finance small and medium-sized enterprises.

These investments will be a great substitute for the $8 billion dollars coming from the Chinese. Thus, President Trump also dealt a huge blow to Russian and Chinese interests in the region, including a pledge from Kosovo and Serbia to reject Huawei involvement in 5G.

Moreover, there will be a one-year moratorium on recognition and derecognition campaigns by both countries, focusing instead on economic cooperation.

After one year, the two parties and the U.S. will analyze the progress made and whether this approach has been successful. In the worst case, there will be a return to the previous status quo. Since Kosovo managed to get a big recognition from Israel and was not likely to achieve any other recognitions this year, this moratorium works in its favor by freezing Serbia’s attempts at derecognition.

Israel, through the lobbying of President Trump no doubt, agreed to recognize Kosovo as a sovereign state. The hope is that more countries with secessionist issues such as Spain will follow in recognizing Kosovo.

In Grenell’s words, both Balkan states “agreed to designate Hezbollah in its entirety as a terrorist organization and fully implement measures to restrict Hezbollah’s operations and financial activities in their jurisdictions.” So it was huge progress not only for the Balkans, but for the Middle East as well.

Lastly, and most importantly, any plans regarding border changes between Kosovo and Serbia, which had been considered to be opening Pandora’s box, with major potential for upheaval in the Balkans and in Europe, were discarded. In an interview with Laura Ingraham, Grenell admitted that it had been John Bolton’s plan and the administration had not given its approval.

It is important, for the sake of stability in the region and the credibility of the U.S., that the territorial integrity of Kosovo has remained intact. Moreover, through this deal, Kosovo has been recognized by Serbia de facto if not de jure through its recognition of diplomas and licenses.

The small Albanian country is in a much better position than it was a month ago, as a pathway for a potential recognition from Serbia has been opened.

Undoubtedly, this is just the first step in a long process. Through it, however, President Trump has managed to further contribute to making the world safer and he and his team deserve to be recognized and applauded for this.

Come Nov. 3, voters ought to take into consideration the foreign policy achievements of President Trump when evaluating his worthiness for a second term.