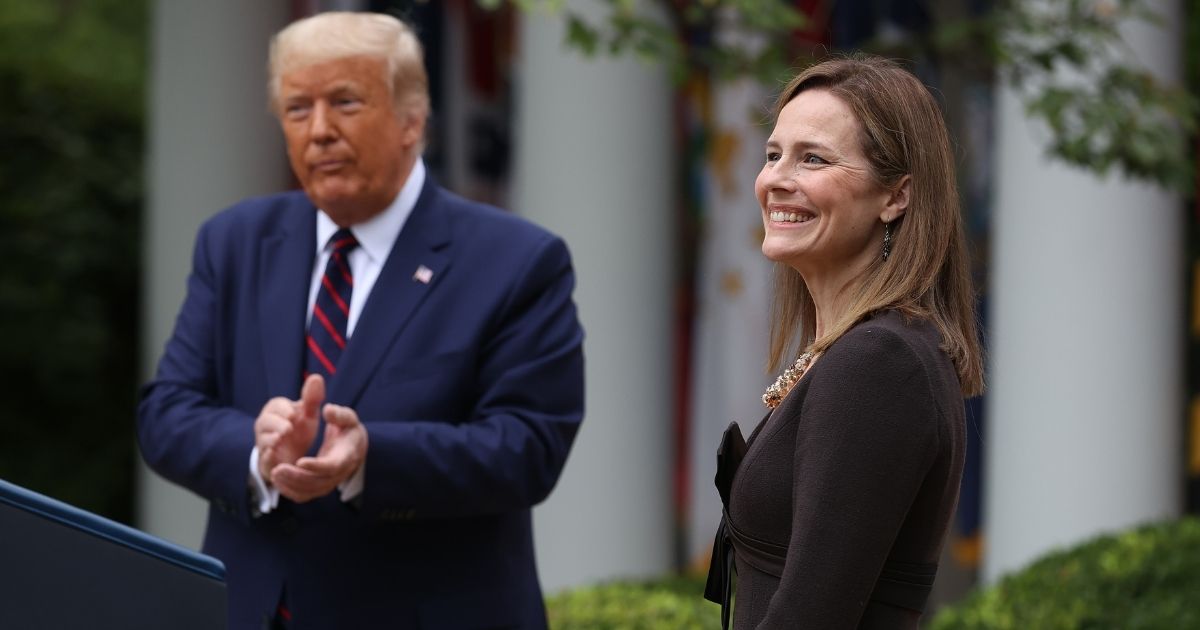 The radical left is once again — what else is new — apoplectic.

It truly has been delicious watching meltdown after meltdown occur since that glorious evening in early November almost four years ago when the man they love to hate soundly defeated the woman they hate to love in the most dramatic presidential election in living memory.

Since then they have been foiled at every turn it seems by the new Teflon Don, the happy warrior who takes their slings and arrows for us and then hurls them back at the raging Dems via a hilarious tweet or a perfectly timed one-liner at one of his own “peaceful protests” in the airport hangars.

This time their fit of apoplexy was brought on by the passing of Supreme Court Justice Ruth Bader Ginsburg, and Trump’s subsequent willingness to nominate a third justice and see her confirmed to the highest court in the land. Guy’s got a lotta nerve apparently, fulfilling his duties and all — even during, you know, COVID.

Here are a couple of the measured and thoughtful reactions to this thoroughly normal occurrence in our constitutional order that were on offer on the internet in recent days:

Noted religious commentator Reza Aslan seemingly called for civil war in a tweet replying to one by Mitch McConnell, who wrote that the Senate would vote on a nominee for RBG’s seat if the president sent one over.

The guru’s response? “Over our dead bodies, literally.” Normally that phrase is used figuratively, so we suppose the qualifier “literally” was necessary to indicate his seriousness.

Over our dead bodies. Literally. https://t.co/rQbvuKakHU

Earlier Aslan had offered this proof of his devotion to legalized infanticide and other liberal sacraments: “If they even TRY to replace RBG we burn the entire f—ing thing down.”

Normal citizens may be forgiven if they wonder whether this time that “entire f—ing thing” might include their own neighborhoods.

The problem with the radical crazies who call the shots in the donkey party these days, their key “influencers” as it were, is that they think normal Americans think like them. Newsflash: They don’t.

Even most of the longtime Democratic members of that most crucial swing bloc in every election, Roman Catholics, don’t. They just don’t.

In our book, “A Catholic Vote for Trump,” we wrote from the perspective of two men who long ago migrated from the Democratic Party which our families had all been members of, in McCullough’s case for generations.

RELATED: Dick Morris: Trump Did Not Avoid Taxes, He Prepaid Them

They are good and decent people, hardworking, family-oriented, but they have been very slow to wake up to the lunacy of the left. As long as it was even remotely plausible that their party seemed to them to be that of the working man or the underdog, while the Republicans seemed to be that of the rich guys, they were, sadly, willing to overlook the Dems’ promotion of abortion and other issues at odds with their professed faith.

Truth be told, the timidity, cowardice and outright heterodoxy in some cases of the American episcopate contributed to their ability to rationalize that disconnect, and consequently, many such Catholics do not take abortion as seriously as they should.

But they are good people who are not rabidly on board with the woke mob on anything, and happily, President Trump is not afflicted with the aforementioned failings of the American bishops.

He did what he said he would do; he did his job; he stood tall in the face of opposition and nominated Amy Coney Barrett, by all accounts a good, kind and decent woman who also happens to be an exceedingly well-qualified jurist to boot.

In nominating her, Trump will have backed that mob into a corner and given them yet another opportunity to alienate normal people of every political persuasion.

With specific reference to Catholics, the Star Wars cantina scene casting call “feel” of many gatherings of leftists these days is only serving to drive more and more of the “regular Joes” of the Church into the waiting arms of MAGA — not the Republican Party necessarily, for now, but the MAGA movement led by Donald Trump.

Normal people recoiled at what was done to Brett Kavanaugh during his confirmation “hearings,” if they could be called that.

Do you think more Catholics will leave the Democratic Party thanks to President Trump?

The Democrats launched a cynical and calculated attempted political assassination that backfired, for they failed to keep him from the court but succeeded in further exposing themselves as vicious political hacks who will do anything, and we mean anything, to maintain power and keep the slaughter of the innocents legal in these United States.

Kavanaugh’s emotional opening statement with his family in the background is a moment that will not soon be forgotten. Let the Dems try to do the same to Barrett.

Every decent man in this country — and the Catholic Democrats we grew up with are all decent men and their wives are good and decent women — will instinctively be repulsed, enraged, and converted.

They may not talk about it or make a scene, but that fundamental decency will win out when the curtain closes behind them on voting day and they vote for a Republican for president for the first time in their lives.

Having just watched the ceremony at which her nomination was announced, and having heard her speak and, yes, having seen her family, we suspect that decent Dems everywhere are putting the word out not to attack her too viciously.

They know that doing so will backfire terribly for them. Unfortunately for the more decent or merely strategic-minded Dems, they won’t be able to control their more rabid associates. Loons like that will revert to form; count on it. Watch MSNBC in the coming days and weeks for proof of that prediction.

When the Democrats definitively lose the Catholic vote, forever this time given how their party is presently constituted, the Democratic Party will, for all intents and purposes, cease to exist.

“Democrata delenda est” will be the cry, and salt should be sown over the ground of that locus of criminality and corruption, the DNC headquarters.

Finally, in yet another demonstration of the notion that God does, in fact, have a sense of humor, it will be a sort of poetic justice that Trump’s nomination of an accomplished professional woman to the highest court in the land will have been the precipitating event that causes the Dems to self-destruct.

And what is more, it’s ironic that Trump, in exposing the Democrats for what they are and abortion for what it is, will be the catalyst for many Catholic Democrats to reconsider how important an issue abortion, as well as the orthodox practice of their faith, is to them going forward.