Home Daily News Op-Ed: Believe It or Not, God Just Blessed America Right Out of... 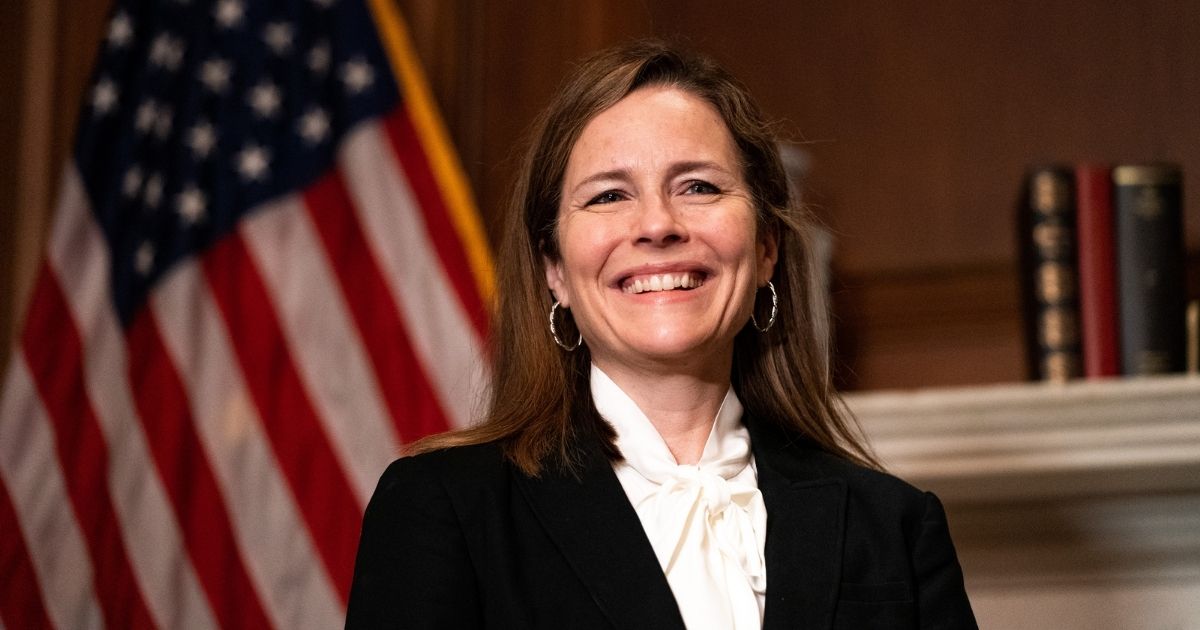 Right now, it looks like God really does bless America — sometimes right out of the blue and in a most ingenious way.

For this “one nation under God,” something remarkable has popped up.

The Creator, still recognized solemnly and faithfully in the Constitution, seems to have fashioned an astonishing pro-life rescue plan that is not without some humor, impeccable timing and the winning tactical element of surprise.

No one saw this coming!

Last Saturday, we all watched seven young Americans with their mom and dad step out into the Rose Garden at the White House. We all saw the president of the United States of America nominate their mom to the Supreme Court, the highest court in the land.

In that moment, the false narrative of fifty years of radical feminist pro-abortion ideology was shattered. Gone at last was that founding dogma of an errant ideology — that pregnancies are nature’s “unjust”  constrictions on our equality with men.

A Providential Stroke of Genius?

It sure looks like a stroke of divinely exquisite irony and sheer genius — this sudden elevation of Amy Coney Barrett, this mother of seven, to Supreme Court candidacy.

Widely recognized to be at the top of her legal profession, this real-life mom — and her presence with her husband and family in the Rose Garden — is living proof that her Supreme Court predecessor was wrong about one thing.

The late Justice Ruth Baden Ginsburg was wrong in her advocacy of abortion “choice” for women as “necessary” for successful competition with men.

Justice Ginsburg was just plain wrong to teach that even up to birth “the unwanted” can be aborted because they are terrible burdens, unfair obstacles impeding women’s progress.

No Repudiation of Pregnant “Mothers” in Judge Amy’s Lexicon

Justice Ginsburg’s radical judicial activism was epitomized in her dissent in the Gonzales v. Carhart case in 2007. She asserted that any restriction on partial-birth abortion was an “alarming” interference with a woman’s “control over her destiny” and with her right to “participate equally in the economic and social life of the Nation.”

In advancing this dubious pro-abortion dogma, Justice Ginsburg finally reached the silliest ideological statement of her mostly impressive Supreme Court legacy. In Box v. Planned Parenthood in 2019, Justice Ginsburg objected to Justice Clarence Thomas’ use of the term “mother” in regard to a pregnancy. With superbly fatuous illogicality, she opined:

RELATED: Op-Ed: Who Is Behind All of This?

“[A] woman who exercises her constitutionally protected right to terminate a pregnancy is not a ‘mother.’”

Happily, in Judge Amy’s understanding of constitutional law, there has been none of this negativity toward mothering a child from conception to birth — no repudiation of pregnant “mothers” and of our constitutional duties to secure the same blessings of liberty for “our Posterity” as for “ourselves.”

Fortunately too, in the upcoming confirmation process, no amount of hostile interrogation of Judge Amy will find any trace of racism or discrimination against immigrants or people with special needs.

Not just her academic output and current judicial record but the heart-warming evidence present within the composition of her own family attests to her good nature and generous capacity for inclusion. (She and her husband adopted two black children from Haiti and of the other five of their children, the youngest has Down syndrome.)

Regrettably, an asinine new woke theory smearing interracial adoptions as racist makeovers has already been trotted out to besmirch the love and generosity that formed this family.

But the integrity of Judge Amy’s respect for every child will not be pierced by such attacks.

Since Roe in 1973, Supreme Court progressives have doubled down on the misjudgment that to abort “the unwanted child” is a woman’s “right.” Such intransigence denies the reality that her child is a human being “created equal” to love and to be loved.

Righteous law has no business in legalizing the brutal termination of these smallest human lives present and thriving (through no fault of their own) in the benign natural and normal human process of pregnancy.

How Much Longer Are Abortion Politics To Remain Trapped in a 1970s Time Warp?

The Biden/Harris pro-abortion policies stubbornly continue to misrepresent restrictions on abortion as a “war on women” — another nonsense phrase lifted straight from the 1970’s pro-abortion ideologues’ handbook.

It’s sad that the “war on women” is actually a cover-up of the real war — a war on unborn children whose only “crime” is to be “unwanted.”

Democrats stubbornly reject the truth that the child at risk of abortion is a human being, a member of “our Posterity” with the same right to life as “ourselves.”

We all know in our hearts that no genuine rule of law can tolerate lethal harm deliberately inflicted on a mother or her unborn daughter or son, who both have an unalienable right to life.

No, says the Democrats’ legal team, “it” is “only a fetus” with no rights except what is allowed by the pregnant woman. Her allegedly superior right to control her own body confers ownership and killing rights over this other new little body so vibrantly alive in her care.

This “superior right” for pregnant women promoted on the false grounds that their pregnancies are childless is ideological propaganda.

Both reason and science confirm that the unborn child is already in existence, being protected and nurtured in her or his mother’s womb.

In beautiful detail, fetal science and technology can now locate and record her child’s lively existence in utero.

Her child is not a generic, anonymous “fetus.” We can identify the child’s father and whether the child is a son or a daughter. We can ascertain long before birth that her child is a unique member of the human family, biologically, genetically and genealogically.

Judge Amy understands this, as Justice Ginsburg did not.

Time To Restore the Constitution’s Principle of Unalienable Rights

Sadly, Justice Ginsburg did not respect the founding principle of unalienable rights set out in the American Declaration of Independence.

As the Founders understood, the right to life is bestowed by the Creator on each human being. It is protected under God and under the Declaration and the Constitution, and this protection extends to both ourselves and our “posterity,” our descendants, the unborn children of all succeeding generations.

Created in their mothers’ wombs, the unborn are “endowed by their Creator with certain unalienable Rights, that among these are Life, Liberty and the pursuit of Happiness.”

The legal principle of inalienability recognizes that no one may destroy their right to life, or deprive them of that right, or transfer that right or renounce it — that’s what unalienable means.

No one may remove the human rights of the unborn child from the protection mandated by the rule of law established by the Constitution.

The term “no one” means no president, no state, no legislature, no judiciary and not even the U.S. Supreme Court — none of these has the authority to de-recognize the human rights of any individual human being or any selected group of human beings or to remove legal protection from them.

Do you think the nomination of Amy Coney Barrett is a blessing for America?

Human beings cannot be deprived of the substance of their rights, not in any circumstances, not even at their mothers’ request.

With the appointment of a new justice who holds a deeper understanding of these truths, the Supreme Court may be ready to rethink the injustice of aborting small innocent human beings prejudged to have “lives of negative value.”

But as the Founders of the great United States of America understood from the start: “[A]ll things are possible with God.” (Mark 10:27)