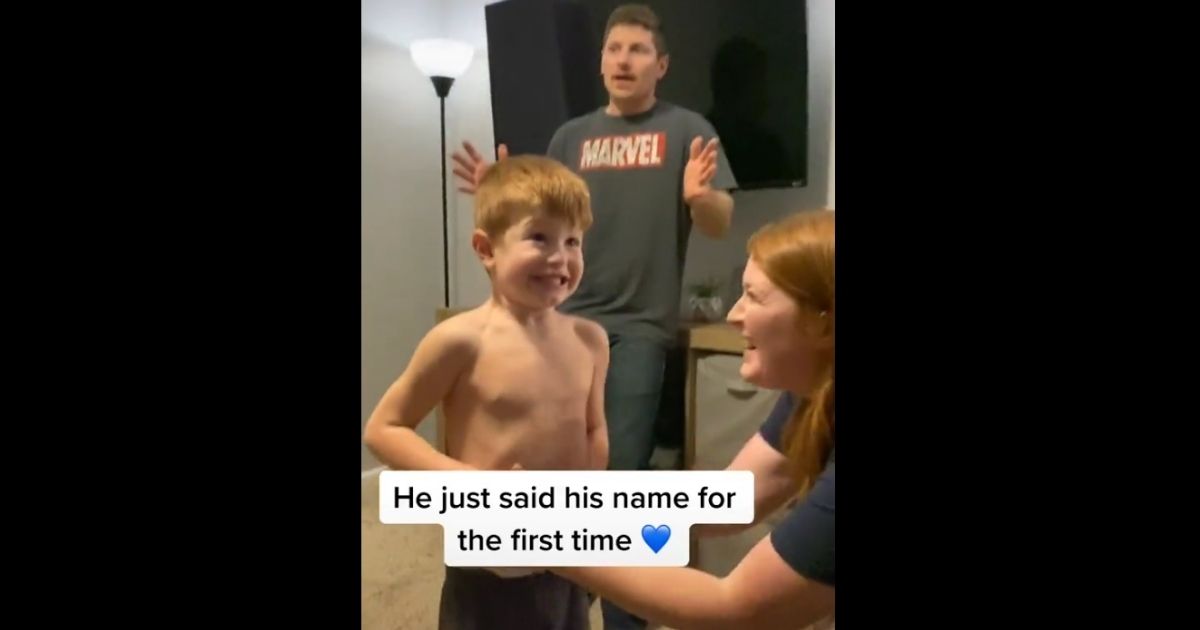 A child’s first words are a big deal. Parents often vie for the position of honor, saying “mama” or “dada” over and over in an attempt to have their label first on the list.

Not all children speak at the same developmental stage: Some absorb for a longer time before producing while others hit the ground running with an impressive vocabulary. For some children, speech is never a guarantee.

For Micah, an adorable 5-year-old boy with autism from Ohio, verbal language was years in the making.

“Micah has always been a really sweet, tender-hearted, quiet kid,” his mother, Haley McGuire, told Newsweek. “Obviously, he doesn’t talk, but he kind of keeps to himself.

“He’s always been extremely loving. I know that that’s not necessarily normal for kids with autism. They like to not be touched and they like to be alone. But he’s very affectionate and loving. It’s been easy for us to be so happy and encouraging with him.”

She explained that while he would occasionally say a word or two, he wasn’t consistently speaking.

“Every now and then, he’d blurt out a word,” she said. “But when I say ‘wasn’t talking,’ he would go weeks without saying anything.”

But recently, that all changed, and with the online world as his stage, Micah has started to speak.

In a video that went viral on TikTok this week, a woman (who Haley says on the comments in a Facebook post is her sister) coaches the little boy, breaking his name down into two syllables. He watches her say the word and then repeats it for the very first time, to the applause and uproar of his family:

He grins the biggest grin as everyone celebrates, and does a flip with the help of another family member.

“It’s been a day and a half now, and everything we ask him to say, he’s copying,” McGuire continued. “He’s not going out of his way to say anything on his own, but he’s literally copying everything we say, which is crazy because he wasn’t talking at all.”

“I’m just really emotional. I’m really proud of him,” she said. “I don’t think I have an accurate word to describe how I’m feeling other than really — maybe I’m speechless.”

Another TikTok video shows him repeating a variety of family members’ names, as well — he’s on a roll, and the videos have been viewed millions of times. The family’s joy is contagious, especially for others who have experienced or are currently experiencing a similar scenario.

“[I]t brought me to tears because i can totally relate my son also started talking not too long ago and this is exactly our reaction and he loved it…so he never stopped talking….speaks in sentences now,” one woman commented. “[T]hankyou for reminding me what his first words meant to me.”

“It came across my feed today,” another mom wrote.

“I don’t know you or your beautiful boy but thank you so much for hope. My boy will be 5 in December with no words yet. I am so hopeful and I am beyond happy for you and your son. The face of the man in the video where he says his name (your husband?) … I felt it ♥️ thank you and God bless your Micah!!”

The family seems happy that people are finding hope and inspiration in their son’s achievement, and McGuire commented, “please never stop believing! God is our healer!”