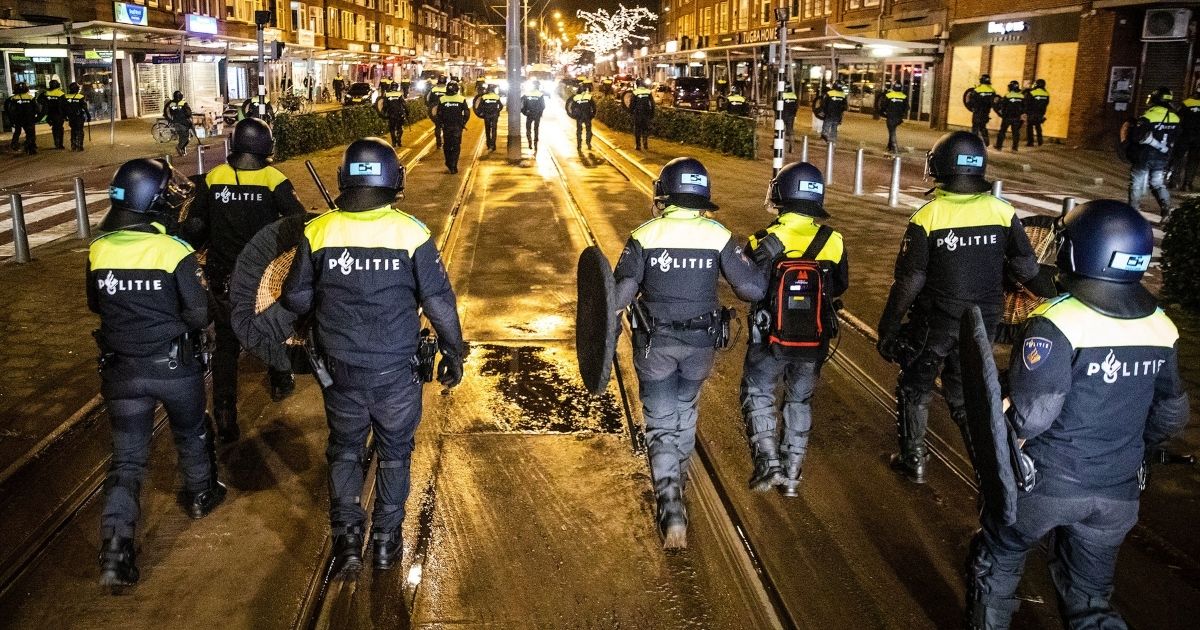 The mayor of one of the largest cities in the Netherlands is predicting that a showdown between citizens forced into lockdowns and those behind the institution of those lockdowns could spark a “civil war.”

Many Dutch citizens are apparently not taking too well to being forced into halting their lives almost a year into the coronavirus pandemic. Protests against lockdowns, curfews and other mandates have descended into full-scale riots between citizens and police officers in recent days, according to numerous reports.

What a sad day in Dutch history #riots #rellen pic.twitter.com/Erdw1Hbtwu

The Sun reported cars are being burned, stores looted and police officers attacked across the country. Fires are raging now nightly as the populace is rising up against the government, and neither side has backed down.

TRENDING: Less Than 1 Week of Biden and Multiple States Are Already Rebelling

John Jorritsma, the mayor of Eindhoven, which is the country’s fifth-largest city, predicted a potentially dark outcome on Tuesday.

After using not-so-cooled language, such as branding the anti-lockdown activists as “the scum of the earth,” Jorritsma told reporters at a media briefing that the country could face a civil war.

“I am afraid that if we continue down this path, we’re on our way to civil war,” Jorritsma said. The mayor added during the briefing, “My city is crying, and so am I.”

The situation is tense, with chaos enveloping cities across the Netherlands nightly this week, just after sunset. Hundreds have been arrested, although no deaths have been reported thus far.

Do you think people are finally growing tired of the lockdowns?

The New York Post reported 10 police officers have been injured as the riots have taken over 20 cities this week. The country has instituted a curfew for the first time since World War II, which actually preceded the violence.

That curfew allows only essential workers to leave their homes between the hours of 9 p.m. and 4:30 a.m. The curfew came as citizens were already burdened by the closures of businesses that were deemed nonessential.

Dutch Prime Minister Mark Rutte condemned the violence this week in a statement.

“This has nothing to do with protesting or fighting for freedom. It is criminal violence and we will treat it as such,” Rutte said.

The revolt against Dutch COVID restrictions appears to be the largest, most coordinated and most anger-fueled organized resistance to lockdowns seen in the Western world thus far. Of course, it’s difficult to condone those who are burning cars and injuring cops, but at a certain point, people will reach their breaking point. The Dutch have reached theirs. It’s apparently 1776 in Eindhoven.

With shops boarded up and riot police out in force, it was relatively calm in Dutch cities after three days of violent anti-lockdown protests during which nearly 500 people were detained https://t.co/3qH5F0uvVK pic.twitter.com/ffhyJv7NDm

Lockdowns have been ineffective at curtailing reported cases of the coronavirus. Now, there is science to back that up.

A peer-reviewed study from Jan. 5 from the European Journal of Clinical Investigation concluded it failed “to find an additional benefit of stay-at-home orders and business closures.”

The study looked at 10 different countries — one of them being the Netherlands — and concluded that lockdowns showed “no clear, significant beneficial effect.”

So why are national leaders closing businesses, instituting curfews and vilifying those who oppose such draconian measures as “scum?” That answer probably lies in Amsterdam, where like in this country, leaders don’t ever miss a paycheck.

But for the people struggling with the mental and financial strains of isolation, being called “scum” isn’t likely to send them home to peacefully protest by binging Netflix and filling up on hachée.

The Dutch, like people in this U.S. and other European nations, not so long ago enjoyed relative freedom from tyranny. It’s a predictable story when after almost a year, and with no science to back you up, your people revolt after you treat them as children with curfews and forced financial ruin.

The Dutch government is engaged in a game of chicken with its citizens, and for now, no side seems to be backing down. The government seems to be so entrenched that civil war, per Jorritsma, is preferable to easing authoritarian mandates.