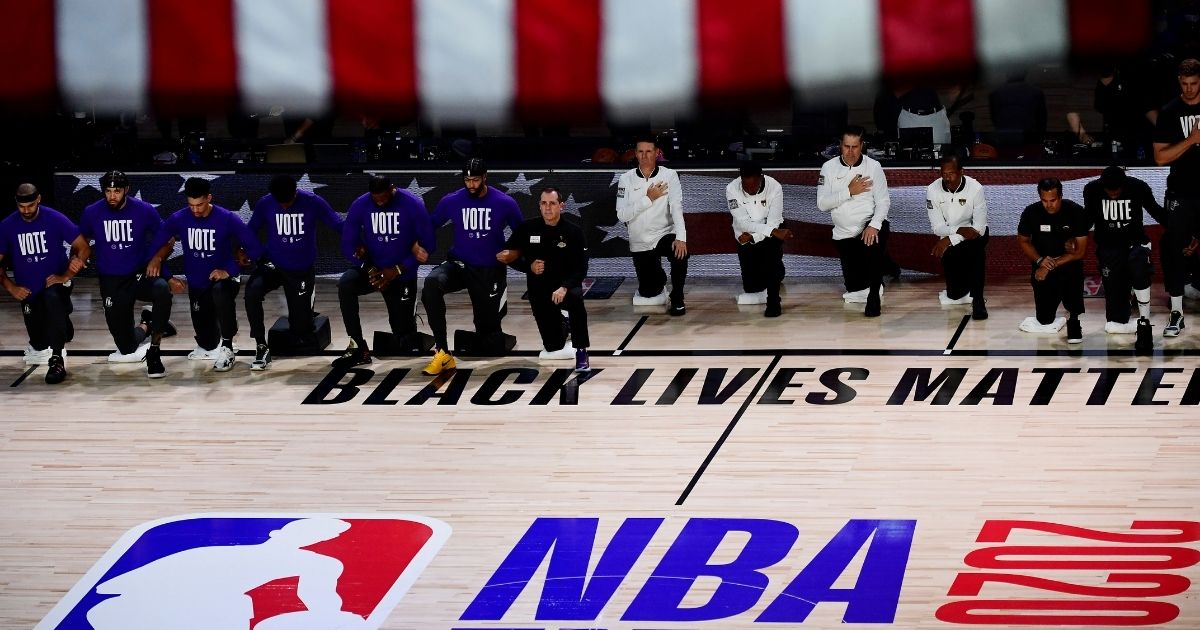 The NBA Finals on ABC continue to smash records, but not for the reasons those in the league offices would like.

The NBA, which seemingly has given this year’s nationwide riots, looting and assaults on police officers its full endorsement with its embrace of the Black Lives Matter movement, managed to upstage its horrid Game 1 record low in viewership with even fewer viewers for Game 2 and Game 3 of the series.

The Friday night Game 2 between the Los Angeles Lakers and the Miami Heat was much closer with regard to the final score than the opening game.

The Heat made a contest of their 48 minutes on the court with superstar LeBron James and his teammates, but few people saw it, relatively speaking.

Fox News reported that Friday night, only 6.07 million people tuned in to watch wealthy athletes castigate them over the issues of race and perceived police brutality.

That was down 56 percent from last year’s Game 2 matchup between the Toronto Raptors and Golden State Warriors, which drew 13.9 million viewers, according to Deadline.

(Other outlets, including OutKick, reported the Heat-Lakers game had 4.5 million viewers, but an NBA official told Fox that number was from early fast-affiliate data.)

The opening matchup of the Heat-Lakers series Wednesday had 7.4 million viewers on ABC.

Have you been watching the NBA Finals?

Each game’s viewership has been a low mark for a league that just a few years ago was enjoying massive popularity.

To play the devil’s advocate, let’s concede that the BLM-NBA is not a fall league, and it doesn’t generally compete with Major League Baseball and the NFL. This year, it’s doing so because of the coronavirus pandemic.

Darren Rovell, a sports analyst for The Action Network, made that argument on Twitter.

“The NBA is all of a sudden competing with the NFL and MLB playoffs and the reason people aren’t watching is because of their stance on race and politics. Yeah ok….” Rovell said.

The NBA is all of a sudden competing with the NFL and MLB playoffs and the reason people aren’t watching is because of their stance on race and politics. Yeah ok….

But Outkick founder Clay Travis, who is also known for his commentary on current events, smashed that defense.

“On Friday night the NBA had 4.5 million viewers for the Finals, the least viewed NBA Finals game in forty years, down nearly 70% from game two last year. The only pro sporting event the NBA was competing with was Cardinals-Padres. It’s 100% the politics. Get woke, go broke,” Travis responded.

On Friday night the NBA had 4.5 million viewers for the Finals, the least viewed NBA Finals game in forty years, down nearly 70% from game two last year. The only pro sporting event the NBA was competing with was Cardinals-Padres. It’s 100% the politics. Get woke, go broke. https://t.co/9ZBlWmVBbw

Isn’t it fun to watch the blue checkmarks go at it on Twitter?

Travis had a good point. Plus, millions of people are at home because of the coronavirus, and for sports fans, more sports is always a good thing. No rabid sports fanatic has ever argued against more sports on TV.

I spent the entirety of the 2014 NBA playoffs raising a toddler and working at home, and my claim for a successful spring/summer was that I watched every play of every series from April through June.

This summer, however, the league’s stars unmasked themselves as leftist activists, and now I’d celebrate with glee if my former team, the Oklahoma City Thunder, were sold back to the previous ownership group in Seattle/CHOP.

My college football team of 32 years, the Oklahoma Sooners, stormed out in their first game wearing Black Lives Matter patches on their jerseys on Sept. 12. I took down the old OU flag and put away years of gear.

The perennial also-ran Sooners are now 1-2, and I’m LOL-ing that I’m not part of it.

Sports were the escape from the world for so many of us.

With many events being so dark these days, fans arguably need sports right now more than ever.

But the leftist unmasking occurred, and it coincides with a sharp drop in television ratings for professional basketball.

NBA players have essentially asked fans to choose between them and their leftist activism, or us and the country we love.

For many of us, it’s an easy decision.

The decision to embrace leftist politics has made the league — and James, its biggest star — toxic.

That was the fourth year in a row the same two teams had met in the Finals, and it drew triple the viewership that Friday’s matchup featuring James did.

Viewer fatigue of the same matchup four years in a row wasn’t enough to crater the NBA’s ratings, but it looks like the league and its star player’s politics have.

James has only missed the Finals once since 2011, which was last year. Ratings for the league were healthy throughout that entire stretch.

In his second stint in Cleveland, each Finals series averaged between 17 million and 19 million viewers, according to annual ratings posted by Sports Media Watch.

This year, the face of the NBA has been suiting up in a fan-less arena in Orlando, Florida, and millions of fans the league once could count on are not watching.