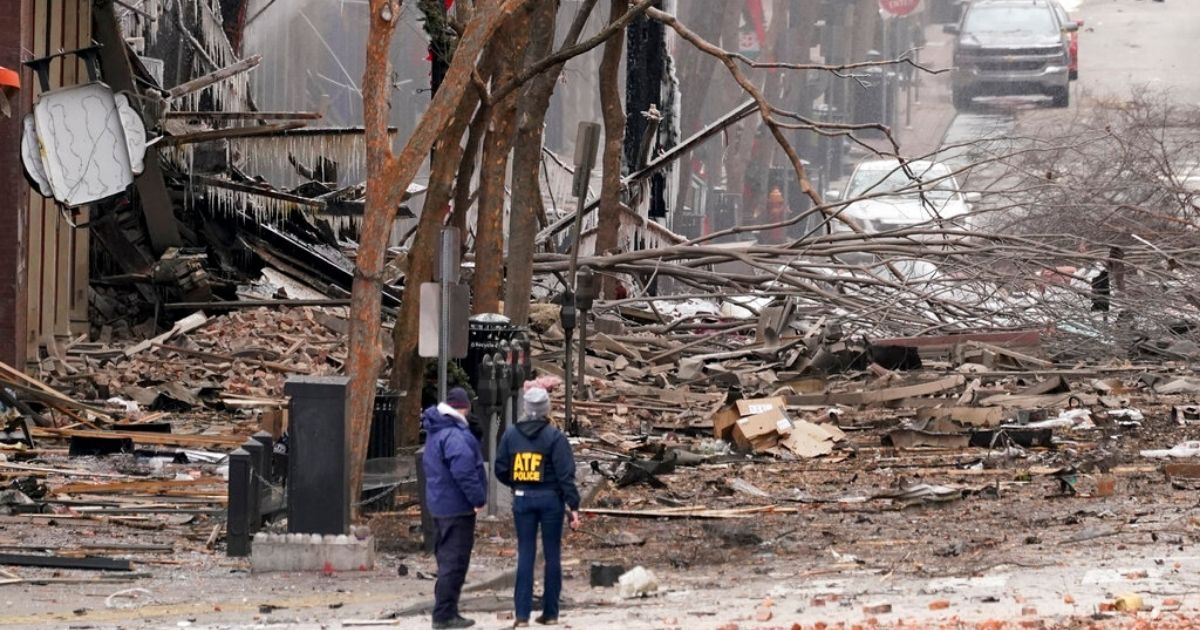 The mystery surrounding a Christmas day bombing in downtown Nashville, Tennessee, continues to grow, as details reported about the alleged perpetrator shed little to no light on what might have happened — or why.

At 6:30 am local time on Friday, a recreational vehicle packed with explosives detonated after issuing audio warnings to evacuate the area. The FBI has been investigating the bombing, which injured a handful of people and damaged roughly 41 buildings in the area.

The New York Post identified the suspect in the bombing as 63-year-old Tennessean Anthony Quinn Warner. Warner, according to the FBI, died in the blast, which was reportedly confirmed by DNA testing on human remains at the scene.

The fact that the suspect did not seem out to take human life, other than apparently his own, is odd for the kind of crime that took place. But to add to the mystery, Warner reportedly used his final days to square up his private matters, and in ways that give no clear answers.

Over the last year, he reportedly transferred the deeds for two homes in the area to a  young music industry executive living in California, according to the Post. That woman, strangely, claims she has no connection to Warner.

Michelle Swing, the benefactor of the apparent generosity, is 29 and is originally from Tennessee. She now lives in Los Angeles, according to the UK Daily Mail. The two properties she was gifted total $400,000 in value.

Both homes were on the same street in the Nashville suburb of Antioch, but the outlet reported Swing said she did not know the man who made her the owner of a property which is now the epicene of an investigation, the New York Post reported. One of the properties was later involved in a legal dispute between Warner and his mother.

“In the state of Tennessee you can deed property to someone else without their consent or their signature or anything,” Swing told the Mail. “I didn’t even buy the house, he just deeded it over to me without my knowledge. So this is all very weird to me, that’s about all I can say.”

Reports portray Warner as having been a quiet computer geek with one drug arrest in the 1970s. He quit his job as an IT consultant for a reality company this month without notice or an explanation, The Tennessean reported.

Are we left with more questions than answers?

The Tennessean spoke to Warner’s neighbors, who described a man who had become a hermit recently. He reportedly built a gate on the fence around his home and his RV — the home which is owned by Swing.

The RV that was stored at the property is the same vehicle investigators say exploded on Friday.

One of Warner’s neighbors, a man named Steve Schmoldt, told the paper the 63-year-old IT professional was “a little odd.”

“You never saw anyone come and go,” Schmoldt said. “Never saw him go anywhere. As far as we knew, he was kind of a computer geek that worked from home.”

Schmoldt also said neighbors did not notice the RV had left the property until after the blast when the police came knocking.

“To be honest, we didn’t really pay any attention … it was gone until the FBI and ATF showed up,” the man said.

A former high school coach of Warner’s named Charlie Bozman also spoke to The Tennessean about the mystery man blamed for the damage in Nashville.

“What I can remember about him was essentially three things: quiet, polite, and I don’t like to use the term, but quite frankly nerdish,” Bozman said. “He was a very reserved person. He wasn’t outgoing around me … I never had any discipline problems with him whatsoever, but that whole group was all great kids.”

The FBI has been quick to declare that not only did Warner die in the blast, but that he acted alone. No motive has been assigned for the alleged bombing, other than a report that Warner might have feared the 5G technology now being used by some mobile phone networks.