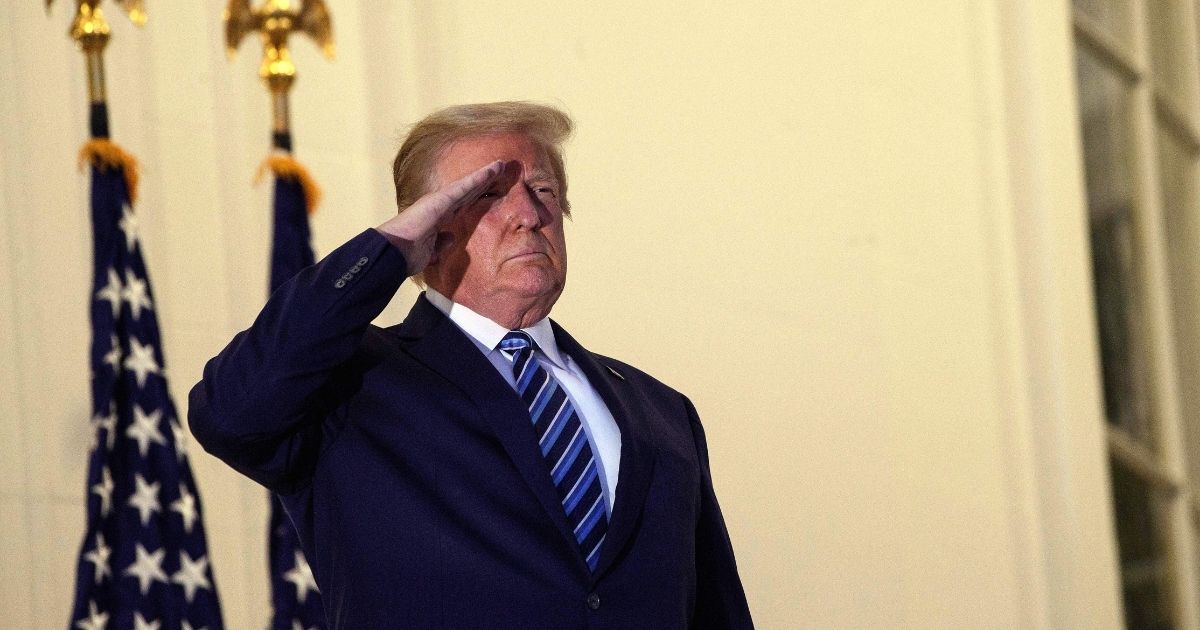 When it comes to melodrama, MSNBC can’t help itself.

While the sane part of the country celebrated the return of President Donald Trump to the White House on Monday after his weekend of COVID-19 treatment at the Walter Reed National Military Medical Center, MSNBC host Joy Reid engaged in some gutter-level sniping that likened a Trump salute to the crew of Marine One to a fascist salute from decades past.

But thanks to social media, she didn’t get away with it.

“The ReidOut” anchor’s offensive remark came during her voiceover of Trump’s arrival at the White House, when he paused on a balcony to salute the crew of the helicopter that carried him.

It’s a gesture of respect from the commander in chief to the men and women in uniform who serve the country, and one performed by every president upon leaving a military transport.

(Many might recall Barack Obama even did it with a cup of coffee in his hand, earning national derision for the “latte salute.”)

Now with mask off, Trump stands on White House balcony to watch Marine One depart pic.twitter.com/WnTSP3UEgc

But for Reid and the liberal fanatics in her audience, Trump’s utterly appropriate display of military respect called to mind the fascist rallies of Benito Mussolini’s Italy in the decades before and during World War II.

BREAKING VIDEO: Trump salutes Marine One after taking his mask off. MSNBC calling it a “Mussolini Moment.”CNN calling it “something out of North Korea.” pic.twitter.com/Y9Q9cd7lrG

“This is a Mussolini moment,” Reid said, according to Grabien. “Donald Trump, who looks like he has makeup on, which means somebody had to get close enough to make up his face with his favorite orange patina, he’s standing there as if he is a member of the old Russian czar family.”

Mussolini? The Romanovs of Russia? Liberals must be running out of dictators to smear the duly elected American president.

But as has been the case for the entirety of the Trump presidency, the snarky commentary from the left was thrown right back, this time by Twitter users with maybe a bit more understanding of the scene than a Trump Derangement Syndrome victim like Reid could hope for.

⚠️Paying respect to those pilots’ dedication, and the pilots were without a doubt proud to do their job…⚠️

Good Lord he’s telling our nation and world leaders that the sheriff is back. For a guy that espouses American traditions & values there’s no way he’s a Mussolini. Harris is the one u need to be worried about along w/ a majority of blue state governors & politicians.

Ahh yes. Mussolini was also a Journalist so what does that say about journalism

It’s probably too much to expect liberals to be familiar with the details of Mussolini’s biography (like the fact that he was a socialist before taking the logical step to fascism).

That he died a brutal, debased death at the hands of Italian communists is probably all they’re interested in.

And another opportunity to liken Trump to a dictator from years gone by must have been too difficult to resist for a liberal like Reid – even if she was denigrating the military service and Trump’s role as commander in chief in the process.

But maybe it wasn’t the salute Reid didn’t understand? Maybe it was the balcony setting she didn’t like?

This might come as a shock, but Donald Trump isn’t the first president to ever set foot on a balcony.

Did they say the same for these shots?https://t.co/KWO3IvDsOB

The mainstream media wasn’t filled with fascist analogies back then.

This one summed things up perfectly:

I’m constantly amazed at the casual and consistent use of extreme hyperbole any time Trump does anything.
The contrast between the portrayal and reality is so striking, I can’t understand how anyone falls for it, unless they are so blinded by hate to be completely irrational.

Obviously, liberals love to make lame comparisons between Trump and the monsters of the past, like Hitler and Mussolini.

But what they invariably miss — or deliberately ignore — is that the most infamous dictators, the most notorious mass murderers in history, are from the left end of the political spectrum: Hitler (the National Socialist), the Soviet Union’s Joseph Stalin, and Mao (the godfather of today’s Communist China).

Those men’s careers — and body counts in the tens of millions — might give a hint about the endgame for the kind of philosophy and policies Trump and his supporters are battling as the 2020 election approaches.

But knowing that would require the kind of intellectual effort, and intellectual honesty, that seems beyond the capabilities of the modern leftists.

It’s much easier to play on human emotions, to substitute sound drama for honest dialogue.

And when it comes to drama, a liberal outlet like MSNBC just can’t help itself.