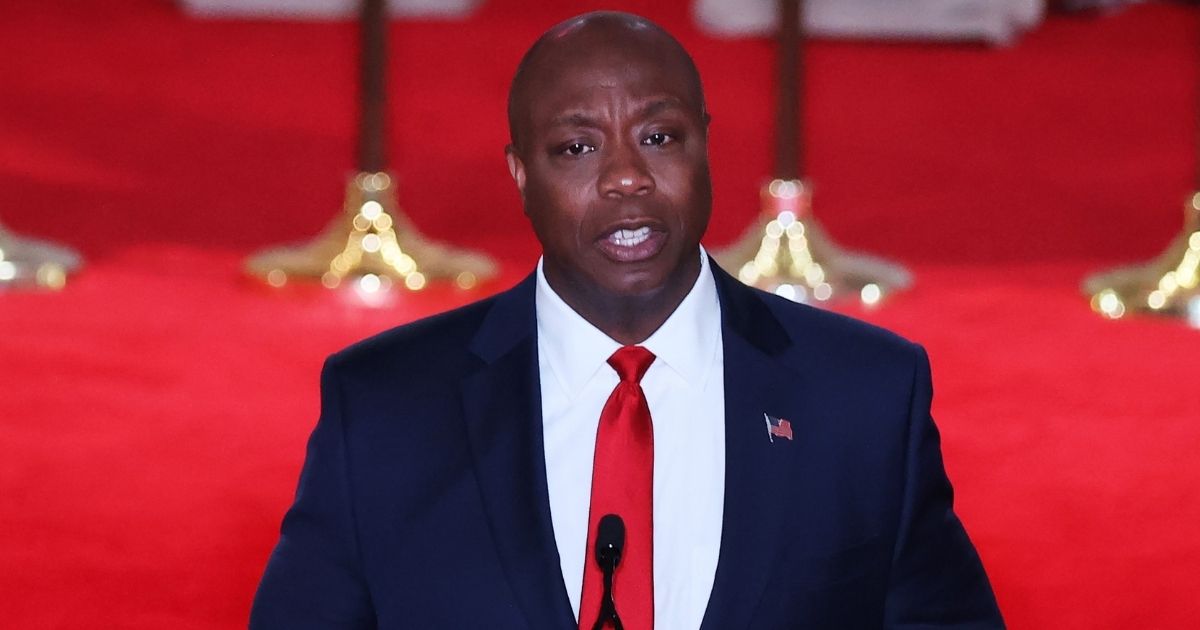 It’s not a particularly new observation to note that Democrats have been trying to prove South Carolina GOP Sen. Tim Scott right ever since his response to President Joe Biden’s address to a joint session of Congress.

Scott, you may recall, said America isn’t a racist country, even though he’d experienced racism — including, he noted, from the left side of the aisle.

“I’ve also experienced a different kind of intolerance. I get called ‘Uncle Tom’ and the N-word by progressives, by liberals,” Scott said, according to a transcript of the speech. “Just last week, a national newspaper suggested my family’s poverty was actually privilege because a relative owned land generations before my time. Believe me, I know firsthand our healing is not finished.”

In the hours following Scott’s speech, “Uncle Tim” trended on Twitter. The next day, “The View” co-host Joy Behar — Cap’n Blackface herself — decided to lecture Scott on racism, apparently unaware of the optics of a white woman telling a black man what racism is really like.

I can’t claim any originality for noting the demented desire among liberals to prove Scott right, because plenty of folks have. I’m curious, however, why they keep on doing it days after his speech — and not only that, but ramping up the race-baiting, too.

On Saturday, MSNBC’s Tiffany Cross took her first extended on-air shots at Scott’s speech. What it lacked in timeliness it made up for in the sheer viciousness of ad hominem invective hurled at Scott by a fellow black American.

Cross said that Scott “sounded a stone fool” during the speech and criticized “the hollow institution that resides inside” his head. She then launched into a spiel that all but called Scott “Uncle Tim,” albeit without using those specific words:

— The Cross Connection with Tiffany Cross (@CrossConnection) May 1, 2021

“Tim Scott does not represent any constituency other than the small number of sleepy, slow-witted sufferers of Stockholm Syndrome who get elevated to prominence for repeating a false narrative about this country that makes conservative white people feel comfortable,” Cross said.

“Because when you speak an uncomfortable truth, like Nikole Hannah-Jones, the party that Scott claims is not racist gets big mad and tries to silence you. Just this week, Senate Minority Leader Mitch McConnell asked Education Secretary Miguel Cardona to scrap teaching the ‘1619 Project’ in schools because it would re-orient the view of American history.

“Lucky for McConnell, he has his own tap dancer to try and re-orient the view of America for him.”

It’s interesting that we’re told Nikole Hannah-Jones — the vaunted saint of the left — is telling truths so allegedly discomfiting for those in power that her “1619 Project” is a curriculum component for many schools. Scott is playing it so safe, meanwhile, that it’s perfectly OK for an MSNBC host to call him a “tap dancer.”

And it got worse from there, with Cross calling Scott a “token” and claiming that the legendary Harriet Tubman would have abandoned him on the Underground Railroad if he were a slave in the South during the slavery era.

“There were so many contradictions in the senator’s speech that it was clear not even Scott believed the words he was speaking,” Cross said.

RELATED: MSNBC Host Ruthlessly Mocked After Admitting She Wears 2 Masks While Jogging Outside

“I could go into great detail refuting each of his asinine points, but he did that for me — and moreover, a lesson I’ve learned, don’t argue with people Harriet Tubman would have left behind. And sure, Tim Scott has spoken out about his encounters with law enforcement and he co-sponsored an anti-lynching bill in the Senate, but there are two sides to every token.

“So thirsty for white approval, this dude actually stood on the national stage to defend the voter suppression law in Georgia,” she said, going on to repeat the fiction that election integrity bills are “to keep people who look like him out of the ballot box.”

“But please, Senator, say more about how un-racist the country is while you trot out that tired line about going from cotton to Congress to clown. Perhaps this was merely Sen. Scott’s audition to be Sam Jackson’s understudy in the film ‘Django [Unchained],’” she concluded, comparing him with Samuel L. Jackson’s house slave in the Quentin Tarantino movie.

Should liberals denounce this kind of racism from their own ranks?

There are a few things that probably stood out for you in the Cross peroration, and most of them are racial slurs. Here’s one thing you might not have noticed: Over a period of roughly three minutes, Cross cited two facts to rebut Scott. I don’t mean that in the sense of “here are two facts from her rant that need to be examined,” I mean there were two (2) concrete rebuttal facts in total.

The first was that GOP Senate Minority Leader Mitch McConnell sent Education Secretary Miguel Cardona a letter which, in part, singled out the Department of Education’s approval of the “1619 Project” in its Proposed Priorities, according to CNN. This is both accurate and wholly extraneous.

The second was that “361 bills were being introduced in 47 states to keep people who look like him out of the ballot box.” And here again we have the lie — fact-checked to death at this point — that the Georgia election law, and by extension every election integrity bill in the United States, is aimed at preventing black people from voting. Cross added nothing to the debate about those bills, merely assuming her audience was a simpatico one.

You could make an argument that perhaps her line about the “domestic violent extremism that the Department of Homeland Security is investigating within its own ranks” constitutes a third fact, but considering she gets it wrong — there’s no evidence the DHS actually has violent extremism within its own ranks, according to Reuters, merely that the investigation exists —  let’s not spot her that.

In everything else, was Cross pointing to parts of Scott’s response and saying, in effect, “yeah, but he’s not a real black person.”

Tim Scott may have her skin color, but if he’s an elected conservative, Tiffany Cross thinks Harriet Tubman would have ditched him and left him to deal with the slave-catchers. At one point, she even says Scott “has spoken out about his encounters with law enforcement and he co-sponsored the anti-lynching bill in the Senate.” No counter-argument to that, just a snide bit of racism: “There are two sides to every token.”

This is all ad hominem stuff, and racially inflammatory at that. Yet, Cross claims she could “go into great detail refuting each of his asinine points, but he did that for me.”

Maybe she missed Scott’s point about having “experienced a different kind of intolerance” and being “called ‘Uncle Tom’ and the N-word by progressives, by liberals,” but I’d consider that one especially unrefuted.