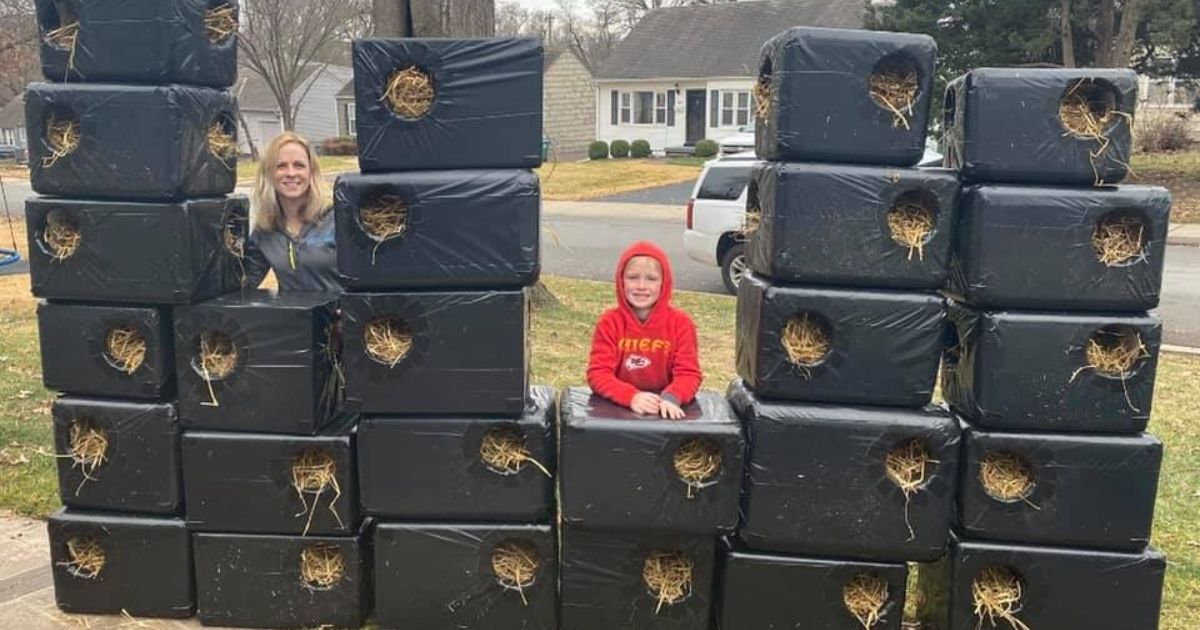 Duct tape, styrofoam coolers and black trash bags are all pretty basic materials that many families have lying around in one form or another — especially the styrofoam coolers, which tend to outlive their usefulness tucked away in garages and forgotten in closets.

But there is a kind-hearted and noble use for them that has started to take off in communities that care about the local animal life. Stephanie Lindquist-Johnson of Roeland Park, Kansas, is one of those people.

She and her nearly 6-year-old son, Phillip, have a heart for cats, particularly strays and kitties looking for new homes.

While the mother-son duo volunteer at Another Chance Cat Rescue, they found another way to help stray cats as well as “really anything with four paws” last year as the cold weather set in, according to what the mother told The Kansas City Star.

First, she made a request on Nextdoor asking locals for any extra styrofoam coolers they might have hanging around.

Then she started forming little houses out of the donated coolers, taping them together with duct tape, cutting circular entrances and exits, and using heavy-duty trash bags to wrap the constructions.

The houses are well-insulated and protected from the elements, and once they’re done, Lindquist-Johnson stuffs them with straw and then hands them out to people who want to place these small animal shelters where they are needed.

“I feel so sorry for all the animals out there,” Lindquist-Johnson explained. “It’s been so cold.”

Once people realized what she was doing, they donated both supplies and funds so that she and her son could continue their heartwarming efforts.

RELATED: This Crazy New App May Finally Tell You What Your Cat Is Trying To Say

“I’m kind of addicted to making them and we’re having fun with it,” Lindquist-Johnson continued. “I’ll keep making them as long as I don’t go into terrible debt.”

She posted photos of the finished products on Facebook.

“We have made over 44 shelters for homeless stray and feral cats this season,” she shared on Dec. 12.

“Today we dropped off 26 shelters for a project warmth event that The Humane Society of Greater Kansas City and Great Plains SPCA HERO team will have this Sunday, December 13.

“So many people within our NextDoor community have continued to support this much needed cause by donating supplies and making cash donations so we can continue to make these.”

Thanks to Stephanie and Phillip, plenty of critters have had cozy places to call home and weather the winter.