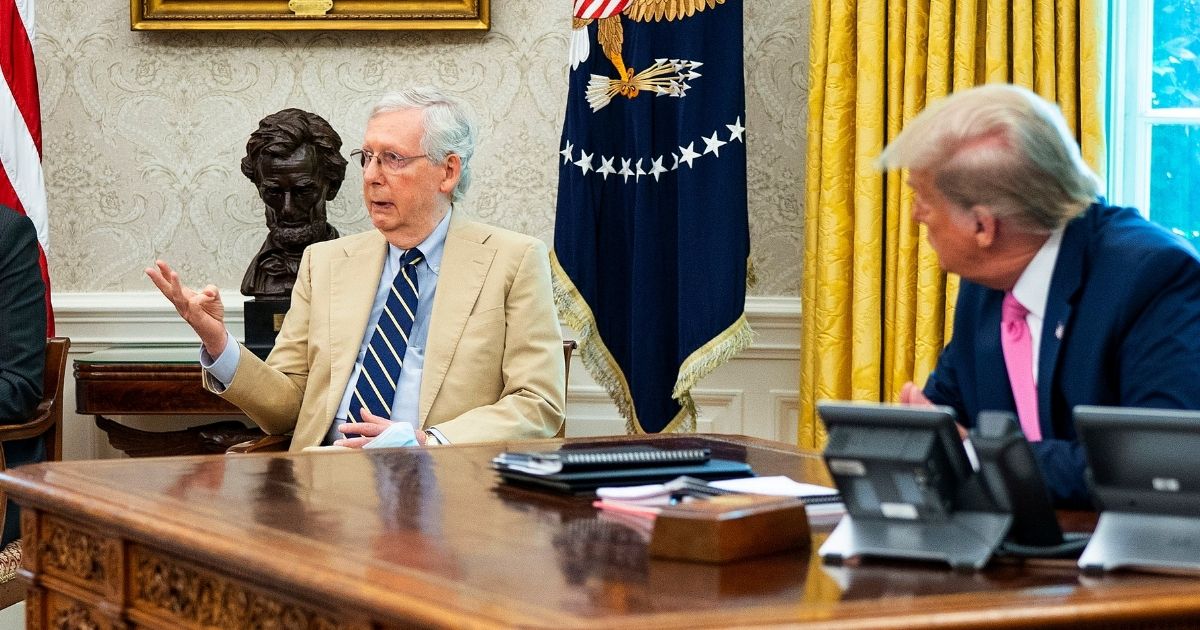 President Donald Trump may be impeached a second time by Democrats, but it’s unlikely he’ll be convicted and a near impossibility he’ll be removed from office before his term expires.

That’s the message from Senate Majority Leader Mitch McConnell to Senate Republicans as House Democrats circulate articles of impeachment over the Capitol incursion on Wednesday.

The movement to charge Trump with incitement over a speech he gave supporters Wednesday before the violence started originally looked as if it was unlikely to succeed. As NPR‘s Laurel Wamsley noted Wednesday, regarding Democrat Rep. Ilhan Omar’s move to impeach: “Without the support of the House leadership, Omar’s efforts are likely to go nowhere, and Trump has just two weeks left in office before his term ends and Biden is inaugurated as president.”

However, calls for Trump’s impeachment picked up steam as a consensus grew on the left that the president could be impeached and convicted even after he left office.

Democrats are hoping for a swift removal, as evinced by Omar’s tweet. The Minnesota Democrat wrote that Trump could not be allowed “to remain in office, it’s a matter of preserving our Republic and we need to fulfill our oath.”

I am drawing up Articles of Impeachment.

Donald J. Trump should be impeached by the House of Representatives & removed from office by the United States Senate.

We can’t allow him to remain in office, it’s a matter of preserving our Republic and we need to fulfill our oath.

NPR’s Wamsley also didn’t predict that House Speaker Nancy Pelosi would pivot toward making impeachment a legislative priority. On Friday, Pelosi said that if Trump didn’t resign “imminently and willingly, the Congress will proceed with our action” to impeach.

“It is the hope of members that the president will immediately resign,” Pelosi said in a statement, according to The New York Times. “But if he does not, I have instructed the Rules Committee to be prepared.”

Do you think Democrats will impeach Trump again?

Whether or not this is part of Pelosi’s political theater in the wake of the incursion — she dramatically made a show of talking to Joint Chiefs of Staff chairman Gen. Mark Milley about a plan to stop the genuinely bonkers theory that Trump might be “ordering a nuclear strike” before leaving office, and then informed the media about the conversation — this appears to an urgent matter for the 117th Congress.

Apparently, those $2,000 checks or any sort of deeper coronavirus relief package weren’t really a priority.

The reason Pelosi’s focus on removal falls under the category of performance art is simple: While a simple majority of House members can impeach the president, his removal wouldn’t just require a vote of two-thirds of the Senate to convict. It would require a 100 percent vote to even consider impeachment before the day prior to Trump leaving office.

“The Senate is currently in recess and is holding pro forma sessions every three days until January 19. Pursuant to the unanimously approved order setting up the recess and these pro forma sessions, the Senate may conduct no business until January 19,” McConnell wrote in a letter to Senate Republicans about how the caucus would legally “dispose of any articles of impeachment” prior to Jan. 20, according to Fox News.

A “pro forma session,” which derives its name from a Latin term meaning “in name only,” can be held for various reasons, but the end result is the same. Literally nothing gets accomplished.

If you’ve ever seen one of these on C-SPAN, it’s the definition of anti-climax. If you haven’t and feel you have 2:44 of your life to waste, here’s a Senate pro forma session from 2008 which will provide you with a bit of hissing silence and remind you that once upon a time, Joseph Lieberman was a vice presidential candidate:

What will happen, if the House votes to impeach Trump, is that the articles will be delivered to the Senate. You may remember that less than a year ago, House Democratic

McConnell’s letter, however, was a reminder that the House would be delivering those articles this time to a Senate holding only pro forma sessions.

That’s because, as McConnell said in his letter, the Senate would need unanimous consent of its membership to conduct “any business of any kind” before the next regular session.

“Assuming such unanimous consent is not given,” McConnell wrote, no scenario would unfold until “the Senate resumes regular session on January 19.”

He added that unless the articles were transmitted on Jan. 19 and Chief Justice John Roberts was empaneled to start a trial on the same day, the trial would “begin after President Trump’s term has expired.” After the trial began, the Senate “shall continue in session from day to day (Sundays excepted)… until final judgment shall be rendered.”

Current Minority Leader Chuck Schumer, the New York Democrat who will take over as Senate majority leader after Democratic Georgia Sens.-elect Jon Ossoff and Raphael Warnock are sworn in later this month, did not respond to a request for comment, Fox reported.

There are several questions in play here, none of which point to Trump being removed from office before Jan. 20 and some of which call into question how constitutional (not to mention worthwhile) a second impeachment would be.

The first is whether the House would be able to bypass hearings before the Judiciary Committee before an impeachment vote. However, as Nicholas Fandos notes over at The New York Times, such hearings aren’t constitutionally required — and given the Democrats control the House, committees haven’t even formed yet and that the 117th Congress was only sworn in on Jan. 3, this likely won’t be an impediment.

The second, however, is whether or not the Senate would agree to suspend pro forma sessions and hear debate on impeachment. This is a more significant hurdle, even though there appear to be some Republicans who say they’ll vote to convict. More on that later, but in case you can’t see it, let me explain the hurdle in two words: Josh Hawley. Does anyone who watched the events of the past week really see the Missouri Republican agreeing to start an impeachment trial before Jan. 19?

That, then, leads into three more questions: Whether or not you can stage an impeachment trial for an ex-president, whether or not Democrats can get a conviction and whether it would be worth it.

On the first issue, since it’s never been tried, nobody knows — but it’s not necessarily constitutional terra nova. As an NBC News report Saturday pointed out, President Ulysses S. Grant’s war secretary, William Belknap, was impeached for graft minutes after he submitted his resignation. The House proceeded with its impeachment and he was tried by the Senate, although ultimately not convicted.

Then comes the issue of whether Democrats can secure a conviction. The thinking behind a second impeachment is that the dynamic is different this time around, given the incursion on the Capitol, the president’s speech to the protest that turned into the Capitol riot and the collapse of GOP support for him.

Would it be worth it? If Democrats could secure conviction, they could also preclude Trump from running for office again by a simple majority vote of the Senate, since those convicted are subject to “disqualification to hold and enjoy any Office of honor, Trust or Profit under the United States,” as per Article I, Section 3 of the Constitution.

At The Times, Fandos speculates that this would be “an appealing prospect not just to Democrats but to many Republicans who are eyeing their own runs.” This assumes the sentiments of Americans and their legislators, less than a week after the Capitol incursion, would hold throughout the slog of a Senate trial, which would be unlikely to be fast-tracked the same way articles of impeachment could be in the House.

The incoming Biden administration and congressional Democrats would have to defend focusing on the logic of spending legislative bandwidth trying to impeach a departed president when they promised “unity” at an abstract level and action on pandemic relief at a practical one.

For his part, Biden might not be quite as senescent as usual on this topic. CNN reported that unidentified sources “familiar with the matter” said the president-elect “has no appetite for opening an impeachment proceeding against Trump.”

Whatever the case, impeachment won’t go anywhere before Jan. 19, no matter how much House Speaker Pelosi and the Democrats want to fast-track it. The Senate will be in pro forma sessions and Mitch McConnell has no intention of urging it to be roused from that slumber. After that, there’s one day until Trump’s term ends.

Impeachment makes for a lot of great soundbites. As for great legislating or great politics? Hardly.