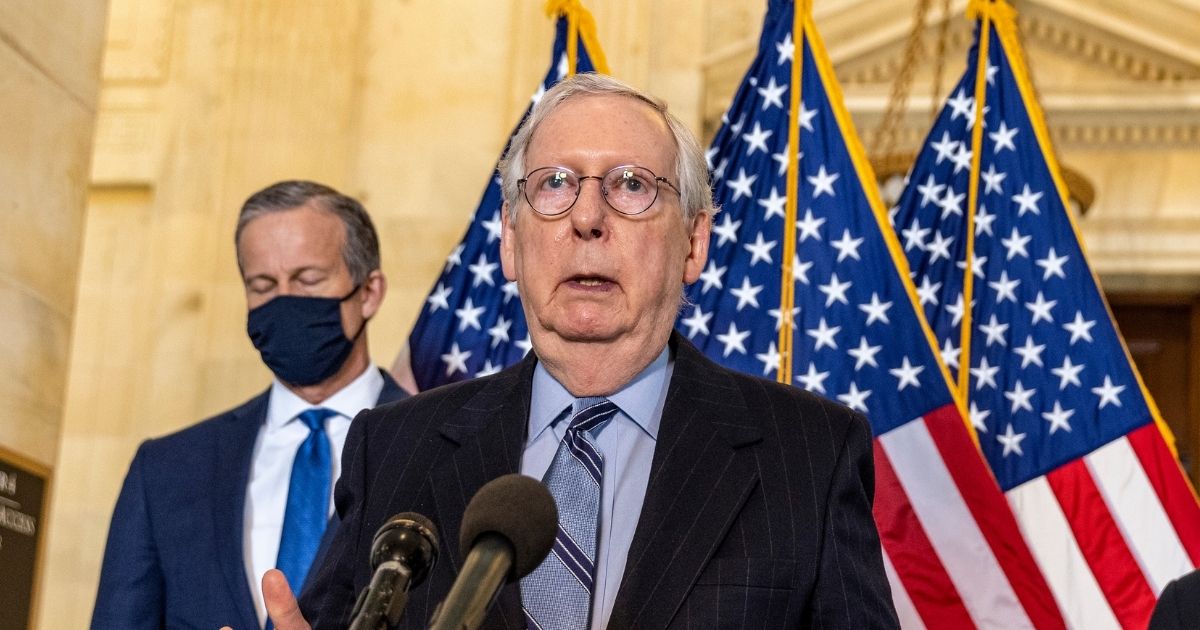 But the Biden agenda? Not so much.

“I like him personally, I mean, we’ve been friends for a long time. He’s a first-rate person,” the Kentucky Republican said of his former Senate colleague, according to The Hill.

“Nevertheless, this is a bold, left-wing administration. I don’t think they have a mandate to do what they’re doing.”

“Problem is I don’t get to set the agenda anymore,” McConnell says when asked what his agenda is.

McConnell also pointed to the fact that Democrats hold the House by a slim margin, and in the 50-50 Senate, Vice President Kamala Harris can give them a win in tie votes if a simple majority is required for passage.

“I don’t think the American people gave them a mandate to drive our country all the way to the political left,” he said. “I’m going to fight them every step of the way.”

McConnell, likening his role to that of a “defensive coordinator,” said with Biden in the White House, and the GOP relegated to a minority, Republicans are in “a reactive mode.”

Do you think the GOP will really fight against Biden’s tax increases?

“I would love to find some things that we can agree on,” he said, but there are “big philosophical differences and that’s going to make it more and more difficult for us to reach bipartisan agreements.”

Democrats are “going in exactly the wrong direction,” McConnell said.

“I think that package that they’re putting together now as much as we would like to address infrastructure is not going to get support from our side because I think … the last thing the economy needs right now is a big whooping tax increase on all the productive sections of our economy.”

Biden is planning on imposing the largest tax increase in U.S. history.

No President has ever raised taxes as an answer to an economic downturn, & yet that’s what Biden is doing.

McConnell said Biden’s tax increase proposal and the way Republicans reacted to it “underscores the principle difference between the two parties.”

“You’re either alarmed about the level of national debt and the future impact of that on our children and our grandchildren or you aren’t,” he said, according to Politico. “My view of infrastructure is we ought to build that which we can afford, and not either whack the economy with major tax increases or run up the national debt even more.”

On Wednesday,  McConnell said while Biden’s tax plan carries an “infrastructure” label, that’s not what it is really about.

The Biden plan to raise taxes on businesses after a year of shutdowns will be the final blow to many businesses and jobs. When I’m governor I’ll lower taxes and fight for our workers against the radical left’s socialist agenda.

“It’s like a Trojan horse,” he said, according to the New York Post. “It’s called infrastructure, but inside the Trojan horse it’s going to be more borrowed money, and massive tax increases on all the productive parts of our economy.”