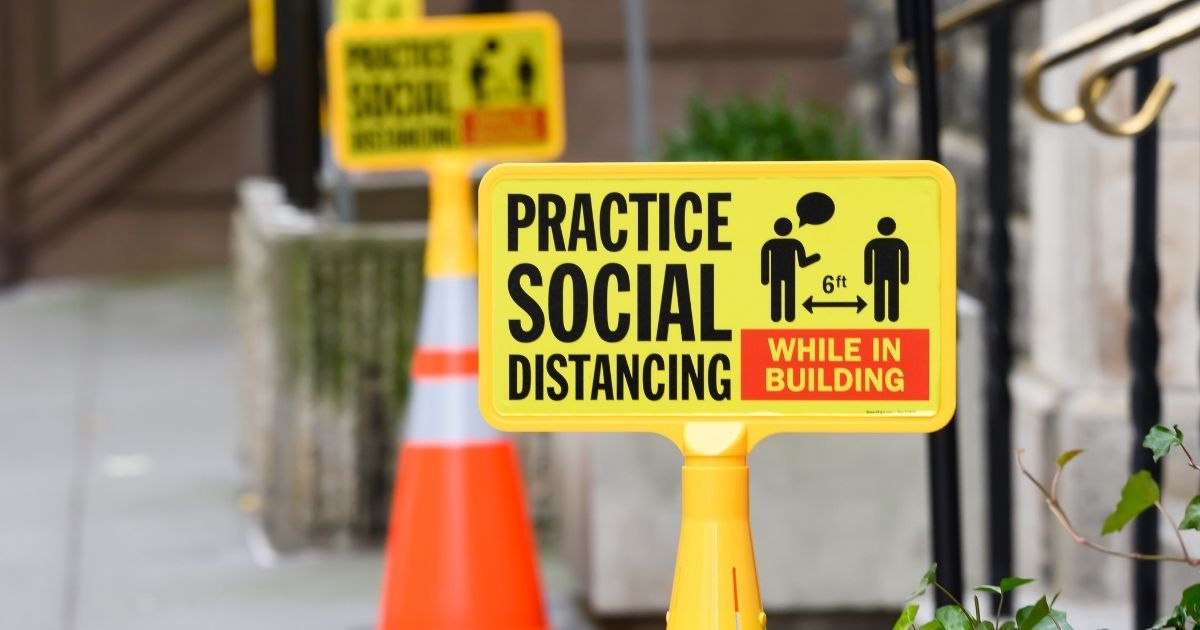 Six-foot social distancing rules that panic-stoking Democrats and their media minions have browbeaten Americans to follow are based on pseudoscientific hogwash, according to a new MIT study.

Moreover, the indoor capacity limits that forced the shuttering of restaurants, bars, gyms, churches and schools were unnecessary, according to the researchers.

Bazant, who teaches chemical engineering and applied mathematics, said the 6-foot rule defies science and common sense, especially if you wear a mask.

“We argue there really isn’t much of a benefit to the 6-foot rule, especially when people are wearing masks,” Bazant told CNBC last week.

“It really has no physical basis because the air a person is breathing while wearing a mask tends to rise and comes down elsewhere in the room so you’re more exposed to the average background than you are to a person at a distance.”

Bazant said the longer you spend indoors in close proximity to an infected person, the greater your chances of contracting the virus.

However, the risk of transmission can be mitigated by wearing a mask, opening windows or using fans to keep the air moving.

He said the “6-foot rule” is arbitrary since the science behind it was nonsensical.

“This emphasis on distancing has been really misplaced from the very beginning,” he said. “The CDC or WHO have never really provided justification for it.

“They’ve just said this is what you must do, and the only justification I’m aware of is based on studies of coughs and sneezes, where they look at the largest particles that might sediment onto the floor, and even then, it’s very approximate. You can certainly have longer- or shorter-range, large droplets.”

In the case of someone sneezing or coughing, Bazant said, social distancing “isn’t really helping you that much, and it’s also giving you a false sense of security because you’re as safe at 6 feet as you are at 60 feet if you’re indoors. Everyone in that space is at roughly the same risk, actually.”

RELATED: Arizona School Board Cancels Prom for COVID, But Throws Party for Superintendent

Bazant added that social distancing when outdoors — especially if you’re masked — is “kind of crazy.”

“If you look at the air flow outside, the infected air would be swept away and very unlikely to cause transmission,” he told CNBC. “There are very few recorded instances of outdoor transmission.”

He added: “Crowded spaces outdoor could be an issue, but if people are keeping a reasonable distance of, like, 3 feet outside, I feel pretty comfortable with that even without masks, frankly.”

This means there was no reason for Democratic Gov. Gavin Newsom to close beaches and state parks in California.

Similarly, there’s no reason a vaccinated person should wear a mask during a video call when he’s thousands of miles away from other participants, unless he’s trying to virtue-signal really hard.

Pres. Biden masks up for a video call to discuss climate change with world leaders

He appears to be the only one wearing a mask pic.twitter.com/TGGuM7BW0x

The professor said the CDC and WHO guidelines that have been rigorously imposed to justify mass shutdowns seem to be based more on “fearmongering” than on scientific data.

“What our analysis continues to show is that many spaces that have been shut down in fact don’t need to be,” Bazan said.

“Oftentimes the space is large enough, the ventilation is good enough, the amount of time people spend together is such that those spaces can be safely operated even at full capacity and the scientific support for reduced capacity in those spaces is really not very good,” he said.

He underscored that it’s important to relay accurate information to the public instead of recklessly stoking panic and hysteria.

“We need scientific information conveyed to the public in a way that is not just fearmongering but is actually based in analysis,” Bazant said.