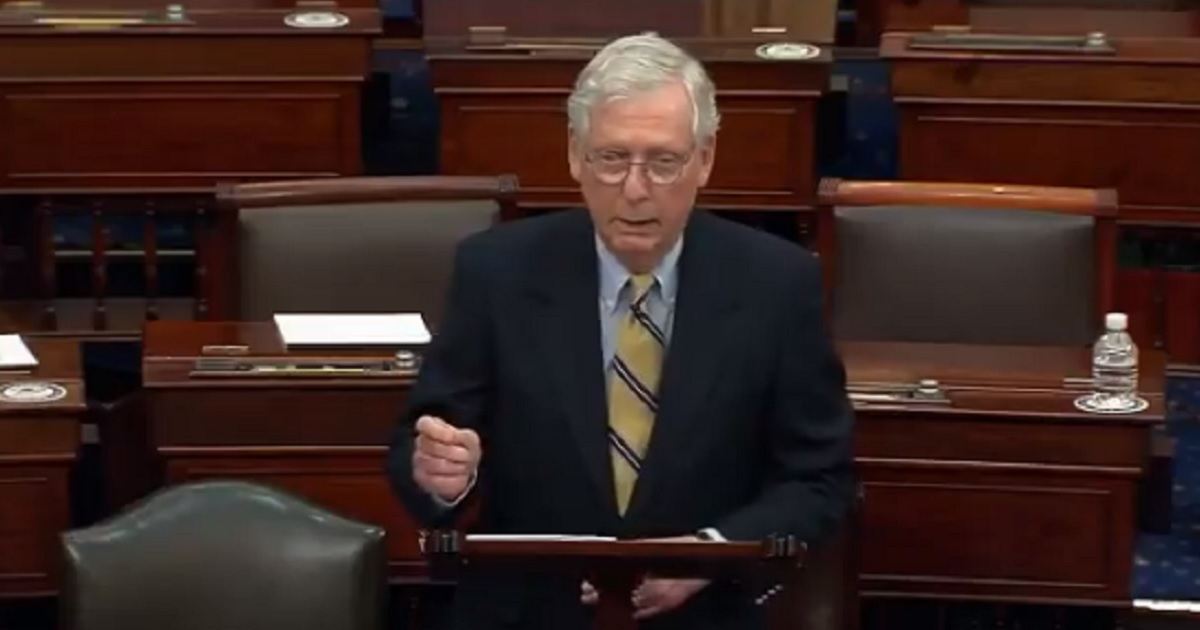 Senate Minority Leader Mitch McConnell on Saturday attacked former President Donald Trump’s conduct on the day of the Capitol incursion, even as House Speaker Nancy Pelosi said McConnell’s “pathetic” tactics were the reason Trump was not tried while still in office.

Trump was acquitted Saturday in his second Senate impeachment after a 57-43 Senate vote failed to reach the two-thirds majority required for a conviction.

After the vote, McConnell, who voted to acquit Trump, blamed Trump for the events of Jan. 6, saying the crowd that stormed the Capitol “had been fed wild falsehoods by the most powerful man on Earth — because he was angry he’d lost an election.”

In remarks delivered on the Senate floor posted on his website, McConnell said, “Former President Trump’s actions preceding the riot were a disgraceful dereliction of duty.”

Sen. Mitch McConnell: “There’s no question, none, that President Trump is practically and morally responsible for provoking the events of the day.” pic.twitter.com/WJKPGXGNcE

McConnell said, criminal charges aside, “There is no question that President Trump is practically and morally responsible for provoking the events of that day. The people who stormed this building believed they were acting on the wishes and instructions of their President.

“And their having that belief was a foreseeable consequence of the growing crescendo of false statements, conspiracy theories, and reckless hyperbole which the defeated President kept shouting into the largest megaphone on planet Earth,” he said, later adding,  “The leader of the free world cannot spend weeks thundering that shadowy forces are stealing our country and then feign surprise when people believe him and do reckless things.”

Are all these comments political posturing?

“Sadly, many politicians sometimes make overheated comments or use metaphors that unhinged listeners might take literally. This was different. This was an intensifying crescendo of conspiracy theories, orchestrated by an outgoing president who seemed determined to either overturn the voters’ decision or else torch our institutions on the way out,” McConnell said.

He said Trump’s “unconscionable behavior did not end when the violence began.”

Trump “did not do his job,” McConnell said. “He didn’t take steps so federal law could be faithfully executed, and order restored. Instead, according to public reports, he watched television happily as the chaos unfolded. He kept pressing his scheme to overturn the election!”

However, McConnell said that there was a difference between excoriating Trump and convicting him in an impeachment trial.

“This body is not invited to act as the nation’s overarching moral tribunal. We are not free to work backward from whether the accused party might personally deserve some kind of punishment,” he said.

“If President Trump were still in office, I would have carefully considered whether the House managers proved their specific charge. By the strict criminal standard, the president’s speech probably was not incitement. However, in the context of impeachment, the Senate might have decided this was acceptable shorthand for the reckless actions that preceded the riot.”

McConnell then said he did not have to make that call.

“But in this case, that question is moot. Because former President Trump is constitutionally not eligible for conviction. There is no doubt this is a very close question. Donald Trump was the President when the House voted, though not when the House chose to deliver the papers,” McConnell said.

“We have no power to convict and disqualify a former officeholder who is now a private citizen.

McConnell said the Senate  “resisted the clamor to defy our own constitutional guardrails in hot pursuit of a particular outcome. We refused to continue a cycle of recklessness by straining our own constitutional boundaries in response. The Senate’s decision does not condone anything that happened on or before that terrible day. It simply shows that Senators did what the former president failed to do: We put our constitutional duty first.”

Pelosi, in a statement on her website, said McConnell had sought to dodge his own culpability.

“Senate Republicans’ refusal to hold Trump accountable for igniting a violent insurrection to cling to power will go down as one of the darkest days and most dishonorable acts in our nation’s history,” she said.

“Tragically, Senate Republicans who voted not to convict chose to abandon the Constitution, the Country and the American people with this vote,” she said.