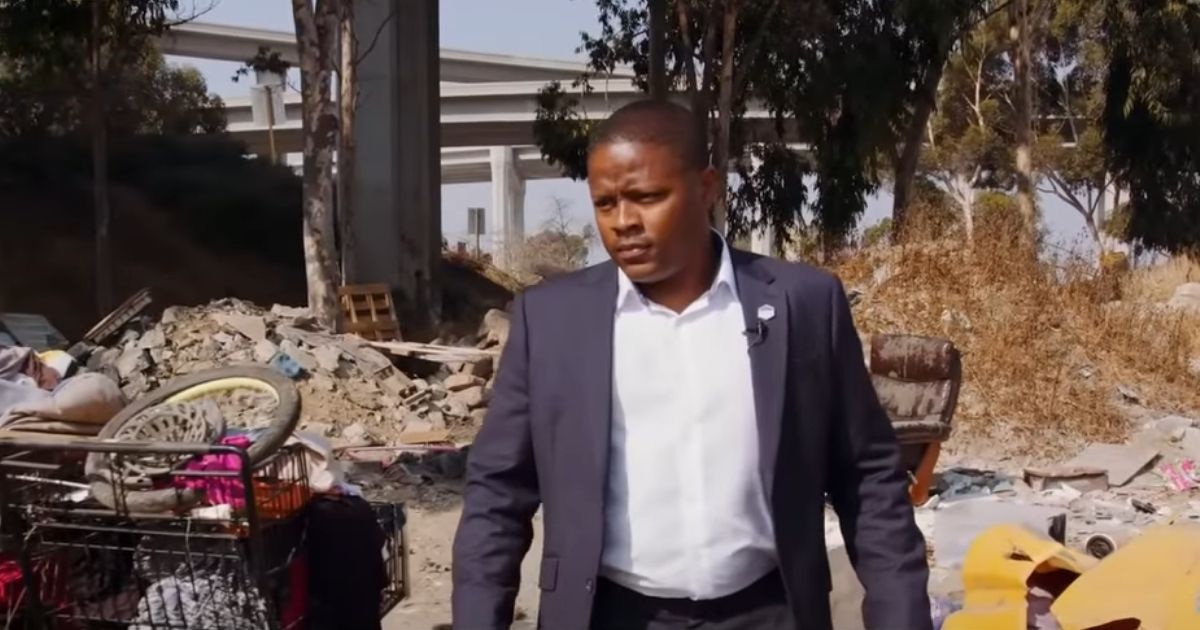 Collins took his campaign to Democratic Rep. Maxine Waters’ front door — the mansion she lives in, which is located outside of the boundaries of the 43rd Congressional District that she represents.

In the four-minute video, Collins contrasts his qualifications with those of Waters and notes that amid rising crime, the district needs something more than the same old same old.

Do you know where I am?
Maxine Waters’ $6 Million Mansion.

Do you know where I’m NOT?
Her District.

Mansion Maxine Waters doesn’t live in her District — I do.

My name is Joe Collins and I’m running for Congress against Maxine Waters.

“I was born right here in South LA, in a place Maxine refuses to live,” Collins said. “Maxine Waters does not drink our water. She does not breathe our air. And while she sits here in her mansion, our district is in ruins.”

Collins said he is giving back because he was one of the few who made it out.

“I survived Maxine’s district, graduated high school, went on to join the U.S. Navy. I fought for this country,” he said. “But while I was fighting for this country, Maxine Waters could not be bothered to fight for her own district here in America.

“And when I returned from war, I came back to my community as a war zone.”

Collins said the numbers show that Waters — who called for President Donald Trump’s impeachment from the moment he took office — has not been paying attention to the needs of her district.

The president is a deranged lunatic & he’s inspired white supremacists to violence, the latest of which was a plot to kidnap Gov. Whitmer. These groups have attempted to KILL many of us in recent years. They are following Trump’s lead. Dems & GOP must agree to push for 25th Amdt!

“Just this year, deadly crime spiked 15 percent in South LA, much of it due to gang activity,” he said in the video. “The homicide rate in South LA has shot up by 53 percent. South LA has the highest poverty rate in the city with a crippling 43 percent of its residents living below the poverty line.

“Meanwhile, LA County has a homeless population of over 40,000 people. Homelessness rates have increased by 264 percent since 2009.”

Collins said that while the district implodes, Waters is too removed to care.

“Maxine doesn’t care about our district,” the candidate said. “She only cares about herself and using our tax dollars to buy mansions. While Maxine fails to lead, riots and violence surge in our streets. While our buildings and businesses burn, Maxine sits safe in her mansion guarded by the same police she demonizes.”

As noted by the Los Angeles Times, federal law does not require congressional candidates to live in the district they represent.

Do you think Collins makes a strong case for why voters should choose him over Waters?

“Maxine has never had to deal with violence or riots in her neighborhood,” he said. “That must be nice. But this is the way the rest of us live. We need someone to represent us who lives here, who fights here, who wants to improve our way of life. Someone who understands we need safe streets and a strong economy.”

Collins, who ended his service with the Navy as a recruiter, began as a mechanic, according to his campaign website.

“Joe began his career specializing as a naval jet aviation mechanic, working on and then training thousands of sailors on aircraft including the F-18 Super Hornet fighter, E-6 Mercury Airborne Command Post, and MH-60 Sea Hawk Assault Helicopter,” the site says. “As a leader in uniform he obtained several military and civic certifications, becoming a licensed financial planning professional and a certified counselor for rape and sexual assault victims. While earning numerous awards and commendations, Joe embraced his role as a top Navy recruiter whereby he had the honor of jump-starting the careers of many who have since gone on to become fine American leaders.”

“After the divisiveness and rancorous rhetoric of the 2016 election, Joe empathized with many disenfranchised Americans, feeling the stinging aftermath of that highly polarized climate that continues to be exhibited today.

“Joe recognizes several alarming factors about the country’s current state of affairs: the media’s role in escalating unwarranted public anger; the gap between party lines that has become much more difficult to bridge; the lack of politicians listening to their constituents with an empathetic ear; and, with most politicians simply talking without purpose or a plan for the future.”