LoyalEFX is a brokerage that offers trading services for multiple asset types, including forex, stocks, and crypto. However, in its short operating time, the broker has managed to cement a pretty negative reputation for itself. In our LoyalEFX review, we’ll go over the broker in detail and check out why they’ve earned such a negative public opinion. 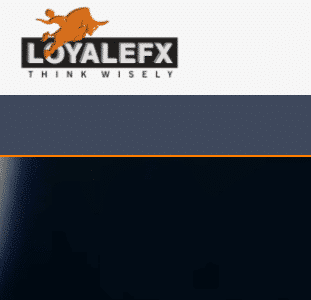 The first cracks appear as soon as you enter the broker’s website. The designer hired did a pretty clumsy job at making a functional webpage. The front page auto-refreshes every couple of seconds because it has a few looping videos. Instead of preloading, whenever the video switches, the page restarts, interrupting whatever you are doing. For anyone that’s used the internet, it’s pretty apparent how quickly that can get frustrating.

Furthermore, the webpages are unreasonably slow. Using LoyalEFX might cause some nostalgia towards the days when you had to use dial-up connection. Even with pretty quick internet speeds on our part, each transition took five to ten seconds, no matter how lite the page we attempted entering was. You might think we’re overplaying it, but we suggest you try using LoyalEFX’s website for a few minutes.

The site simply functions like something from the previous decade, which is quite disappointing for a broker attempting to be competitive. However, that’s not even the worst part, as you could at least somewhat overlook the clunkiness if the broker was good in other areas. But as you might’ve already concluded, it’s really not. We’ll elaborate on that statement further down the line, but let’s at least give the broker a shot. We went to LoyalEFX’s “Why LoyalEFX” page and checked out their self-proclaimed strengths:

The broker’s first paragraph talks about how the company offers top-notch security to its customers. It says that the broker is under the watch of the Financial Services Authority (FSA) Seychelles authority. In itself, that’s quite strange as the broker claims its offices are in the UK and USA. However, those claims become even more ridiculous as you investigate the brokerage further. We’ll provide you with a few more details about security in the next section of our LoyalEFX review.

The next paragraph is literally just a feel-good text without much substance. It sounds more like someone pitching you a scam than a serious attempt at self-promotion. It talks about how trading can change your life, how you can be your own boss, etc. Of course, it fails to mention anything about the potential negatives. It even outrageously states that trading is extremely safe and recession-proof.

The broker’s next selling point is about how it doesn’t use a dealing desk, making it an STP brokerage. While STP brokerages are vastly preferred and considered superior to dealing desk brokerages, that shouldn’t be a selling point. If you’re an experienced trader, you probably already know why, but for newcomers, we’ll elaborate. The vast majority of popular brokers are STP. Simply put, it’s like a dentist advertising that they’ll give you anesthesia before taking out your tooth instead of just yanking it out.

The broker also seems quite proud to announce that it has mobile trading capabilities. Along the same lines as the previous clause, it’s probably more difficult to find a modern brokerage that doesn’t have those. As such, while it’s nice to mention, it shouldn’t be anywhere near the main selling point. As this is the final point in their “Why Us” page, we can conclude this section by saying the broker didn’t give us anything of substance. All the points the broker uses to promote itself are vague or common feel-good claims that are likely aimed to bait novices.

Earlier in our LoyalEFX review, we mentioned some security issues regarding the broker. It’s time to elaborate, and there’s quite a bit to unpack here. Let’s start with the most apparent issue first, with the broker’s horrible lack of information. As you could’ve noticed from their pro’s, the brokerage didn’t state anything of substance about their trading specifications, for example. While you may write that off as a fluke, it’s actually a consistent trend throughout LoyalEFX’s website.

You can hardly find anything meaningful about the broker. An example of that is the account info, which is under the trading drop-down menu. There’s the small issue of displacement, but also the much larger issue of there not being any info. There are three buttons: Start Trading, which takes you to the platform sign-in, Live Account, which does the same, and Demo Account, which directs you to a sign-up page. An additional example of that is each of their asset class pages offering a description instead of a list.

You can find similar issues throughout the service, and what little info is available is scattered seemingly at random. That’s already significantly dangerous, and we didn’t even get to the point where the broker isn’t only secretive but misleading. For example, it states that it operates from the UK and US while not offering their services to either country’s residents. Additionally, it states its parent company is regulated in the Seychelles without ever saying what the parent firm is.

It was also busted on multiple attempts at fraud, including faking FCA regulations and false positive review spam. And even with the fake reviews, its reputation is resoundingly negative. The collective evidence is more than enough for us to deem that LoyalEFX is nothing more than a scam.

As we previously stated, there’s no direct information about the account typing, at least where you’d expect it. However, if you happen to press the packages button, you’ll find out the broker did actually bother to disclose some details. However, even there, you can see a lack of clear information, which we can only assume is intentional at this point.

The only concrete thing you can see is the price of each account, with its the lowest sitting at $150 and the priciest at $50,000. So you might wonder, what’s the difference between those two?  Well, for dropping fifty grand, you get access to premium daily analysis and customer support, a dedicated account manager, and access to the trading center. Still, have no clue what any of that is? Neither do we, as not one of those claims gives you an exact picture.

Also, there’s not one word about any of the trading-related conditions you can get. On a slightly less important note, the webpage looks like something straight out of the 2000s, which just shows carelessness.

Moving onto the trading conditions, there’s more of the same incomplete information that sounds good to people that have never touched a trading platform before. The only detail that we actually managed to catch is that the spreads go down to 0.0, which is highly unlikely. Some sources state that the broker has a 1:400 leverage, which is only slightly below what you’ve come to expect.

However, since the conditions most likely scale through account types, there’s no way of telling how much you need to invest to get what you’re comfortable with. Even then, we’d strongly suggest against giving even a dime to LoyalEFX, as there’s a good chance you won’t see any money coming back.

LoyalEFX uses a proprietary platform called Xone Trader (or perhaps X-One Trader, or some variation). To check out its functionality, you’d need to sign up for a demo account and hand over a bunch of personal info. We suggest avoiding that unless you’re comfortable with your personal data being leaked or sold. However, if the broker’s website functionality is an indicator of its platform’s quality, things are looking grim.

Earlier in our LoyalEFX review, we mentioned an issue with how the broker presents its assets. It displays the classes without mentioning what’s inside each particular category. Even worse, it doesn’t even do the bare minimum in informing us about the total number of trading instruments. The alleged trading product classes the broker offers are:

LoyalEFX’s customer support structure is pretty regular, with a 24/5 work time. You can reach the team by using email, live chat, or telephone.

It’s been a while since we’ve seen a scam as poorly executed as LoyalEFX. The broker seems like it didn’t even do the bare minimum it could to try and convince traders to sign up. We honestly can’t even imagine people who have never traded before to fall into this trap. The website is broken and full of typos, while info about the service is entirely hidden. The entire thing looks like it was hastily put together by someone with a partial idea of what they were doing.

Unless you’re a fan of getting your money stolen, stay clear of LoyalEFX. There are more than enough alternatives, and you can use our other reviews as pointers towards finding a quality brokerage.