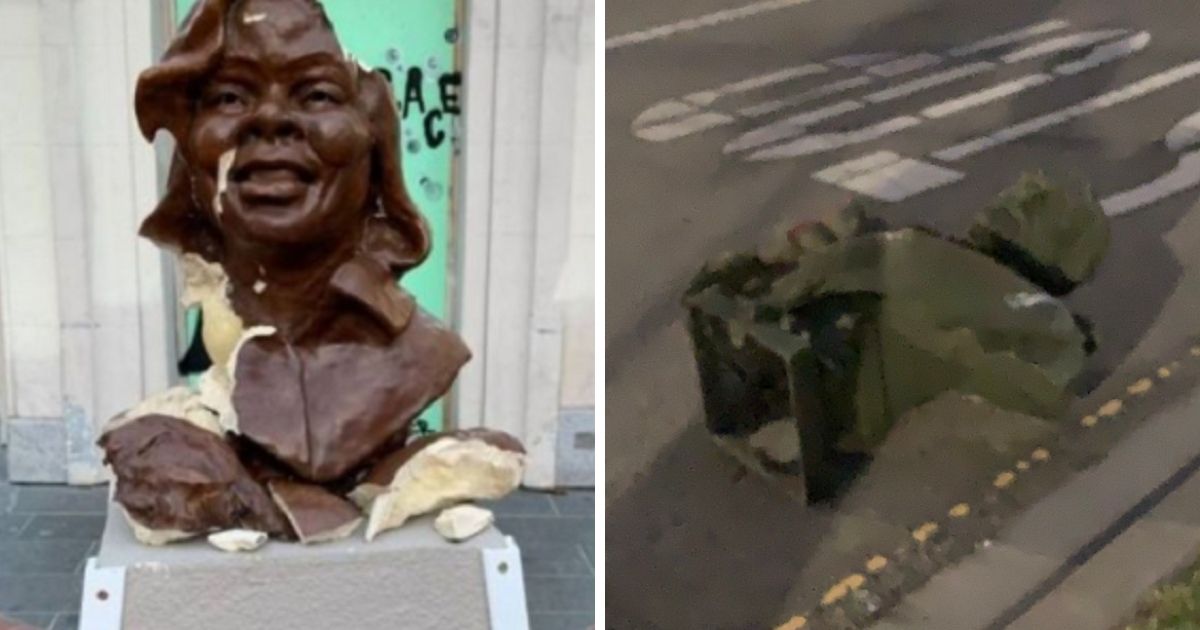 San Francisco’s CBS affiliate showed its liberal bias this week when reporting that a ceramic bust of Breonna Taylor, the woman killed during a police raid and shootout earlier this year in Kentucky, was smashed in downtown Oakland on Monday.

The likeness of Taylor, who was 26 when she died after her boyfriend Kenneth Walker and police exchanged gunfire during a raid in Louisville in March, was placed in downtown Oakland near Latham Square just two weeks ago.

It was essentially destroyed in an attack discovered Saturday morning and police are investigating, according to KPIX-TV. But the way the outlet reported the incident is quite different from how it reported on the destruction of other monuments in the San Francisco Bay Area this year.

For starters, KPIX-TV headlined the Taylor bust story on its website: “Oakland’s Ceramic Bust Of Breonna Taylor Smashed In Brazen Act Of Vandalism.”

Oakland police are investigating an act of vandalism that left a ceramic bust of Breonna Taylor severely damaged and a community outraged. https://t.co/TKVgIiWCoM

“Looks like they hit it with a baseball bat along the back,” the bust’s creator, a sculptor named Leo Carson, told the station. KPIX-TV reported Carson is convinced the attack is a display of racism against the Black Lives Matter movement.

“I don’t think there’s a single person in Oakland who doesn’t know who Breonna Taylor is, and I don’t think you attack a sculpture like that by accident,” said Carson, who worked as a food server before the coronavirus pandemic shut down the restaurant industry. “And I think that it was an act of racism and an act of aggression and intimidation.”

The outlet also quoted an area attorney named Joe Cotchett who vowed his law firm would pay for the monument’s replacement.

Do you think the country’s establishment media can ever be trusted after the bias seen this year?

“It’s scandalous and outrageous that anybody would do such a thing… [Taylor] was a wonderful human being … The whole situation is preposterous — first her death, and now this,” Cotchett said.

A plaque that accompanied the bust read, “Say her name.”

Ironically, the anti-police crowd that often uses the phrase “Say her name” in reference to Taylor when defaming police officers as murderers and racists are now apparently looking to police for help with regard to catching the person who destroyed the bust.

But anyone looking at KPIX-TV’s coverage of this year’s much-publicized statue desecrations can spot that something is wrong here. The outlet’s coverage of those events carried a much different tone.

In that story, KPIX-TV noted, “The statues of Junipero Serra, Francis Scott Key [and Ulysses S. Grant] laid on the ground in the pre-dawn darkness of Golden Gate Park Saturday, toppled, broken and defaced by a large crowd of Juneteenth protesters who gathered Friday night to demand an end to racial injustice.”

The outlet made sure to note more than once that those responsible for the vandalism were “protesters.” When noting a statue of Christopher Columbus had to be removed by the city after it was targeted with threats, the outlet quoted the San Francisco Arts Commission as saying the Columbus statue “was removed because it doesn’t align with San Francisco’s values or our commitment to racial justice.”

Americans who know their history weren’t buying it.

He was a “slave owner” in that he was gifted a slave, hated the idea, and freed him within a year. Then won the Civil War, prosecuted the KKK, and appointed African Americans to prominent roles in government.

In a separate story about the Columbus statue removal, KPIX-TV reported, “The statue’s removal comes amid an ongoing push to remove monuments to historical figures associated with racial injustice, as the nation wrestles with questions about race following the death of George Floyd and weeks of nationwide protests against police brutality.”

When a small bust of one of the left’s heroes is attacked, it’s “brazen” and “vandalism.” When leftist mobs destroy longstanding statues of American icons, they’re “protestors,” and their actions are linked to a movement for “racial justice” and against “police brutality.”

The wording is clearly intentional, and the intent is just as clear: To manipulate viewers to be outraged at the former and understanding, even approving, of the latter. It’s not journalism, it’s propaganda — a cheap trick of words aimed at distorting American perceptions of reality.

That bias, which Americans have come to expect from mainstream media, played out over a series of months that culminated in KPIX-TV’s reporters and editors telling us and their community which side they’re on, and it isn’t the side of those who watched in horror this past summer to see America’s historical monuments destroyed.

Whether Breonna Taylor deserved a bust in Oakland was up to those living in that city. Monuments are physical representations of people and times cultures find value in. We’re currently living the history of those who will follow us, and apparently Oaklanders felt Taylor was worthy of being immortalized for future generations.

But Bay Area leftists and their biased CBS News affiliate seemed to at the very least tacitly support the destruction of property and the affront to history in June. Now, attacks on monuments are apparently inconceivable to them.

The solution here would be to obviously prosecute all people who destroy property, which should apply to the Taylor bust as well everyone who helped to topple a statue everywhere this year.

Had existing property laws been enforced, there likely wouldn’t have been a precedent to have motivated someone to go after one the left’s monuments in Oakland, if indeed the vandalism was politically motivated.