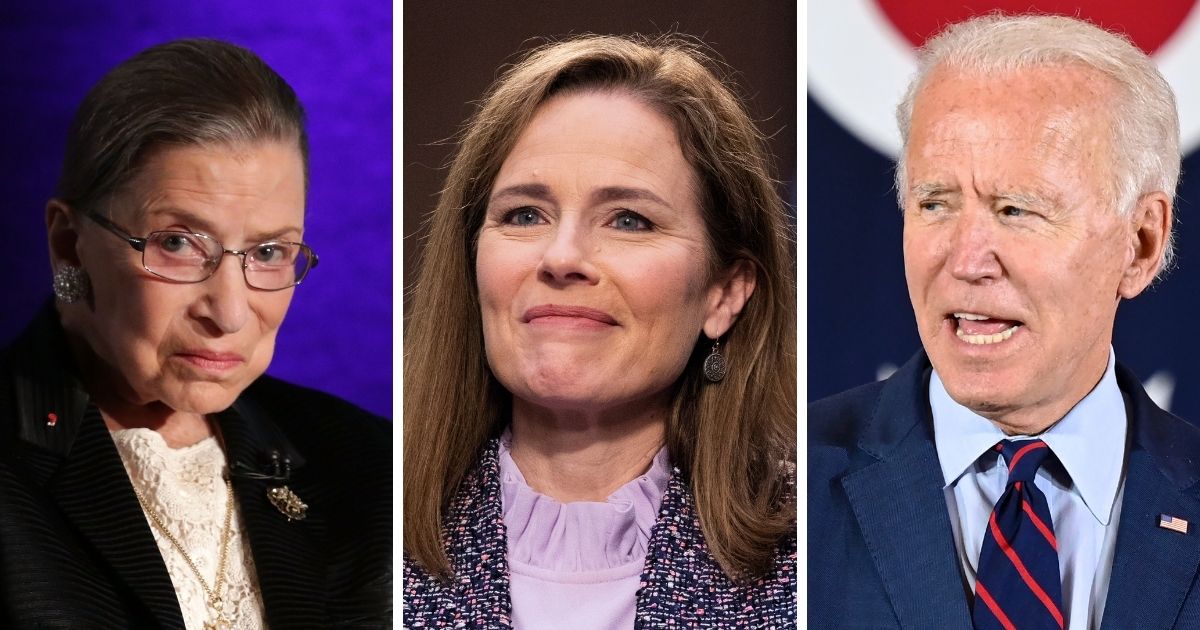 For Democrats and their mainstream media shills, Ruth Bader Ginsburg is coming back to bite.

As the Supreme Court nomination hearings for Circuit Judge Amy Coney Barrett go into their third day, liberals are trying to build a case that Barrett is being evasive with her consistent statements declining to take a position on hot-button issues liberals love.

But the words of the late Supreme Court Justice Ginsburg from her own confirmation hearings 27 years ago are backing Barrett up — and a quote from now-Democratic presidential nominee Joe Biden is helping, too.

There’s no shortage of Democrats on the Senate Judiciary Committee who are battering Barrett with questions about abortion, gun control or Obamacare (the monstrosity liberals insist on referring to the Affordable Care Act), but who’ve been shut down by Barrett’s invocation of what’s called “the Ginsburg rule.”

That’s a school of thought taken directly from Ginsburg’s hearings in 1993, when the then-Supreme Court nominee told senators: “A judge sworn to decide impartially can offer no forecasts, no hints, for that would show not only disregard for the specifics of the particular case, it would display disdain for the entire judicial process.”

But it looks like liberals in the establishment media either missed or are deliberately ignoring that lesson, and are now trying to smear Barrett’s studied silence as some kind of sinister deception, branding her behavior as “refusing to answer,” like she’s a criminal suspect under questioning by police.

Barrett refuses to give a straight answer on whether she agrees with Scalia (whom she clerked for) that Roe v. Wade was wrongly decided. Said she can’t “pre-commit” to approaching a case in a particular way.

“Barrett refuses to give a straight answer on whether she agrees with Scalia (whom she clerked for) that Roe v. Wade was wrongly decided,” wrote John Haltiwanger, senior politics reporter for the reliably liberal Business Insider.

“Said she can’t ‘pre-commit’ to approaching a case in a particular way.”

Taxpayer-salaried PBS reporter Yamiche Alcindor, as big a disgrace to journalism as any in the Washington media corps, also weighed in with her own slanted take.

.@SenFeinstein asks three times and counting: Do you agree with Justice Scalia’s view that Roe v Wade was wrongly decided?

Instead, Judge Barrett says: I can’t “pre-commit” and I have an “agenda” to decide cases as they come.

“Judge Barrett is refusing to answer.

RELATED: Biden’s Whopper on Amy Coney Barrett Couldn’t Even Get Past a CNN Fact Check

“Instead, Judge Barrett says: I can’t ‘pre-commit’ and I have an ‘agenda’ to decide cases as they come.”

Well, as much as the establishment media would like to pretend otherwise — since they see the Supreme Court as just a kind of super-legislature that can push the progressive program forward when it can’t win at the ballot box — what Barrett is describing is exactly what a judge is supposed to do.

As Ginsburg herself put it so eloquently almost three decades ago:

The Ginsburg Rule: “A judge sworn to decide impartially can offer no forecasts, no hints, for that would show not only disregard for the specifics of the particular case, it would display disdain for the entire judicial process.”pic.twitter.com/FcpzOg21in

The thing is, it wasn’t only Ginsburg who had that take on a Supreme Court nominee’s answers.

As pointed out Wednesday on Twitchy, the current Democratic standard-bearer for president had a similar argument.

In 1993 remarks that Biden might forget now, but which have been frequently quoted since when a Republican president makes a Supreme Court appointment, the then-Delaware senator and Senate Judiciary Committee chairman firmly backed Ginsburg’s refusal to discuss potential rulings.

“Judge, you not only have a right to choose what you will answer and not answer, but in my view, you should not answer a question of what your view will be on an issue that clearly is going to come before the court in 50 different forms, probably, over the next, over your tenure on the court,” Biden said.

Note that Biden didn’t slam Ginsburg for “refusing” to answer questions. He simply asserted what any honest person understands: To do the job they’re sworn, judges — especially Supreme Court justices — must approach each case based on the merits of the applicable laws.

That was a different time, of course.

Do you think Amy Coney Barrett is going to be confirmed to the Supreme Court?

Biden had a vested interest in shepherding the nomination of Ginsburg, the first by Democratic President Bill Clinton, over the finish line successfully.

Now, with his political ambitions on the line, Biden feels free to lie about Amy Coney Barrett’s record.

His running mate feels free to assail the nominee as a threat to her constituents because Barrett won’t commit to future rulings.

And, naturally, liberals in the media are shamefully willing to carry their water — as amenable to Democratic demands as they are unremittingly hostile to anything that comes out of the Trump White House.

This time, though, Barrett, Republicans and President Donald Trump have the words of Ginsburg — and Joe Biden himself — to fight back.