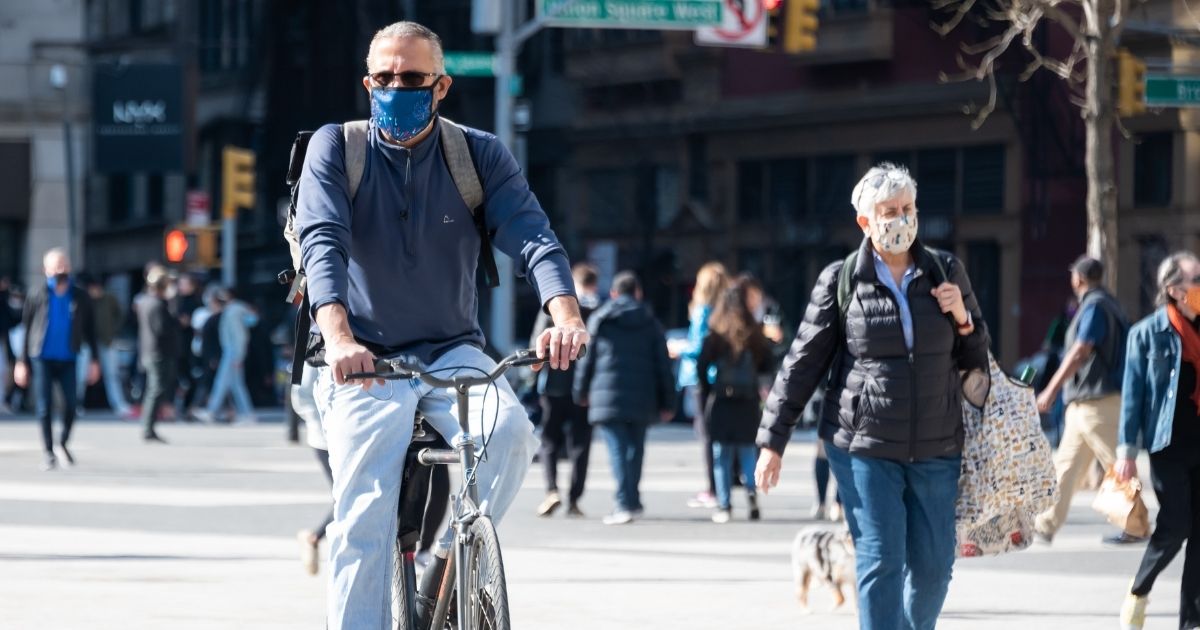 We’ve now endured a year of life-disrupting measures due to the coronavirus pandemic, which the country — and world — has adapted to. Sadly, it appears as though our own social lockdown measures created needless death and despair.

The cure was worse than the problem.

If you ask one Bloomberg columnist, who formerly worked as a columnist for The Economist, the nightmare will never end– and why should it? Everything is bad and sad and most definitely hopeless, despite the fact that states across the country are rolling back restrictions with great success.

Andreas Kluth, who writes opinions for the left-wing publication, argued Wednesday, “We must start planning for a permanent pandemic,” and he cited the emergence of these supposedly deadly new viral “variants” we keep hearing so much about.

“For the past year, an assumption — sometimes explicit, often tacit — has informed almost all our thinking about the pandemic: At some point, it will be over, and then we’ll go ‘back to normal,’” Kluth wrote. “This premise is almost certainly wrong.”

Kluth added that “even if [the coronavirus] peters out eventually, our lives and routines will by then have changed irreversibly.”

“Going ‘back’ won’t be an option; the only way is forward. But to what exactly?” Kluth asked.

Citing a study conducted in South Africa and published by vaccine maker Novavax which claimed that those with COVID-19 immunity could have no protection from many of these new variants, Kluth argued this leaves “only vaccination as a path toward lasting herd immunity.”

“And admittedly, some of the shots available today are still somewhat effective against some of the new variants. But over time they will become powerless against the coming mutations,” he added.

Do you think the establishment media would like the pandemic to continue forever?

Kluth of course neglected to mention that the study he cited stated its assumptions were “based on current expectations,” and that its expectations “are neither predictions nor guarantees of future events or performance,” according to Novavax itself.

He did, when apparently relying on pure conjecture, use the study to argue that because of the ever-emerging variants across the country and globe and because the virus is mutating in countries without vaccinations, we should assume that we’re all essentially doomed. Our vaccines, he argued, will not protect us from what will be a never-ending pandemic — even if it doesn’t kill everyone who dares to venture outside.

“The variants we know of have become more infectious, but no less lethal. From an epidemiological point of view, that’s the worst news,” Kluth concluded.

Is it any surprise that after a year, the establishment media is still feeding people this kind of fear? There are those with power and influence in this country who are motivated by much more than the betterment of public health. When was the last time you felt like a media activist with a liberal arts degree had your best interests in mind?

Kluth sounds as certain of his dire forecast as those behind the flawed Imperial College model, which dictated policy last year in this country — leading to depraved lockdowns and an increase in suicide deaths and addictions.

Enough of gloomy media Op-Eds and assumptions from the private medical community and its endless conflicts of interest. It’s time to open up this country and defy the handling of the pandemic by so-called professionals and our elected officials.

The wearing of masks, the usage of social distancing and other virus mitigation measures must be — and should have always been — voluntary. The more we allow those who view themselves as the gatekeepers of our liberties to go on unchecked, the longer this nonsense will all drag out.

Should public health mandates continue any longer, or grow more draconian in nature, the only answer is mass civil disobedience. The pandemic, even if deadly, was also always an opportunity for opportunists to grab power and upend life. We must deny these people opportunity.

These new variants might very well pose a threat to each of us. But the emergence of each new mutation coincides with an opportunity to reset the COVID clock for people exercising power.

We most certainly can no longer lend an ear to the hopeless and fear-mongering rhetoric being pushed by the establishment media.

The coronavirus pandemic, at this stage, is over for each individual American when they decide it is — be that through inoculation, immunity obtained through infection or through a refusal to live in fear.

Those among us who feel vulnerable should take measures to protect themselves, should they decide that such measures are in their best interests.