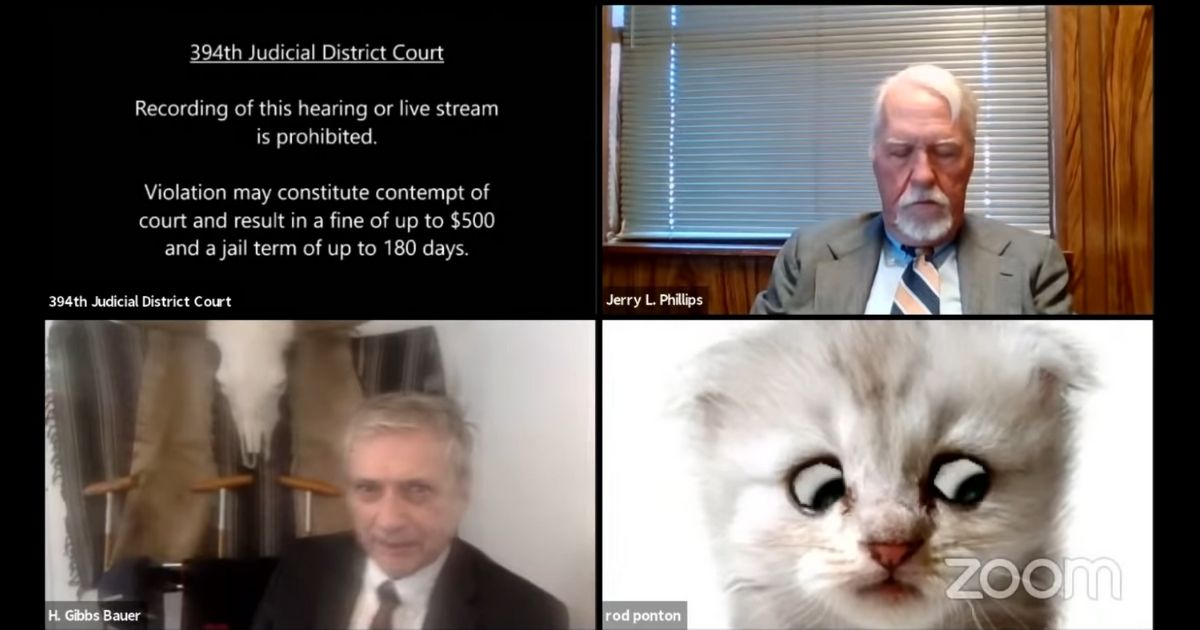 Video conferencing has been indispensable as more people have started working from home. There’s definitely a learning curve, and most people have had issues of some sort as they learned the ropes.

For some, that’s included giving people a glimpse of questionable goings-on in the backgrounds. For many, it’s been issues with muting (or not muting, as the case may be).

For lawyer Rod Ponton from Texas, it was a filter that caused him grief and gained him internet fame.

The trouble started when Ponton needed to borrow his secretary’s laptop to join a virtual court hearing. His secretary happens to have a young daughter.

The lawyer didn’t realize he’d show up to the group as a cute little kitten with a mouth and eyes that moved when his did, but it was immediately noticed by Judge Roy Ferguson, who later shared the video of the hilarious debacle.

“Mr. Ponton I believe you have a filter turned on in the video settings,” Ferguson says in the video. “You might want to, ah …”

“Can you hear me, judge?” Ponton replies, the anxiety in his voice palpable.

“IMPORTANT ZOOM TIP: If a child used your computer, before you join a virtual hearing check the Zoom Video Options to be sure filters are off,” Judge Roy Ferguson tweeted on Tuesday. “This kitten just made a formal announcement on a case in the 394th (sound on).”

IMPORTANT ZOOM TIP: If a child used your computer, before you join a virtual hearing check the Zoom Video Options to be sure filters are off. This kitten just made a formal announcement on a case in the 394th (sound on). #lawtwitter #OhNo @zoom_ushttps://t.co/I0zaj0wu6K

Ponton told TODAY that despite the hiccup, he was prepared to proceed, even if it had to be as a kitten.

He was a good sport about the whole thing, saying that after the video went viral his phone started “blowing up” and he didn’t know why — at first he thought maybe he’d gotten into trouble.

“It can happen to anybody,” he said, “but yesterday it dang sure happened to me.”

“If I can make the country chuckle for a moment in these difficult times they’re going through, I’m happy to let them do that at my expense,” Ponton added in a comment to The New York Times.

“These fun moments are a by-product of the legal profession’s dedication to ensuring that the justice system continues to function in these tough times,” Ferguson said in another tweet on Tuesday.

“Everyone involved handled it with dignity, and the filtered lawyer showed incredible grace. True professionalism all around!”