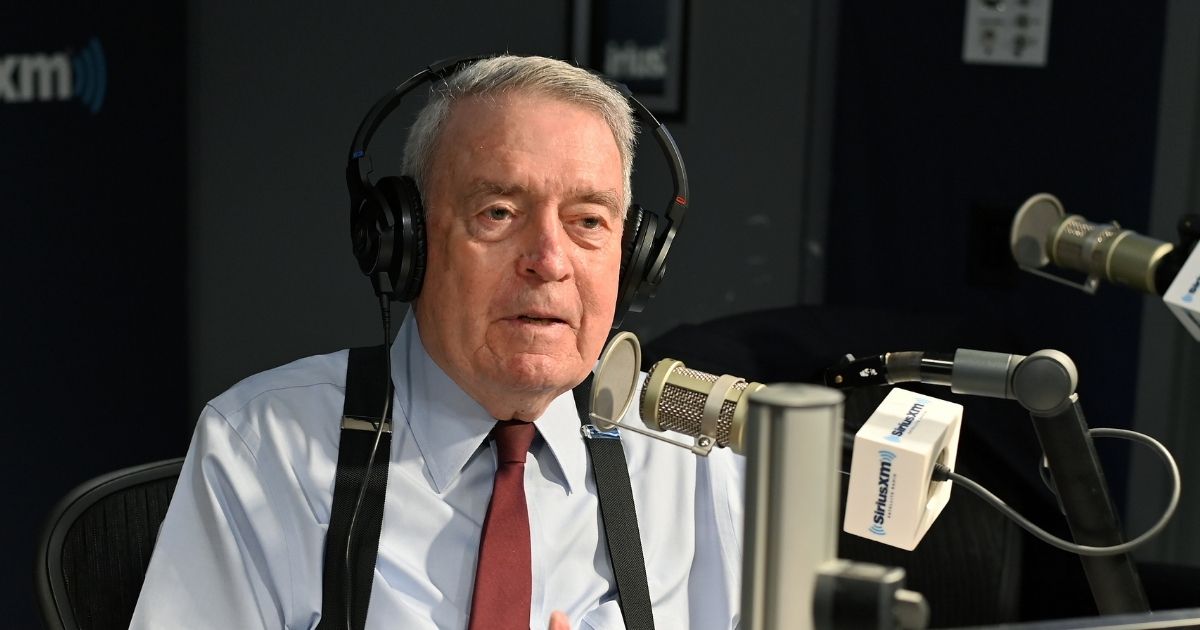 For “journalists” like Dan Rather, objectivity is like the skin of a snake that’s long since been shed.

No matter how short your memory is, you can probably attest to the last part if you ever venture onto Facebook and have a liberal friend or two. Rather apparently now occupies his time with “how dare you, sir?”-style fulminations at conservatives, usually President Donald Trump. This kind of stilted Keith Olbermann-circa-2006 ranting gets passed around ad nauseam by the kind of liberal who’s posted the “America is not the greatest country in the world” clip from Aaron Sorkin’s “The Newsroom” a few too many times.

When he’s not busy posting 1,500-word screeds or shilling for his book or his SiriusXM show, “Dan Rather’s America,” Rather is  posting sub-dad jokes like this: “Why is the Trump White House suddenly a very polite place to work? Everyone’s going around saying ‘pardon me.’”

It’s almost enough to make one pine for the days when he’d be anchoring the CBS News desk, spinning pseudo-folskyisms like saying a candidate “had as much business in this race as a moose in a phone booth” and calling a Senate race as “hot and tight as a too small bathing suit on a too long car ride back from the beach.”

As for why Rather isn’t anchoring the CBS News desk — aside from his senescence, the longtime newsman was forced out of the network after a 2004 “scoop” that then-President George W. Bush had been AWOL during most of his time in the Texas Air National Guard turned out to be based on forged documents that anyone with an internet connection and a few hours to kill could have debunked.

Rather was forced to step down as anchor for “CBS Evening News” in the aftermath of the report and eventually fired by the network in 2006. (A breach-of-contract suit Rather brought against CBS was dismissed in 2009, as the Los Angeles Times reported.)

Despite that history, Rather stands by the report. To use Rather’s own parlance, in 2020, that holds about as much water as a rusty bucket that’s been left out behind the barn since two harvests ago and now has a swarm of ants crawling through the bottom.

There is, in short, no better man to represent what “courage” entails in the 2020 world of journalism than Dan Rather. That’s not in spite of the fact that no one can call him a respected arbiter of the facts who pretends to objectivity, but rather because of it.

So who better for the Moody College of Communication at the University of Texas at Austin to honor with not one but two awards?

Is this a sign that real journalism is dead?

“The Dan Rather Medals for News and Guts honor the process of journalism as much as the end product,” the college announced last week, according to a commentary piece published by the Washington Examiner last week.

“They will be awarded to professional and collegiate journalists who go the extra yard — overcoming obstacles like stonewalling and harassment — to get the story that tells truth to power.”

Each award is worth $5,000 to the recipients, according to the university’s website.

Commentary writer Becket Adams appeared skeptical this was, you know, a thing, but the school confirmed to him “that the awards are, in fact, real and that they are not part of an elaborate joke.”

“The Medals are named for Dan Rather, the legendary reporter and anchor who went far afield from his Texan roots but never forgot his humble beginnings,” a university representative told Adams.

“He has been an ardent supporter of the School of Journalism and Media, inspiring and advocating for our majors. He is a permanent member of the Moody College of Communication’s Advisory Council, where he has been instrumental in its extraordinary development.”

One suspects that “ardent supporter” part has plenty to do with why the awards are named after one of the 21st century’s most infamous purveyor of fake news — but, as Adams points out, it dovetails nicely with where mainstream journalism is in the year of our Lord, 2020.

“Look, this isn’t to keep harping on the disgraced newsman and his attempt 16 years ago to influence a presidential election with honest-to-God fake news. Rather (ha!), this is to underscore a deeper rot in the news industry and its feeder schools,” Adams wrote.

“Rather’s steady rehabilitation despite his lack of remorse for what he did during the 2004 presidential election is indicative of a much deeper problem in media. It is just another data point showing the press’s standards, or whatever we’re calling them these days, depend mostly on the person to whom they are being applied.

“Rather should be a pariah in media, especially because he still maintains he did nothing wrong (he did). But he has enjoyed a renaissance in the news business these past couple of years, thanks, in large part, to his anti-President Trump social media activities.”

Adams is partially right, but he misses the fact the Rather rehabilitation project had been ongoing since before the Trump years.

Take one sample review from Candice Frederick at Reel Talk Online that barely talks about the quality of the movie, but notes that the Bush story was purportedly debunked because “the documents used to help prove the story that apparently had questionable typographical symbols that didn’t exist in the 60s. Typographical symbols, people.”

“Yet still to this day no one has been able to disprove the story about Bush. And it seems no one even cared to conduct that investigation. Because it was more important to scrutinize and sell papers with stories about typographical symbols.”

That’s right: “Truth” left the impression Dan Rather was the real martyr because Bush hadn’t disproved a story that was based on debunked documents. Oh, yeah, the picture itself: “Is it a great film? No, but it definitely deserves to be talked about,” Frederick said in about the only line in the review that dealt with whether or not “Truth” was a well-made movie.

Neither the movie nor the vast majority of the publicity that accompanied it took note of the fact that Rather’s fall from grace wasn’t just about typographical symbols, people.

As Dorothy Rabinowitz pointed out in a commentary The Wall Street Journal, Rather and his producer, Mary Mapes — who had been trying to prove for five years at that point, fruitlessly, that Bush had received preferential treatment to avoid being deployed to Vietnam — ignored numerous red flags that contradicted their narrative and committed major ethical lapses to get the forged documents in the first place.

“It is a view evident in every aspect of ‘Truth,’ in every sonorous speech about how freedom of inquiry and democracy itself were the real victims of the firings and resignations that ensued once the scandal broke. These recitals come with stupefying regularity, as do certain golden moments — not for the fainthearted — in which the characters of Ms. Mapes and Dan Rather profess their mutual love and trust in one another in their struggle for justice,” she wrote.

“Despite its glamorization, this saga of a news investigation built on fabrications presented as important truth — truth that would have been accepted as such if only corrupt corporate types and conservative propagandists had not picked away at irrelevances like those lies — isn’t likely to persuade anyone with any knowledge of this history.”

But that’s where Rabinowitz got it wrong — although it’s not her fault. She couldn’t have predicted that five years hence, knowledge of history would be irrelevant, and Dan Rather would be the avatar of what the mainstream media views as the journalism of the future: Taking down conservative figures at any cost.

Bravo, University of Texas. You hit the nail on the head.