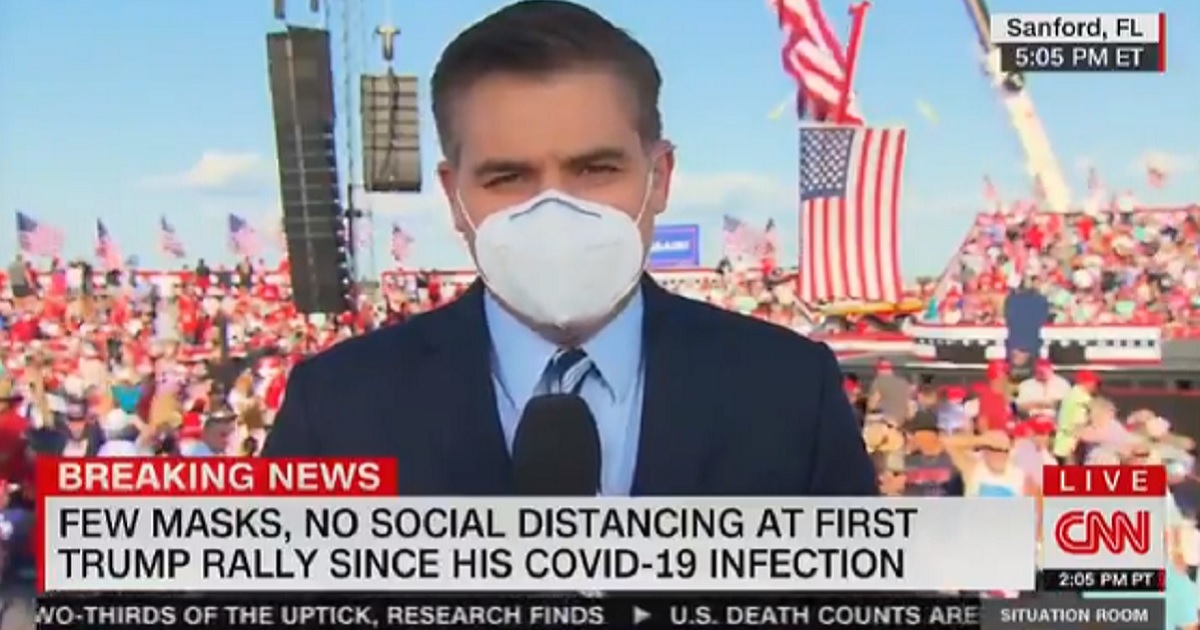 CNN’s Jim Acosta is supposed to be a professional journalist, and that’s what makes his botched comeback — where he accidentally agreed with his critics — so gloriously satisfying.

Now, don’t get tripped up on the word “professional” because you’ve watched him heckle and hector White House press secretary Kayleigh McEnany with stupid questions one too many times.

Acosta may be in the habit of engaging in self-aggrandizing confrontations rather than actual journalism, but he is the network’s chief White House correspondent and should have known better.

In a live report from the President Donald Trump’s campaign rally in Sanford, Florida, on Monday, a masked Acosta was prattling on about how dire the president’s re-election prospects are, even while a massive crowd was gathered behind him in anticipation of Trump’s arrival.

Is the establishment media too far gone to care about their own bias anymore?

“But Iowa and North Carolina are really states that should be in the bag for President Trump right now,” Acosta told “The Situation Room” host Wolf Blitzer.

“That’s an indication as to how much trouble he’s in politically right now, Wolf,” Acosta said straight-faced in front of the large, enthusiastic crowd. (He seemed to be serious, but it’s hard to tell from behind the huge, clunky mask strapped to his face — can’t this network get sleeker masks?)

As the din of the crowd grew with increasing chants of “CNN sucks,” Acosta tried to think on his feet and get cute, but deliciously failed right into a telling admission.

“And as this crowd is chanting that there are members of the press here who suck, I should also point out, Wolf —  what also sucks? Getting the coronavirus,” Acosta said Monday.

Members of the crowd at President Trump’s rally in Florida chant “CNN sucks” as @Acosta is live on air
pic.twitter.com/fdXTrt8MaG

So if the virus “also” sucks, then the crowd was right about CNN? No argument here.

The president’s son, Donald Trump, Jr., ran with Acosta’s assessment and tweeted the clip with the caption, “Fact check: True.”

RELATED: Biden’s Whopper on Amy Coney Barrett Couldn’t Even Get Past a CNN Fact Check

Acosta might have had more luck with the “I’m rubber, you’re glue…” defense instead, but he apparently thought coronavirus was the kill shot because the left sees the pandemic as Trump’s political Achilles heel.

To that end, Acosta tweeted photos to shame all of the naked faces he spied at the rally, and more than one Twitter user replied with a photo of a mask-less Acosta in the thick of the crowd.

Is this you with no mask? pic.twitter.com/avbpPATx6n

By now, the jig is up and everyone has caught on to CNN and its ilk for their left-wing bias, which is why those chants have been a regular feature at Trump events for years.

The left is nervous because Trump’s supporters continue to come out by the thousands for their candidate while his 2020 presidential challenger, former Vice President Joe Biden, counts his attendees by the dozen (if even that many).

Despite Acosta’s finger-wagging and sniping at the crowd, the rally Monday — Trump’s first since his own coronavirus diagnoses — was a success to the people who really matter: His supporters.

“I feel so powerful,” Trump told the crowd, according to the Orlando Sentinel, joking about his rebound from the virus.

If nothing else, it turns out Acosta’s comment was actually a good thing for CNN.

You see, for all the fake news Acosta and his network churn out on a daily basis, they finally covered one story accurately: Coronavirus sucks, and so does CNN.

Teacher Holds Student After Class, Lectures Him After He Picks Trump as His Hero