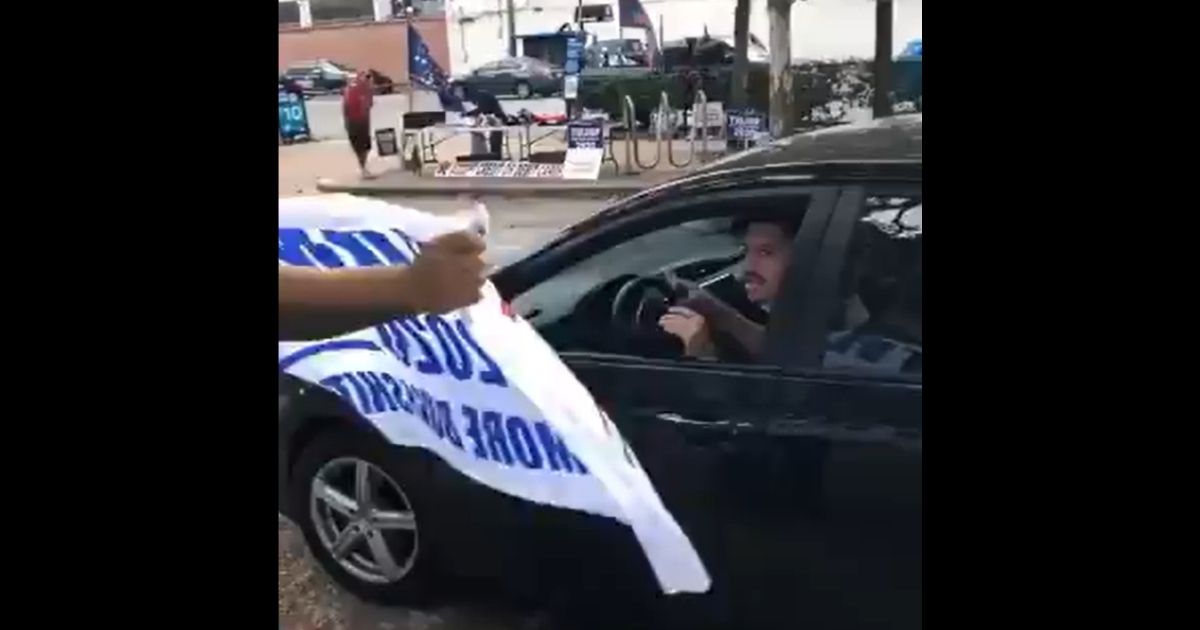 A video that has gone viral on social media shows a man apparently spitting at and then attempting to steal a flag from a supporter of President Donald Trump just before things went horribly wrong for him.

The man seemed to want to make off with a memento through his car window following a tense verbal exchange about the election, but he likely regretted the attempted Trump flag theft as he crashed his vehicle just seconds later in a humiliating fashion.

The short clip begins with a heated exchange between the Trump supporter and the man behind the wheel, who apparently backs Democratic presidential hopeful Joe Biden.

“He lost, he lost,” the Trump supporter said to the man — an apparent reference to Biden as the still-contested presidential election has seen Trump supporters hit the streets in droves to protest the results.

The Biden supporter, from his car, can be heard on video saying, “No, he didn’t.”

The Trump supporter responded, “He lost, he lost. Stupid a–hole.”

The man in the car then seemed to spit at the flag and attempt to grab it from the Trump supporter.

After failing to secure it, the driver tried to speed off.

However, he crashed into a streetlight a few feet away.

WARNING: The following video contains vulgar language that some might find offensive.

“That’s what you get! All that hate!” someone off-camera said to the driver.

Seconds later, a police cruiser pulled up behind the car.

As the man exited the vehicle, one observer said, “He spit on the guy.”

The officers then approached the man and talked to him while the Trump supporters enjoyed the show.

The Sun reported the video is believed to have been captured during a pro-Trump rally in Houston over the weekend.

Regardless of the location, the clip is good for a quick laugh.

Some described the man’s vehicle mishap as a case of instant karma. If you don’t subscribe to the Eastern philosophy of karma, though, you could call it instant justice.

The humiliating post-attempted theft crash came as Trump supporters were being physically assaulted in Washington, D.C., after a massive gathering to protest the projected election results as the president’s legal team mounts court challenges alleging voter fraud and irregularities in swing states.

Videos of those attacks are pretty disturbing.

DC Police blocked off BLM again so Trump supporters couldn’t get through and were made to go through BLM group which then attacked them. #MillionMAGAMarch pic.twitter.com/tS7YTEe51X

Young couple in DC followed by crowd of BLM-antifa thugs who hit them and throw liquid on them. #MillionMAGAMarch pic.twitter.com/Lqo4evvviK

Ironically, the car crash and the attacks on Trump supporters in the nation’s capital came after Democrats and the establishment media claimed a Biden administration would restore “unity” to a divided country.

Conservatives who have been attacked, threatened and even put on creepy lists by Democrats such as Rep. Alexandria Ocasio-Cortez of New York are still waiting for that unity.