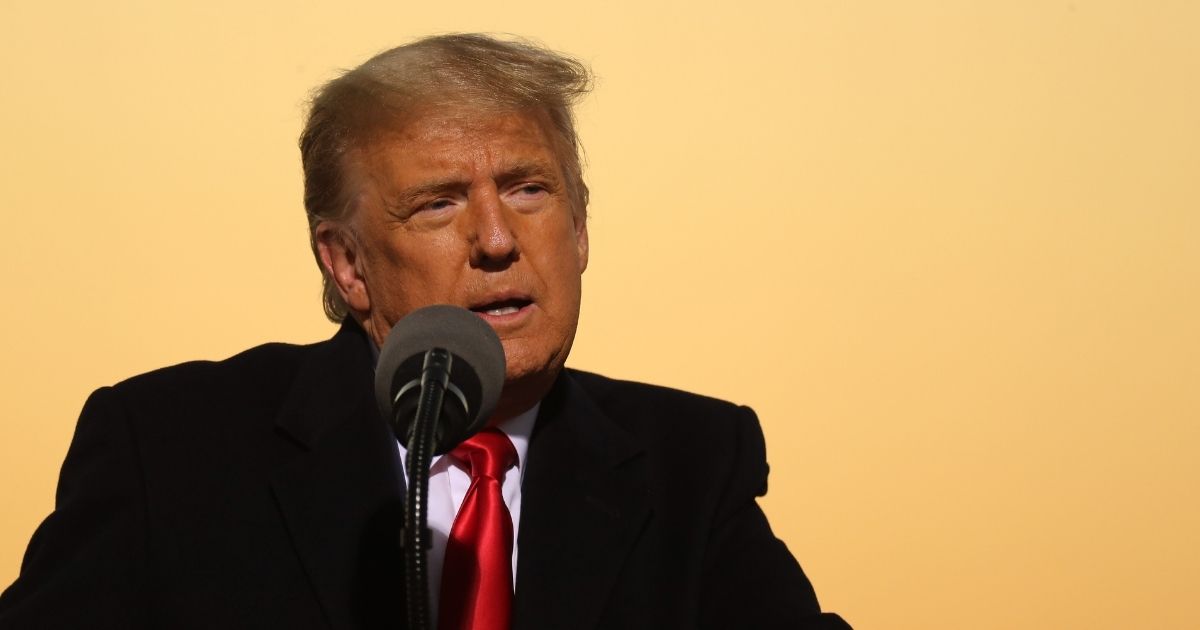 Rudy Giuliani said over the weekend that Trump’s legal team is shifting its efforts to confront alleged voter fraud by focusing on irregularities seen in the Dominion Voting Systems machines.

Certainly with what’s already been uncovered in Michigan and Georgia related to the use of these machines, that would seem a fertile field.

“We met pretty much on and off all day yesterday, and starting this morning, there’s a completely different strategy,” Giuliani said on Steve Bannon’s “War Room” podcast on Saturday, the Washington Examiner reported.

“The strategy is going to focus a great deal on some evidence we have about some of these machines that could throw off these states in a matter of maybe a one- or two-day audit,” he added.

A Giuliani tweet on Monday referenced a 68.05 percent error rate found by election cyber expert Russell Ramsland and his team’s audit of Antrim County, Michigan, which flipped from a win for Democrat Joe Biden to President Donald Trump after the faulty result was discovered and corrected.

That error rate generated by the Dominion Voting Systems machines was at least 85,000 times higher than the Federal Election Commission guidelines allow.

“PA, AZ, GA, MI, and WI should agree to let us audit the Dominion machines. If they didn’t cheat, what are they afraid of? We MUST have an audit!” Giuliani tweeted.

PA, AZ, GA, MI, and WI should agree to let us audit the Dominion machines. If they didn’t cheat, what are they afraid of? We MUST have an audit!

In a video linked in the tweet, the former New York City mayor noted that up to this point his legal team’s efforts have been primarily directed at issues related to absentee ballots and unilateral changes to election laws made by state officials and judges.

The attorneys also gathered and presented eyewitness reports to state legislators of suspicious vote counting activities in places like Philadelphia, Detroit and Atlanta at a level that could seemingly effect enough votes to flip jurisdictions from Trump to Biden.

Giuliani acknowledged that so far, courts have been unwilling to provide hearings for these witnesses — who have come forward and provided testimonies and affidavits under penalty of perjury — to be heard.

“It’s very strange,” he said. “It’s almost as if, ‘See no evil, hear no evil. We want to stay out of it,’ even though the evidence is mounting.”

Giuliani then explained his team’s shift to looking into the voting machines themselves.

“I want to focus on something you’re probably heard about, but probably we haven’t had as much time to study: the Dominion voting system,” he said.

“The Dominion voting system is a voting system that was used in approximately 27 states and in the critical battleground states, where rather incredibly large Trump leads were eviscerated overnight by questionable ballot counts from the Biden side that were done secretly and without inspection,” Giuliani alleged.

The attorney pointed out that these machines were used in Michigan, Philadelphia, Milwaukee, Atlanta and Maricopa County, Arizona (which includes the Phoenix metro area).

Trump was ahead by large margins in Michigan, Pennsylvania and Georgia on election night, but all three swung in Biden’s direction particularly as more vote totals came in from Detroit, Philadelphia and Atlanta.

Giuliani accused Republican Govs. Brian Kemp of Georgia and Doug Ducey of Arizona of covering up election irregularities but expressed optimism his team will be able to press through and gain access to audit the Dominion machines.

“I think we can get these accomplished despite the resistance and the cover-up of the Republican governors, the guy in Arizona and the guy in Georgia — if we had their cooperation, we could have it ended by Monday,” Giuliani told Bannon, who was Trump’s 2016 campaign CEO.

“I’m tired of dealing with them. We just push them aside, and I think over the weekend, you’ll see different strategies being employed,” he added.

Ramsland’s audit team found that a “staggering number” of votes were digitally adjudicated in 2020 in Antrim County.

Ballots sent to adjudication can be altered by administrators, as was demonstrated by an election worker in Georgia earlier this month.

1/ Wondering how Dominion software might create the opportunity for fraud! Coffee Co., Ga Board of Elections shows how. Watch and learn.

On Friday, Ramsland told Newsmax, “I think that there is going to be some information [coming] forth in the next few days that is going to drastically change the playing field.”

He added that there is “tons of evidence” of voting irregularities.

…but thinks “that there is going to be some information coming forth in the next few days that is going to drastically change the playing field.” pic.twitter.com/G9LOzwkiqu

Sixty-five Michigan counties use Dominion Voting Systems, according to WLNS-TV in Lansing.

On Monday, Arizona GOP Chairwoman Kelli Ward announced that she and her fellow alternate Trump “electors” (the state’s official electors voted for Biden) will be joining a suit seeking to force Maricopa County to comply with Arizona Senate subpoenas to audit Dominion Voting Systems.

Maricopa County attorneys are asking a judge to “quash” legislative subpoenas for a forensic audit of Dominion machines! That can only mean one thing—we’re over the target, patriots. #HoldTheLine

The Arizona Republican Party tweeted last week, “Maricopa County attorneys are asking a judge to ‘quash’ legislative subpoenas for a forensic audit of Dominion machines! That can only mean one thing — we’re over the target, patriots. #HoldTheLine.”

Buckle up! These next few weeks could get very interesting!