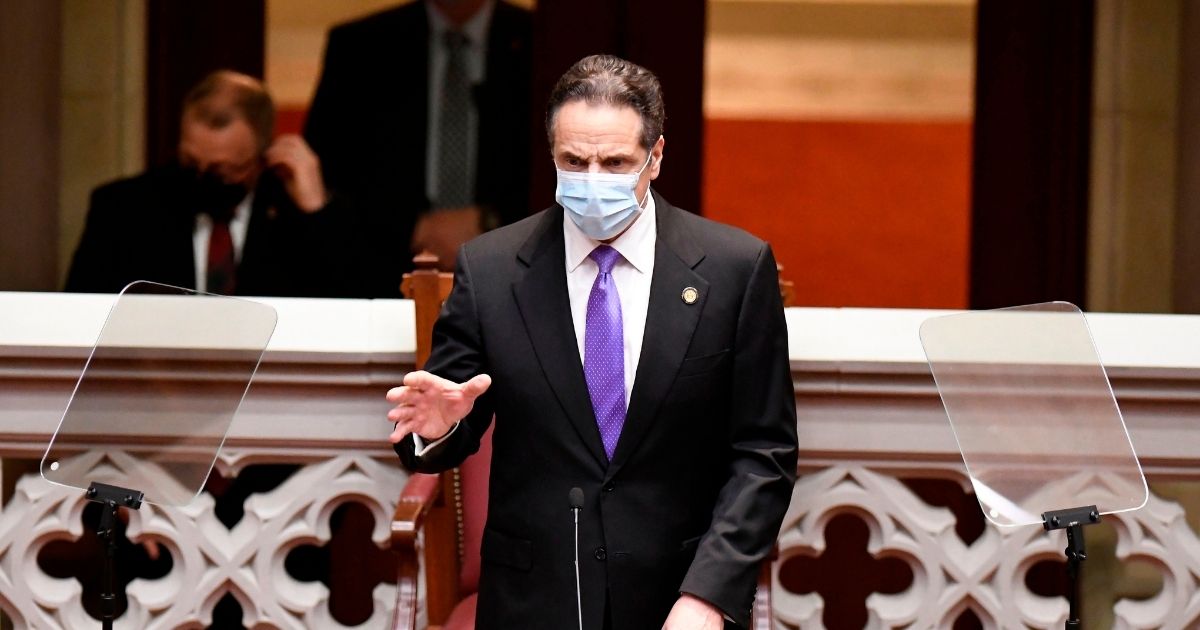 New York Gov. Andrew Cuomo, under attack over allegations that his COVID-19 policy directly led to nursing home deaths his administration has been accused of covering up, is nearing the end of his political road, former Arkansas Republican Gov. Mike Huckabee said Friday.

“You know you’re in trouble when you’re Andrew Cuomo, a Democrat governor of New York, and you got AOC [Democratic Rep. Alexandria Ocasio-Cortez] and Alec Baldwin and members of your own party who smell the blood in the water and they’re coming after him,” said Huckabee, according to Fox News.

Baldwin took to Twitter to say that “if Cuomo threatened Ron Kim’s career, Cuomo should resign.”

Kim is a Democratic Queens Assemblyman who said Cuomo vowed to “destroy” him after Kim criticized the Cuomo administration for not sharing the full toll of nursing home residents who died from COVID-19. Cuomo last March ordered nursing homes to take in COVID-19 patients, which has been linked to the disease increasing deaths in those facilities. Kim lost an uncle to the pandemic.

Ocasio-Cortez on Friday said she was joining with “our local officials calling for a full investigation of the Cuomo administration’s handling of nursing homes during COVID-19,” according to the New York Post.

Noting that “thousands of vulnerable New Yorkers lost their lives,” Ocasio-Cortez said, “Their loved ones and the public deserve answers and transparency from their elected leadership,” according to The New York Times, which noted the statement was released at the same time as a media briefing by the governor.

As the sharks circled, Huckabee said Cuomo is reaping what he has sown.

“His bullying has finally caught up with him and people are no longer pretending they’re afraid of him, and they’re speaking out,” Huckabee said, according to Fox News. “I think his time is limited. He may finish his term, but I think this is the last thing he’ll do politically.”

During a discussion of Cuomo’s plight on the Fox News show “Hannity,” Fox News contributor Charles Hurt said the media is part of the problem.

“I still say, from 30,000 feet up, the far worst crime is the cover-up by the media,” Hurt said. “The degree to which the media is treating him like some kind of hero, treated him like some kind of hero from the beginning … We’re talking about thousands of people who died because of a directive he issued forcing COVID patients — highly-transmissible, infectious COVID patients — into nursing homes, into rooms with our most vulnerable people in the country.”

Republican Rep. Lee Zeldin of New York said in the wake of the outrage that exploded when a Cuomo aide admitted to Democrats that the administration intentionally withheld data on nursing home deaths, Cuomo is likely to be stripped of his emergency powers, which expire April 30.

“The Republicans in the New York State Assembly are pushing for impeachment … It seems like there might be some Democratic support for that, we’ll see where that goes,” he said, according to Fox News. “There are a lot of different components here as to why Governor Cuomo needs to go … I’m a proud New Yorker. If we want to save our state, Cuomo’s got to go.”

Zeldin said Cuomo’s tactics are “to bully” and to “be filled with revenge and spite and backstabbing.” Huckabee added to that.

Earlier Friday, Cuomo attacked what he called “misinformation” about the deaths of more than 13,000 New Yorkers confined to nursing homes due to COVID-19.

“I’m not going to let you hurt New Yorkers by lying about what happened. Surrounding the death of a loved one,” Cuomo said, according to the Post.  “So, I’m going to take on the lies and the unscrupulous actors, especially when they cause pain and damage to New York.”

Cuomo denied his March 2020 memo hiked the death toll or that there was a coverup of the numbers.

He also said death is simply part of life in a nursing home.

“If anyone had the perfect answer to nursing home deaths, and if anyone tells you they do, they’re lying,” he said, according to The Times. “Because people are going to die in nursing homes.”