Home Daily News High School Student Says She Was Kicked Out of Zoom Class for... 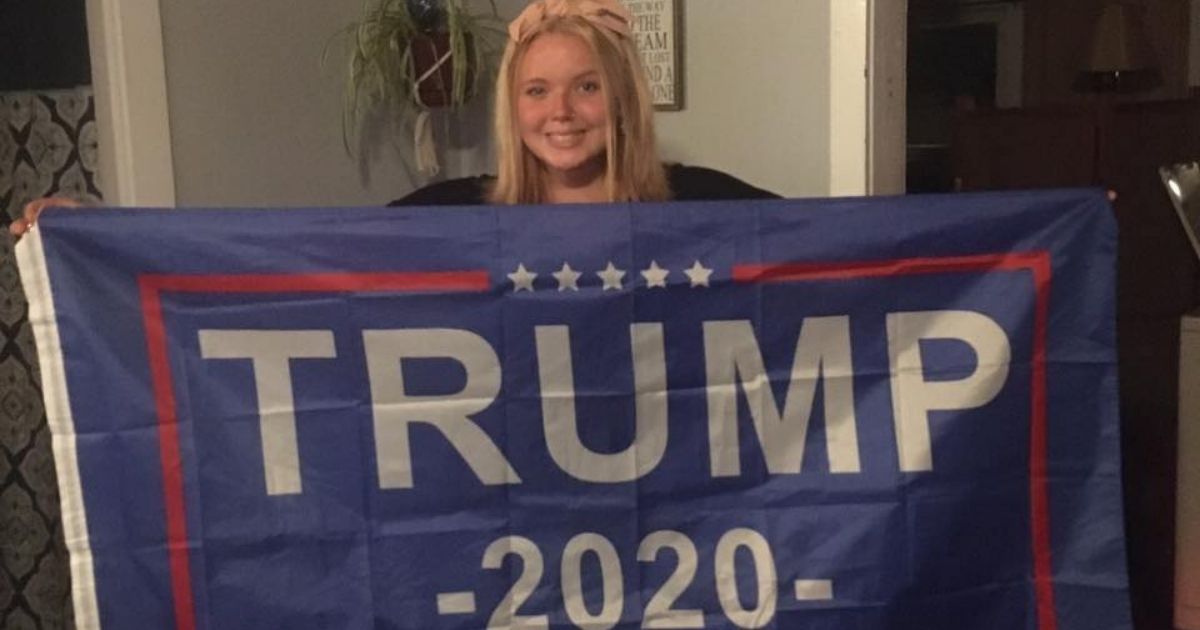 A second student in as many weeks was removed from a remote learning session after displaying a flag in support of President Donald Trump from home amid the coronavirus pandemic.

2020 sure has been a weird year, but if the above sentence doesn’t perfectly encapsulate how quickly things can spiral downward in a free society, then few other words can suffice.

A high school junior named Mollie Woodbury at Massabesic High School in Waterboro, Maine, said she was minding her own business in her own bedroom on Thursday, WKYC-TV reported.

Woodbury apparently supports the president, so she had a flag on her wall that read “TRUMP 2020” and contained one of the president’s campaign slogans, “Keep America Great,” at the bottom.

In a sane world, the teen girl might have been lauded for exercising her First Amendment rights and for apparently brushing up on the issues and being engaged.

If Woodbury were a burgeoning liberal, we can assume she would be celebrated.

But Trump is literally Hitler and conservatism is an archaic worldview built on hatred, as far as many of the country’s leftist educators are concerned.

That being said, the teen’s Trump flag was a problem.

Woodbury told WKYC her math teacher demanded she remove the flag, and she responded by informing the instructor that she would not remove the non-offensive flag from her own bedroom.

The teacher must have become incredibly more triggered, because Woodbury was met on her computer screen with a notification informing her that the indignant teacher had booted her from the class Zoom meeting.

Woodbury described her shock, saying the flag had been there for a week and had not been an issue.

“It’s never really been an issue, nothing has ever been said about it until the other day,” she told WKYC.

The teen was in virtual class the next day, but was cold-shouldered by the math teacher, who she said refused to acknowledge her.

“I kinda feel like my right to have my own opinion was taken away by her,” Woodbury said.

The girl’s mom, Amanda Morrison, also commented to the station about the political dustup.

“She’s losing her right to learn, it was just uncalled for,” Morrison said.

“I love that she’s intrigued in politics because that’s not something that everybody gets into.”

Do you think schools have a problem with leftist indoctrination of students?

The school district issued a bland and carefully curated statement defending the censorship of a teen:

“[Regional School Unit 57] supports the rights of both students and staff to express their views on matters of public concern. There are; however, times when the District must make content neutral time, place and manner restrictions on speech to ensure the orderly operation of its schools and the educational process,” the statement read.

“Whereas educators are pretty familiar with what is and is not appropriate in the traditional classroom, we are all still learning the rules in a virtual environment. In this case, staff acted to ensure that permission of such display and others would be appropriate in the online setting. This situation has been discussed and resolved at the local level.”

Sadly, Woodbury is learning at a young age that dissent from the leftist worldview of educators is not tolerated.

A teen in Northern California learned the same lesson last week when he was kicked out of virtual class in Colusa County.

The young man’s mother explained that a teacher became triggered after seeing a Trump flag on her son’s bedroom wall.

He was given to the count of 15 to remove the flag or be removed from class.

“You can sit up, remove the flag or reposition your camera within the next 15 seconds or I’m kicking you out of class,” the teacher told the young man.

The teen hilariously canceled the teacher by leaving the Zoom meeting before she could make good on the threat.

Both cases, though, are incredibly tragic.

Young people have taken an interest in public affairs and are sharing their beliefs.

But those aren’t the correct beliefs, according to the educators who have failed generations of American kids.

Children are being shut down by leftist adult teachers, as the left’s cancel culture is now spreading online and attempting to silence the country’s future from free political expression.