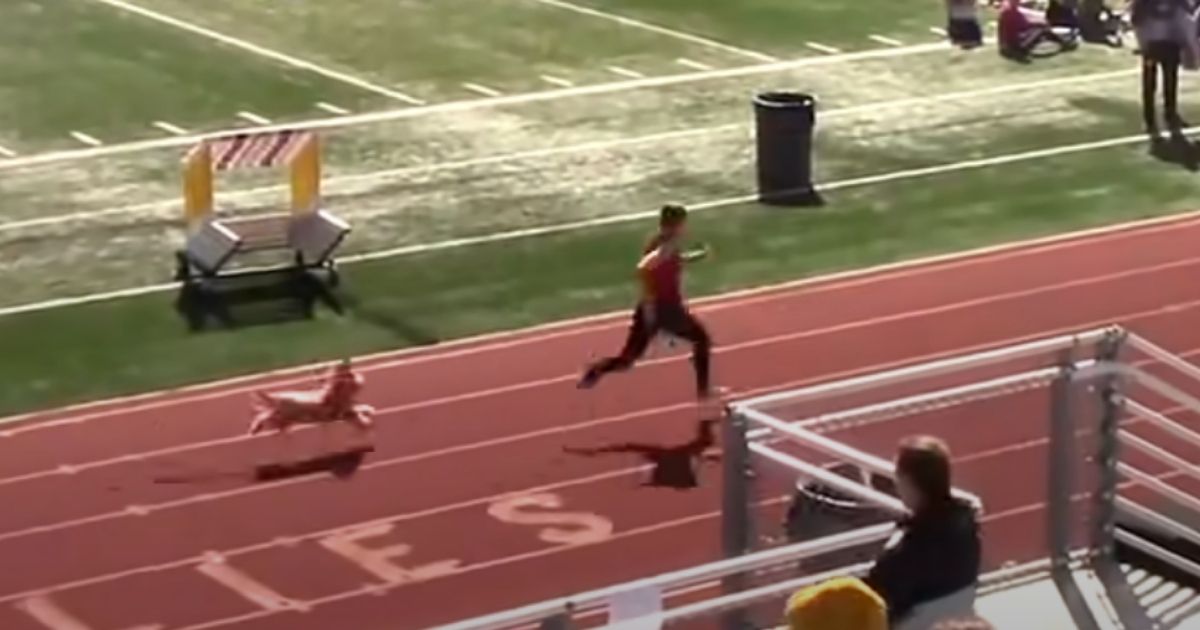 Earlier this month in Utah, Logan High School hosted the 2021 Grizzly Invitational. At that event, a contestant who hadn’t officially entered tore onto the track mid-relay race and caught up to the leader with ease.

The runner’s name was Holly, and according to The Sacramento Bee, her adjusted time was just a second shy of Usain Bolt’s 2009 record-breaking run.

It was during the 4×200 meter relay race that Logan senior Gracie Laney pulled far ahead of the competition and it looked as if no one would be able to catch up in that final stretch.

But as the teams rounded the final turn, a blonde fluffball materialized on the track, having darted away from the parents of another contestant who’d been holding her.

Laney knew something was happening, but it all happened so quickly and she had to focus so she didn’t know that it was a dog gaining on her.

The crowd roared as the pup closed in on Laney, but still, Laney didn’t know they were screaming for the dog.

“I’d say probably about the 50-meters [mark], I could feel something coming on me, and I thought it was a person,” Laney later said, according to The Salt Lake Tribune. “I thought it was the runner.”

“And then I kind of realized that it was really small.”

While Laney told The Tribune that she noticed the cheering “sounded different” than usual, it wasn’t until Holly passed her up that she realized what had happened.

And then, in an underhanded move, the pooch danced across Laney’s lane. It was all the runner could do to avoid stepping on the dog.

Later, when she saw the footage, even Laney was impressed with Holly’s speed.

“After watching the video, I thought, ‘Holy cow, that dog is so fast,'” she told The Tribune. “So I thought it was kind of funny [that] I got beat by a dog.”

As it turned out, Holly was another contestant’s dog. Kate Heywood, a junior runner for Murray High Schools, was warming up while her parents watched Holly, according to The Bee.

Somehow Holly gave them the slip and made her debut. While she didn’t warm up, she had been training — Heywood said sometimes Holly runs with her, though she said the dog tends to burn out at around five miles.

Thankfully no one was injured, the race was pretty much already settled and Laney was a good sport about the whole thing.

“Looking back, I really wish I had gotten a selfie or something with it,” she said.