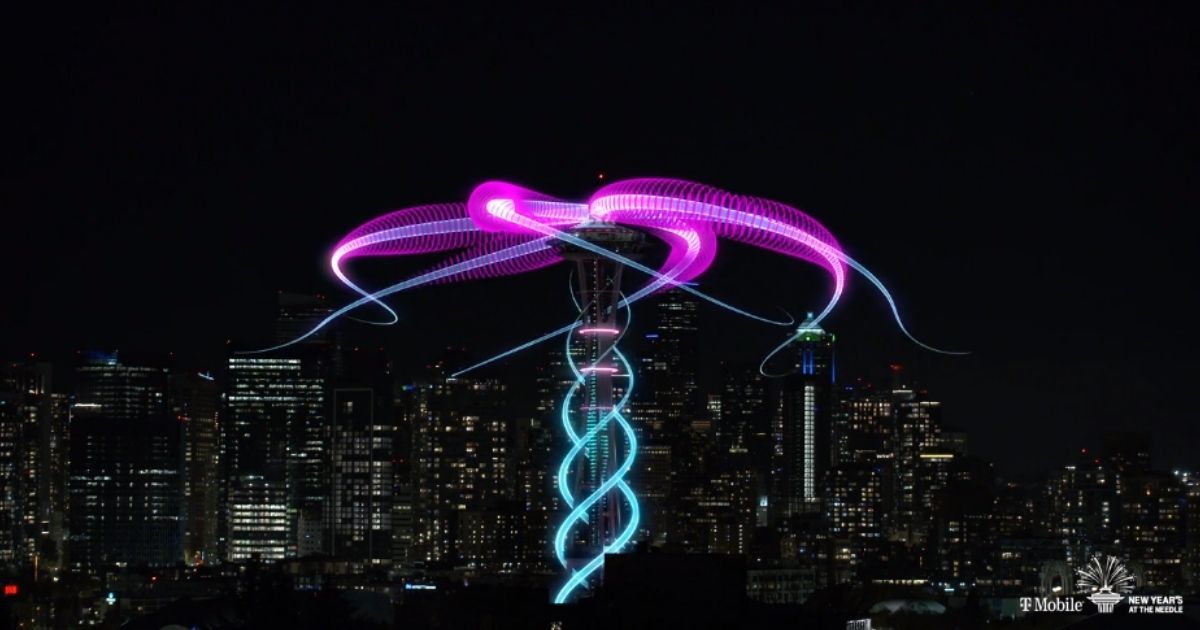 As people around the country gathered to bid farewell to the confusing and chaotic year of 2020, revelers celebrated in a changed nation.

In New York City’s Times Square, police kept the public out of the iconic crossroads as Mayor Bill de Blasio danced the night away with his wife under the city lights. In California, residents were simply told to stay home over fear of COVID-19 transmission.

And in Seattle, Washington, the regular fireworks at the towering Space Needle were abandoned in favor of a spectacular light show.

The impressive and otherworldly show features beams of light, gigantic flying jellyfish and floating heads glowing in the night.

Of course, none of this could be seen if you watched the actual space needle itself as the final seconds of 2020 ticked away.

“This year’s celebration featured striking visuals in a wondrous display of digital effects, engineered to bring viewers bigger thrills than ever before,” the landmark’s website explains, “all safely from the comfort of home.

“Using sky-mapping technology and real video footage, the Space Needle was layered with immersive, digital artistic expressions to create an illusion of color and wonder.

“In reality,” the Space Needle’s website states, “the tower was lit in T-Mobile’s distinctive magenta color, but on the screen, viewers were dazzled by a virtual spectacular surrounding the Space Needle and the skies above.”

Would you rather see fireworks in person than a virtual light show?

In other words, it was all just pixels on a screen. Those visiting the tower hoping to see some New Year action were met with a boring tower, illuminated only with a light in the same shade as the sponsoring megacorporation’s logo.

There were no earth-shaking fireworks or throngs of revelers excitedly counting down the final moments of 2020.

While COVID-19 precautions meant that end-of-year celebrations would be anything but normal, several American cities appeared to be dystopian police states rather than population centers simply being cautious about a virus.

In New York City’s Times Square, Mayor Bill de Blasio partied with celebrities and other big names in the mostly empty crossroads as police kept residents away from the area. In California, a stay-at-home order kept many from even leaving their houses to celebrate the new year.

One year ago, who could have imagined an America where the elites dance in the streets as citizens are told to stay indoors? That fireworks would go unlit on New Year’s Eve in fear the spectacle would draw people from their homes and closer together?

RELATED: Animal Rights Activist Fools Maria Bartiromo, and the Company He Impersonated Is Not Happy with Fox

Who could have predicted that people would be urged to watch virtual pixels swirling around the Space Needle instead of gathering outside?

As U.S. Navy Admiral Ben Moreel warned in 1956, all we need to do is look to the ancient Romans to see why easy entertainment and dependence on the government is a recipe for disaster.

The dole of bread handed out by Rome and constant gladiatorial games put on by the empire kept men alive and amused, but aimless and unfulfilled.

“The evil was not in bread and circuses, per se,” Moreel wrote, “but in the willingness of the people to sell their rights as free men for full bellies and the excitement of the games which would serve to distract them from the other human hungers which bread and circuses can never appease.”

Despite the worrying New Year’s celebrations (or lack thereof), never forget that the spirit of rebellion is alive even on the overwhelmingly liberal West Coast.

In the face of a fireworks ban in 2019, Los Angeles residents defiantly lit up the sky on Independence Day with enough pyrotechnics to bring a tear to George Washington’s eye.

As 2021 looks to be the year of COVID-empowered tyrants, Americans would do well to remember our spirit of rebellion in the face of those any would seek to subdue and pacify us.