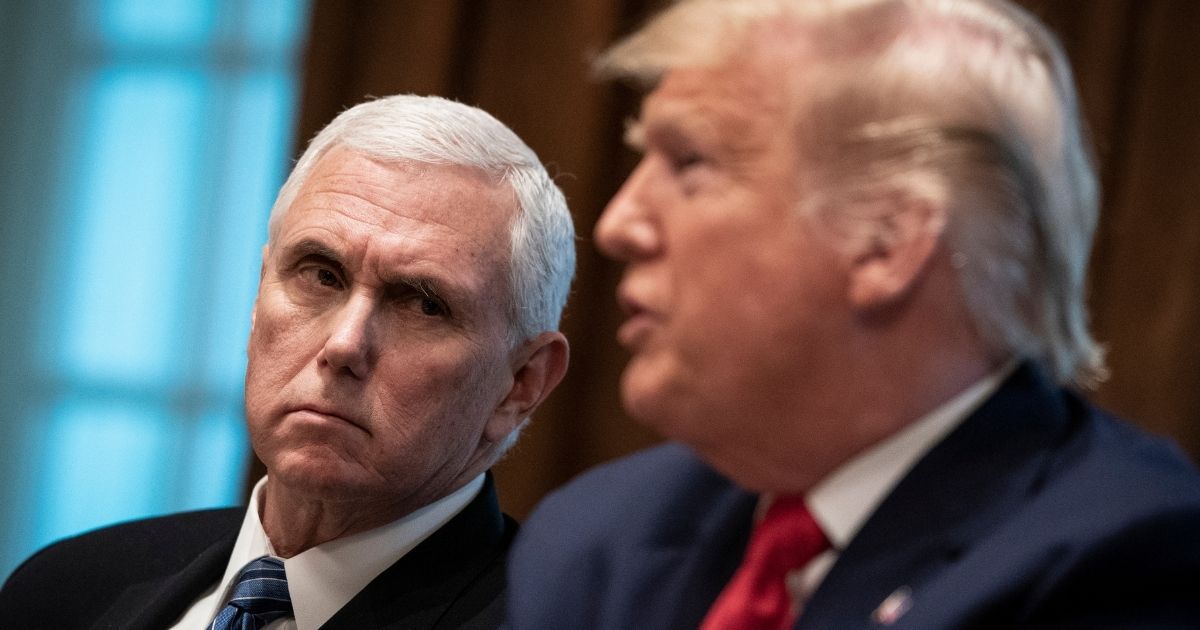 Apparently, things are pretty grim between President Donald Trump and his vice president — so grim that one senator says he’s “never seen Pence as angry as he was today.”

A report from GOP Sen. James Inhofe of Oklahoma claims that Mike Pence was furious at Trump over the president’s anger at him for refusing to reject the electoral vote certification in Congress.

The reported feud comes amid the fallout from the incursion at the U.S. Capitol on Wednesday, when pro-Trump rioters breached the Capitol, forcing Congress to halt the certification process.

According to a report from Tulsa World, Inhofe has spent more than 30 years in Congress and more than a half-century in politics.

The Oklahoma politicians said he’s never seen anything like what happened Wednesday before. And he criticized Trump’s response to the chaos.

TRENDING: Chuck Schumer Gets Roasted for Comparing Capitol Chaos to One of the Worst Days in American History

““He’s only put out one statement that I’m aware of,” Inhofe said of Trump on Wednesday night. (On Thursday, White House press secretary Kayleigh McEnany forcefully condemned the rioters during a news briefing, as did Trump himself in a recorded speech.)

“Instead, Trump directed his disdain toward Vice President Mike Pence, who refused to do what Trump wanted him to do — illegally refuse to accept the final election results in his role as Senate president,” Tulsa World reported.

Do you think Vice President Pence is right to reportedly be upset at Trump?

Not only that, Inhofe said Trump supporters have been inundating his office with threats

“We’ve had calls. We’ve had threats,” Inhofe said. “I have many very, very close friends mad at me, when all I’m doing is upholding my oath.”

Inhofe is hardly a NeverTrumper, although he has said Trump could be “offensive.”

In 2018, he told Tulsa World that “some good things are happening,” adding that “no one can argue this guy hasn’t done a great job.”

RELATED: No Mention of Trump as Acting Secretary of Defense Turns to Pence and Congress Before Rolling Out National Guard

“So many people hate the president,” Inhofe said at the time. “They really do. You see the media [in Washington] — everybody knows how unfair it is. But you should think about what this guy has done.”

He added that while the media in Oklahoma was “great … the press in Washington is not. They’re all bad. What Trump says is really true.”

Inhofe said Wednesday that he was unhappy — as was Pence — that Trump had turned his ire on the vice president.

“I had a long conversation with [Pence],” Inhofe said. “He said, ‘After all the things I’ve done for [Trump].’”

On Wednesday, before rioters stormed the Capitol, Trump spoke to a crowd of protesters and threw Pence under the bus.

“We want to be so respectful of everybody,” Trump said during his speech, according to The New York Times.

“And we are going to have to fight much harder. And Mike Pence is going to have to come through for us, and if he doesn’t, that will be a sad day for our country. Because you’re sworn to uphold our Constitution.”

According to Axios, the president banned Pence’s chief of staff, Mike Short, from the White House on Wednesday, as well.

For conservatives, this should be both dispiriting and alarming. Pence has been one of the most consistently conservative members of the Trump administration — as well as one of the president’s most steadfast allies.

You may say that of course he is — he’s his vice president, after all. For conservatives, however, the fact that the president wants to distance himself from Pence should be one of the most dispiriting aspects of what happened Wednesday.

Mike Pence has been urged to use the 25th Amendment against President Trump — and not just by Democrats. One hopes for a resolution to this crisis that doesn’t end that way.