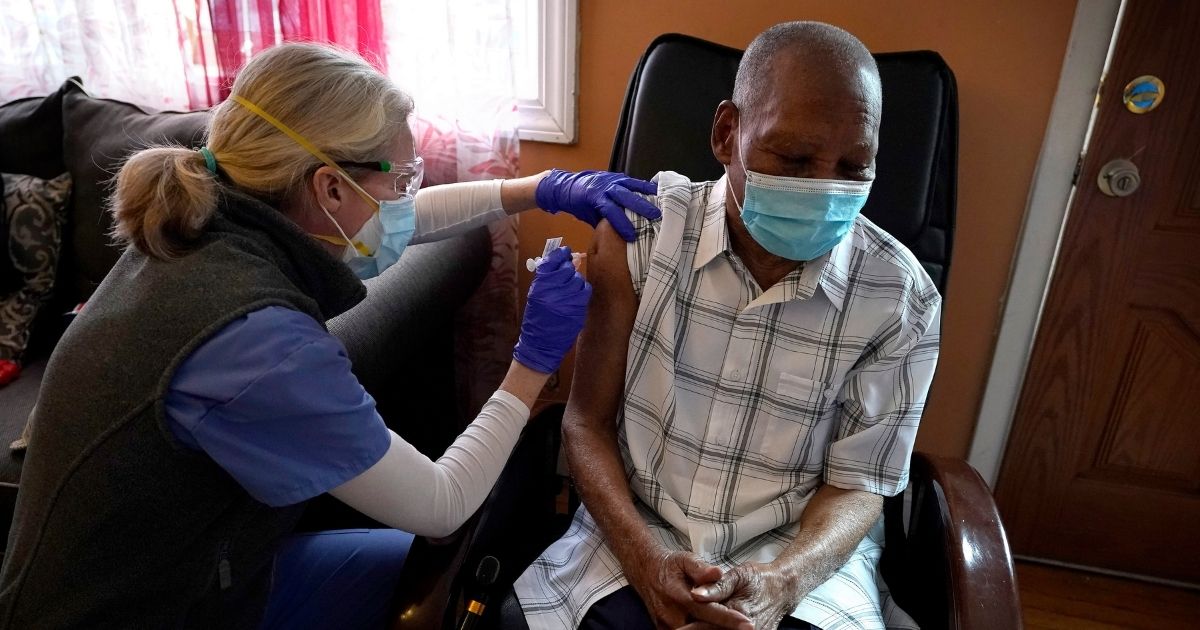 A recent study from Fundstrat, an independent financial research firm, found that at least 50 percent of residents in 10 states have either been infected with the coronavirus or vaccinated against it, meaning those states are creeping closer to “presumable herd immunity.”

CNBC host Carl Quintanilla posted to Twitter a snippet from the study, which also cited the COVID Tracking Project and the Centers for Disease Control and Prevention as its sources.

Citing Fundstrat’s study, which was published Wednesday, he wrote, “FUNDSTRAT: Slowly, ‘the US is getting to that threshold of presumable herd immunity,’ as seen in this ranking of states by ‘combined penetration’ (vaccinations + infections).”

“As we commented in the past, the key figure is the combined value >60%,” the study reportedly added.

FUNDSTRAT: Slowly, “the US is getting to that threshold of presumable herd immunity,” as seen in this ranking of states by “combined penetration” (vaccinations + infections). “As we commented in the past, the key figure is the combined value >60% ..” @fundstrat pic.twitter.com/rZsS7oTUvt

Once that percentage is 50 or higher, it can be assumed at least half the state’s population has either had the virus or been vaccinates, making those residents less susceptible to infection.

Although the CDC has not laid out a definitive number regarding herd immunity, common thresholds for infectious diseases range from 50 percent to 90 percent, depending on how contagious the disease is, according to a report from Gypsyamber D’Souza and David Dowdy at the Johns Hopkins Bloomberg School of Public Health.

Will you get the COVID vaccine, once you have the opportunity to do so?

Several other states — Mississippi, Wyoming and Kansas — sit just below the threshold at 49 percent combined penetration, a promising sign more states are well on their way to herd immunity.

It’s possible this data even understates how quickly the United States is approaching herd immunity, if CDC models are to be believed.

According to a November NPR report, a CDC model “calculated that the true number of infections is about eight times the reported number, which includes only the cases confirmed by a laboratory test.”

If this model still applies to today, which is likely considering many people contract the virus but walk around entirely asymptomatic, combined penetration calculations may be even higher than what is currently known.

Meanwhile, a pair of letters published this week in the New England Journal of Medicine revealed positive developments with regard to Pfizer and Moderna’s respective vaccines.

RELATED: After Claiming No Vaccine Existed Under Trump, Biden Faults Him for Not Buying Enough, Having No Plan

Researchers said data shows the first dose of the Pfizer vaccine is 92.6 percent effective, and that a change in policy to single dosing is warranted.

In a separate letter to the editor, multiple researchers — including several from Moderna — said that the data points toward Moderna’s vaccine being highly effective against all COVID variants except for the South Africa variant.

The newly found confidence is also further discussed in a Wall Street Journal commentary piece by Marty Makary, a professor at the Johns Hopkins School of Medicine and Bloomberg School of Public Health.

“Amid the dire Covid warnings, one crucial fact has been largely ignored: Cases are down 77% over the past six weeks,” he wrote Thursday. “Covid-19 deaths in the U.S. would also suggest much broader immunity than recognized. About 1 in 600 Americans has died of Covid-19, which translates to a population fatality rate of about 0.15%. The Covid-19 infection fatality rate is about 0.23%.”

Everything points to confidence in the U.S. overcoming the pandemic by summer, even if the media continues to push the panic button narrative every day.

That doesn’t mean caution should go by the wayside. Masks, social distancing and vaccines continue to be an important part of the healing process. But it appears herd immunity is a soon-to-be realistic achievement rather than a distant goal that’s impossible to reach.

Targeted help toward those most at risk — such as individuals with pre-existing conditions or the elderly — continues to be beneficial, as well.

Although the pandemic has lasted over a year and taken its toll around the U.S. and across the world, hopefully, the end is in sight, which should be seen as great news to everyone.