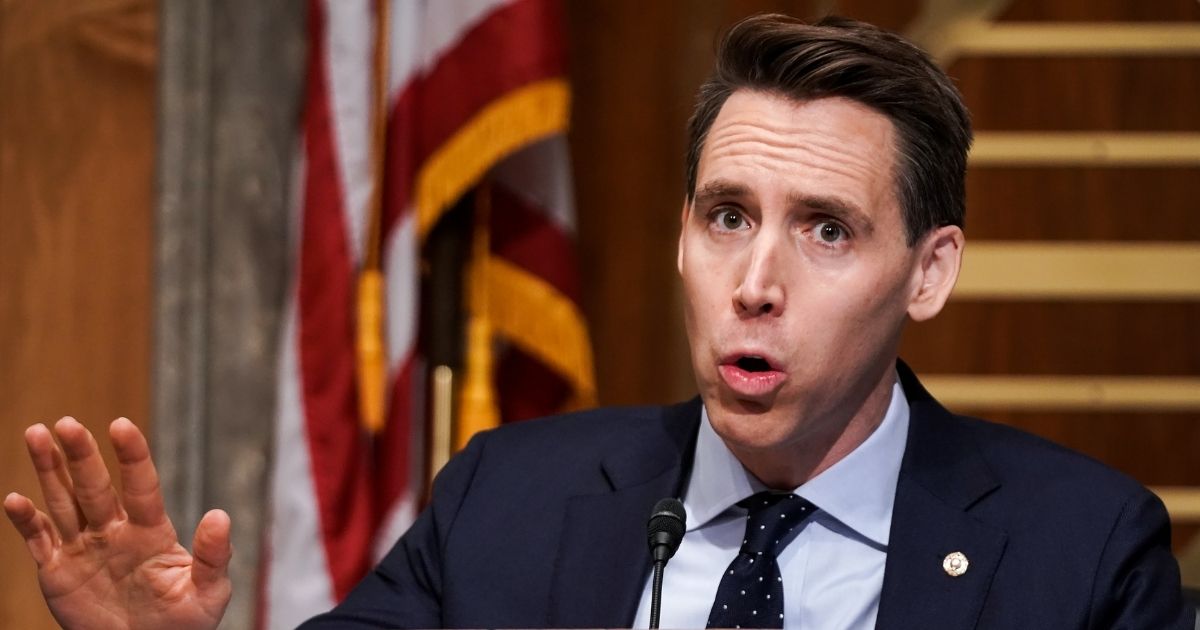 On Wednesday, Missouri Sen. Josh Hawley will be one of 12 GOP senators who will vote against certifying the Electoral College results because of concerns about voter fraud and irregularities, setting up a messy legislative showdown.

Hawley was the first of the group — dubbed the “dirty dozen” by the liberal media — to announce he’d sign on to an objection by House Republicans, which triggers provisions in the Electoral Count Act of 1887 that force a fuller debate on the issue.

He has plenty of enemies in high places right now — including Senate Majority Leader Mitch McConnell of Kentucky, who made it especially clear in advance of the certification he didn’t want any Republican objections in the upper house, and CNN’s Jake Tapper, who called the 12 senators objecting the “sedition caucus.”

If reports from Hawley himself are accurate, he also has enemies in very low places who might be a more corporeal danger to himself and his family.

In a tweet late Monday night, the senator said that “while I was in Missouri, Antifa scumbags came to our place in DC and threatened my wife and newborn daughter, who can’t travel.

“They screamed threats, vandalized, and tried to pound open our door.

“Let me be clear: My family & I will not be intimidated by leftwing violence.”

Tonight while I was in Missouri, Antifa scumbags came to our place in DC and threatened my wife and newborn daughter, who can’t travel. They screamed threats, vandalized, and tried to pound open our door. Let me be clear: My family & I will not be intimidated by leftwing violence

Lest you accuse the senator of attention-seeking tactics, a group called ShutDownDC tweeted about a “protest” at Hawley’s home and live-streamed the affair.

“Surprise! We’re at Josh Hawley’s house holding a vigil for democracy,” the group said in a tweet that included the livestream.

“We came to let Hawley know that his actions are undemocratic and unacceptable,” ShutDownDC activist Patrick Young said in a statement on the group’s website.

“Voters decided who they wanted to be president and now Hawley is trying to silence their voices, even after Republican election officials certified the vote counts. And let’s not forget that the bulk of the votes they would throw out come from Black and brown voters. This is an attempted coup waged by silencing the voices of people of color.”

The statement was echoed by Washington Post congressional reporter Mike DeBonis, who emphasized the “hour long vigil” part of it.

Hawley was unimpressed with that characterization, saying, “Now ‘vigil’ means screaming threats through bullhorns, vandalizing property, pounding on the doors of homes and terrorizing innocent people and children.”

DeBonis — as many in the establishment media will in the coming days, no doubt — seemed to question whether ShutDownDC is a group of “Antifa scumbags” and whether the group was “threaten[ing] my wife and newborn daughter” or this was just how the kids like to vigil these days.

On the first count, unless a group explicitly calls itself “antifa,” there’s absolutely no one to the left of Mitt Romney who’ll apply the appellation. (For that matter, go far enough left on the spectrum and you’ll find people who’ll pretend antifa doesn’t exist at all, even if a group calls itself antifa.)

In its Twitter profile, ShutDownDC makes itself sound harmless enough, describing itself as “an organizing space where individuals and groups can come together to organize direct action in the fight for justice,” which sounds strangely like it was lifted from a left-leaning co-working venue’s venture capital pitch.

Is antifa a national threat?

It’s a bit less harmless than that, though; the group routinely retweets from explicitly or implicitly antifa accounts. On its website, it seems to forsake violent methods of protest — if only for the not-so-Gandhi-esque reason it believes it would come out on the losing end of things. But it doesn’t disapprove of political violence, either, if you want to do it.

“While we respect everyone’s right to defend themselves and the people they love, we recognize that the police and military forces that may be mobilized to prop up the Trump regime have a far greater capacity for violence than we could ever imagine,” ShutDownDC’s website read as of Tuesday morning.

“Without making value judgments about the tactical approaches other people and organizations may choose to embrace, we plan to use the tools and tactical approaches that we have the capacity and expertise to implement, including disruptive direct action, mass mobilization, coordinated non-compliance, mutual aid, and other forms of civil resistance.” [Emphasis ours.]

.@HawleyMO you oppose fascism? Are you an anti-fascist?

Antifa is trending on Twitter today, so here’s your reminder that antifa is short for antifascist. And if you’re against antifascists, you’re for fascists. Simple logic.

Oh, so you don’t like the “Party of Lincoln,” the Republicans? I guess that means you don’t like Abraham Lincoln. And why wouldn’t you want to make America great again, no matter what your conception of America might be? Leftists, I beseech you — before you make this shopworn defense of antifa, look up “begging the question.” Those words don’t mean what you think they do. (Or at least not in a colloquial sense.)

The second question — whether ShutDownDC “screamed threats, vandalized, and tried to pound open [Hawley’s] door” — is another one entirely. What’s on video makes it clear this wasn’t an “hour long vigil.” Any time a group of people come out to a politician’s home for a protest, the message is a minatory one: We know where you live.

What else were they accomplishing? “Activists lit candles and delivered a copy of the US Constitution to Hawley’s door. The crowd chanted ‘Shame! Shame on Hawley!’ and ‘Protect Democracy from the GOP,’” the group’s website read. “They also read messages from voters in the states whose election results Hawley and the other Senators are planning to contest, including Missouri and Pennsylvania.”

When a senator reads from a phone book during a filibuster — as former New York Sen. Alfonse D’Amato famously did in 1986 — the point isn’t that he’s very interested in the phone book. The point is that he’s still talking and the Senate can’t vote.

When people stand outside your house with a bullhorn and read “messages from voters in the states whose election results Hawley and the other Senators are planning to contest, including Missouri and Pennsylvania,” the point isn’t that they’re reading those messages to you. The point is that they’re doing it 30 feet from you, your wife and your child, from your sidewalk and on your grass. They might as well have been reading from the phone book — if they can still find one in physical form — because the content of the action would have been the same.

As for what did and didn’t happen on Monday night, the video makes it clear they screamed threats. As for vandalizing and trying to pound open his door, it’s worth noting the livestream doesn’t necessarily exclude any acts that might have occurred off-camera.

What ShutDownDC was willing to show us, however, was bad enough already.