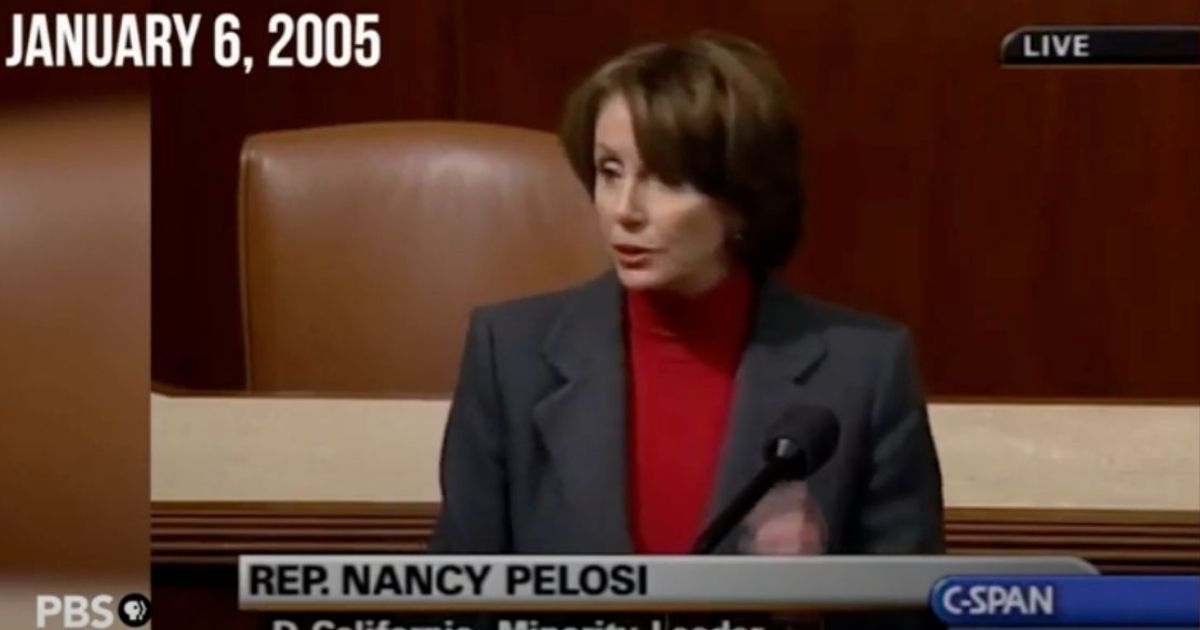 Her comments during the Electoral College vote on Jan. 6, 2005, focused on irregularities seen with the voting machines and ballots — i.e. the kinds of issues Trump raised in the aftermath of November’s election.

Trump’s legal counsel David Schoen presented the Pelosi clip to senators sitting in trial to debunk the House impeachment managers’ argument that Trump incited the incursion into the Capitol by questioning the outcome in some key swing states.

“When the House managers realized that the president’s actual words could not have incited the riot, as you alleged in your article of impeachment, you attempted to pivot,” Schoen said.

“You said that raising the issue of election security and casting doubt on the propriety of our elections was dangerous,” he added.

To give Pelosi’s words in 2005 more context, let’s recall the circumstances of the 2004 presidential race between then-President George W. Bush and then-Sen. John Kerry of Massachusetts.

Bush won by a narrow 286 to 251 Electoral College vote, and the results in Ohio, with its 20 electoral votes, played a decisive role.

“The normally perfunctory ceremony of counting and certifying Electoral College votes was delayed for about four hours as Democrats unsuccessfully challenged Ohio’s votes for Bush,” CNN reported at the time.

Do you think the Trump legal team made an effective defense?

“There are still legitimate concerns over the integrity of our elections and of ensuring the principle of one person, one vote,” Pelosi said in the clip presented by Schoen.

“But constantly shifting vote tallies in Ohio and malfunctioning electronic machines, which may not have paper receipts, have led to additional loss of confidence by the public.”

“This is their only opportunity to have this debate while the country is listening, and it is appropriate to do so,” Pelosi said.

The 2005 election is not the only time the speaker questioned the authenticity of election results, however.

RELATED: If Pelosi and Biden Get Their $15 Minimum Wage, US Would Have Highest Minimum Wage in the World

In May 2017, shortly into Trump’s presidency, Pelosi tweeted, “Our election was hijacked. There is no question. Congress has a duty to #ProtectOurDemocracy & #FollowTheFacts.”

Our election was hijacked. There is no question. Congress has a duty to #ProtectOurDemocracy & #FollowTheFacts.

By the House manager’s own standard, this is incitement-of-violence type language.

Trump certainly used none more emphatic than “hijacked” in questioning the results of November’s contest.

While Pelosi had nothing to point to regarding her claim, save the now-debunked Russia collusion hoax, Trump had multiple issues he could and did raise.

There were the last-minute changes in election procedures mostly by Democratic officials, without the approval of state legislatures, in places like Michigan, Pennsylvania, Nevada and Georgia — changes that vastly increased the number of mail-in ballots and, with that, the chances for fraud.

Also, there were exceptionally low absentee ballot rejection rates and documented problems with the ballot counts conducted on Dominion Voting Systems machines in Michigan and Georgia.

Two members of the board of canvassers in pivotal Wayne County, Michigan, at one point, refused to certify the election results because of the many irregularities. They also called for a full audit, which has not happened.

The nature of Trump being ahead in Pennsylvania, Georgia, Wisconsin and Michigan on election night, only to see his leads evaporate in the early morning hours of the next day, raised questions in many people’s minds.

Multiple polls published since the 2020 election found that 70 percent or more of Republicans doubted the fairness of the election results.

With courts having turned a deaf ear, Trump supporters wanted these issues debated in Congress, as Pelosi and Democrats had done in 2005.

Trump encouraged the hundreds of thousands on hand on Jan. 6 to “peacefully and patriotically” do so.

The relatively small number who chose to engage in violence that day at the Capitol had different plans and should be held accountable for their criminal conduct.

However, Trump’s words questioning the legitimacy of the election results were not incitement to violence any more than Pelosi’s were in 2005 and 2017.

The impeachment of the former president is nothing more than a political show with a duplicitous and vengeful Pelosi as the prime mover behind the production.