Home Daily News First Responders Called in to Rescue Cow After It Ran Through Fence... 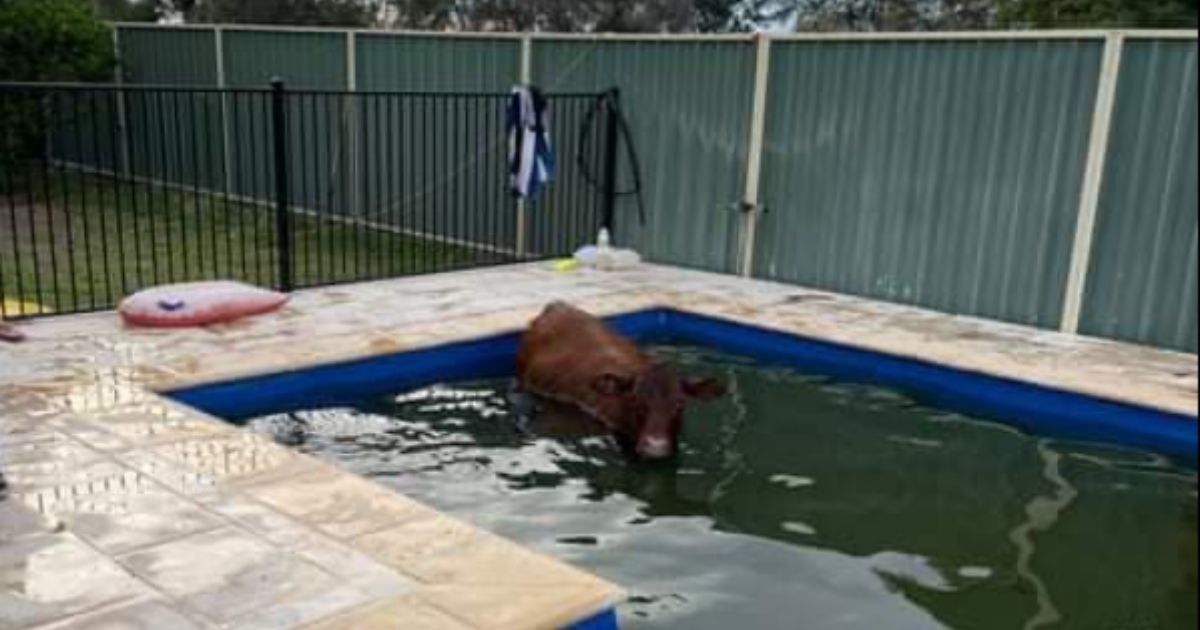 If you own a pool, you no doubt are very careful about what is allowed in it.

Many pool owners put up safety fences to keep people and animals out of the water during off hours, and yet despite those measures, you occasionally find that some hapless creature has found its way into the pool.

Usually, however, it isn’t a cow.

That’s the sight that greeted one family in Gilgandra, New South Wales, on the day before Easter.

It was around 6:30 p.m. that day that the New South Wales State Emergency Service got a unique call for assistance.

TRENDING: Dr. Fauci Admits, Under Oath, Biden Admin Is Pushing CDC Guidance on Americans, But Not on Illegal Immigrants

“It was a very unusual event; I’ve never had a cow in a pool before,” Geoff Kiehne, SES commander of the Gilgandra unit, told 9news.com.au.

Though the pool was fenced, the 660-pound animal somehow made its way past the barrier.

“We suspect something startled her and she ran through a panel straight into the water,” Kiehne explained.

Thankfully, the cow did not appear stressed — quite the opposite. She seemed to be thoroughly enjoying her weekend soak.

“When we arrived, the cow was quite happy and very content in the pool, and she was just in the shallow end of the pool,” Kiehne said.

“Because the cow was quite relaxed and appeared very good-natured, we thought we could coax her to walk up the steps of the pool.

“We didn’t want to distress her because it’s much easier working with a cow that’s cooperative than one that’s not being cooperative.”

A few of the responders’ initial attempts at coaxing were unsuccessful, but eventually the crew was able to help the cow out of the pool and onto dry land. The NSW SES Facebook page shared the story and photos from the rescue the following Monday.

RELATED: ‘Resilient' Dog and Owner Finally Reunited After 5 Years: ‘It's a Miracle'

“On Saturday afternoon the NSW SES Gilgandra Unit were ‘Mooed to respond’ to an unusual, large animal rescue call — a cow in a swimming pool,” the April 5 post read.

“On arrival, they found one very friendly, healthy cow standing neck deep in water. After a period of time and some significant coaxing, she was freed from her watery escape. A great outcome for all. Large animal rescue is a capability in which NSW SES Gilgandra Unit have two accredited operator/trainers.”

If the cow hadn’t been so amenable, it certainly would have been a much more difficult rescue, a fact Kiehne noted.

“We were very happy with how the rescue went, and we’re lucky we didn’t have to use a crane,” he told 9news.com.au.