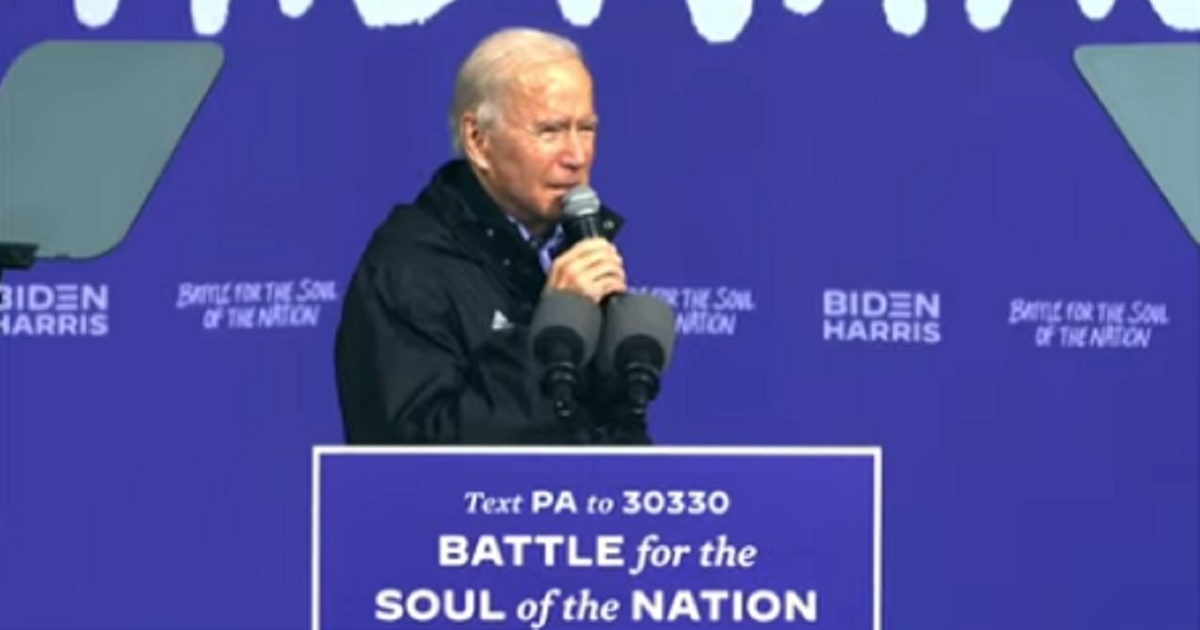 Knowing that their base will never fact check the lies, Democrats have persisted in spreading certain myths about President Donald Trump.

One of the most enduring — and most egregious — is the vicious lie that Trump is a white supremacist.

Besides being helped by the usual lack of critical thinking skills on the left, it is also fueled by one particular comment that has been repeatedly twisted and misquoted.

On the campaign trail in his “Souls to the Polls” rally in riot-torn Philadelphia on Sunday, Democratic presidential candidate Joe Biden repeated the lie based on a remark that launched a thousand leftist meltdowns.

“Folks, look, from the day he announced, from the moment he came down that escalator, what did he say in New York?” Biden said to his supporters at his drive-in rally (it’s a bizarre format that makes it appear he’s speaking to anthropomorphic cars that honk their replies like Herbie from the classic eponymous Disney franchise).

Biden was referring to was the speech Trump made when he announced his GOP presidential candidacy June 16, 2015, at Trump Tower in New York City after descending the escalator with wife Melania.

In that speech, Trump touched on many themes that would endure throughout his campaign and presidency, such as how America needed to “win” again, balance unfair international trade relationships, and how illegal immigration was detrimental to America’s interests.

Do you think Joe Biden’s lies will catch up to him on Election Day?

Clearly, Trump qualified his remarks that not all Mexicans are rapists, but that maybe the kind of people breaking the law and sneaking into the country were not their country’s best citizens.

He was expressing a concern that a porous southern border would allow for criminals to filter in from anywhere in the world, but the die was cast when Trump spoke the unspeakable truth — that some people who break the law by coming into the country illegally also break other laws. And the remarks forever became a target of the warped leftist narrative.

But Biden added in a little more red meat for his rabid base to gnaw on when he mentioned Trump’s supposed ban on “all Muslims coming into the United States,” another persistent leftist prevarication.

The so-called “Muslim ban” was actually a 2017 executive order to restrict immigration from certain known terror-supporting nations, with the emphasis on tightening America’s borders rather than excluding any particular religion.

The executive order survived a Supreme Court challenge, but that hasn’t stopped leftists from intentionally mischaracterizing the policy to their perceived advantage.

Of course, lies are Biden’s main currency this election cycle, at least when he’s not locked in his basement bunker. Besides lying, he also resorted to pandering to the Philadelphia crowd (or rather, glorified traffic jam), telling them that he was wearing a jacket with the Philadelphia Eagles NFL football team logo on it when in fact it was the Blue Hens logo from his alma mater, the University of Delaware.

The problem for Biden and the Democrats is that they don’t have much else to run on besides lies and, of course, the COVID-19 pandemic panic, which is why they trot out the same tired tall tales any chance they get.

Miraculously, even with more than five years of Democrats and their media allies hammering Trump for his supposed racism, his support among Latino and black voters has multiplied over his 2016 numbers.

It could be that the lies just aren’t working anymore, even as Biden continues to churn out such untruths as the Obama-era whopper of being able to “keep your doctor” when speaking about resurrecting the disastrous Obamacare plan, or when dismissing his son Hunter Biden’s corruption.

The Trump administration has an amazing and undeniable record of economic prosperity, brokering unprecedented peace deals in the Middle East, record-low black unemployment prior to the pandemic, and the return of manufacturing in the U.S.

If Biden wins the presidency Tuesday, it will only be because of collusion between the media and the Democratic Party to smear Trump, and they’ve been working at it every day since Election Day 2016 when former Secretary of State Hillary Clinton lost the presidency liberals thought was her right.

Trump deserves re-election, if for no other reason than his opponent is a doddering, old, corrupt politician and shameless liar who is unfit for office.