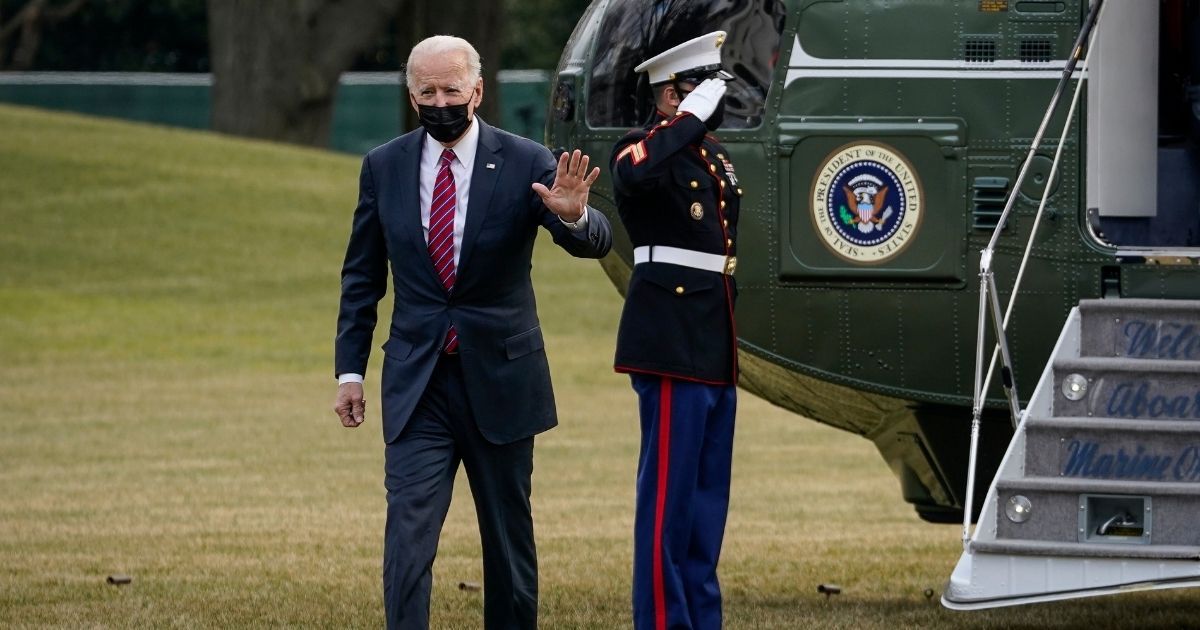 President Joe Biden has made climate change a top priority since taking office on Jan. 20. In doing so, the House GOP estimates he will kill a total of 1.41 million jobs with his currently stated policies.

The House GOP Twitter account posted a graphic breaking down the potential job losses due to Biden’s executive orders.

President Biden’s first two weeks have been a sprint to the left.

After bucking the inaugural message of “unity,” far-left policies have been the only priority.

The American people have already been left behind and hundreds of thousands of jobs have been destroyed. pic.twitter.com/ziYtC0hiXR

So far, the executive order that has probably received the most vocal blowback is the one ending construction of the Keystone XL pipeline.

TC Energy estimated that this project would create 11,000 jobs, which is why the GOP said Biden’s order killed those 11,000 jobs.

In an effort to save Biden from negative press, PolitiFact “fact-checked” this claim. They called it “half-true,” but their reasoning made little to no sense.

“In the report, [TC Energy] wrote that 10,400 estimated positions would be for seasonal construction work lasting four to eight-month periods,” it said.

“Since the State Department defines ‘job’ as ‘one position that is filled for 1 year,’ that would equate to approximately 3,900 jobs over a two-year period.”

Try as they might, PolitiFact cannot change the damage done by Biden’s order by applying a specific definition of the word “job.”

Anyone who knows anything about construction understands that most jobs in that industry are temporary. A worker works on a project for a number of months, and then he moves on to the next project.

The effort to downplay the severity of Biden’s executive order by PolitiFact is clearly a political one, and most logical Americans understand that all 11,000 of those construction positions were jobs.

In addition, Phil Flynn said in a Fox Business opinion article that Biden’s hatred toward fracking can have other consequences.

“Biden’s disdain for fracking has been transparent and will assuredly put more regulations on the industry and make it harder to build much-needed infrastructure which will inevitably lead us to much higher energy prices,” he said.

Despite the pipeline being more efficient and less likely to cause spills than other methods like rail transfer, Biden shut down the project in the name of supposed climate change concerns.

Next, Biden put the United States back into the flawed Paris Climate Agreement.

In 2017, The Heritage Foundation called it “essentially an agreement to put hundreds of thousands of middle-class American workers in coal, steel production, oil and gas, construction and manufacturing into unemployment lines.”

“Our Heritage Foundation colleague Nick Loris estimates that, over the next decade, the agreement will cost Americans an extra $30,000 per family of four in higher energy prices and some 400,000 lost jobs (200,000 in manufacturing alone),” they said.

Furthermore, they argue that while America’s participation in the agreement can be seen as mostly “symbolic,” Heritage Foundation colleague Nick Loris “estimates that, over the next decade, the agreement will cost Americans an extra $30,000 per family of four in higher energy prices) and some 400,000 lost jobs (200,000 in manufacturing alone). He likens the Paris Agreement to a $2.5 trillion global tax on American production. So the costs to America would be anything but ‘symbolic.’”

On top of that, it mentions that, “remaining in the pact commits the U.S. to reducing our carbon emissions by nearly 30% below 2005 levels — even though most of the world’s major polluters will continue to emit massive amounts of greenhouse gases into the atmosphere.”

In other words, the agreement fails to adequately address the real factors that are leading to changes in the climate. While countries like China and India continue to pollute the air, the United States gets punished.

American Petroleum Institute president and CEO Mike Sommers warned of the potential consequences this decision might have back in September, according to Fox Business.

“Banning federal leasing and development on federal lands and waters would derail decades of U.S. energy progress and return us to the days of relying on foreign energy sources hostile to American interests,” he said.

If the ban becomes permanent, Fox Business said it could result in 1 million job losses by 2022.

A 2020 report by the API said that “banning hydraulic fracturing and federal leasing could trigger a U.S. recession — marked by declining economic output as measured by Gross Domestic Product.”

Their estimate resulted in a $1.2 trillion reduction in GDP by 2022 if an outright ban on fracking and leasing of oil and gas occurs.

To compound these problems, Biden still does not have a true plan for clean energy. Flynn said Biden claims his $2 trillion clean energy plan would create “millions” of jobs, but he implies that the plan lacks the details of how such a feat would be accomplished.

At this point, it appears Biden cares more about satisfying the climate change activists than he does about working-class Americans.

While he signs orders that are supposed to help the climate — though even that fact is questionable — he effectively ignores the people whose livelihoods he is affecting.

Vague promises of clean energy jobs at some future time are not going to cut it. Biden needs to answer for the jobs he has killed and the difficulties he has brought on many U.S. citizens.