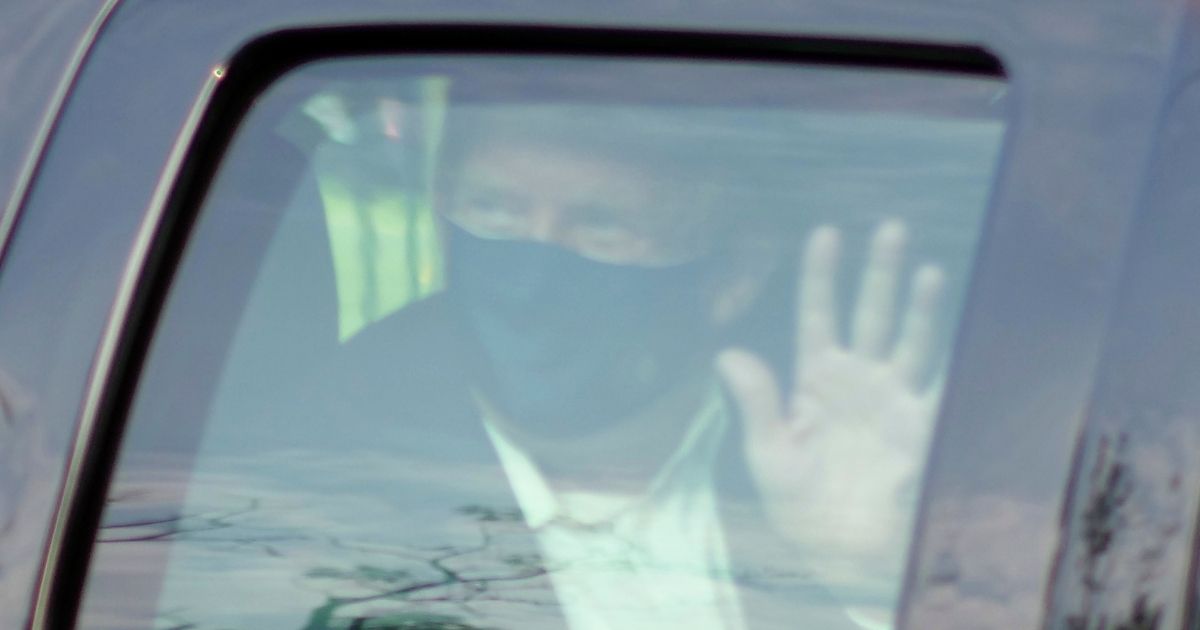 An attempt by CNN to have a former White House physician condemn President Donald Trump’s Sunday drive-by to thank his supporters for their prayers crashed and burned when Dr. William Lang said there was nothing to criticize.

Trump, who was taken to Walter Reed National Military Medical Center on Friday after being diagnosed with the coronavirus, drove past supporters outside the Bethesda, Maryland, facility on Sunday. Wearing a mask inside an SUV, Trump waved to those who have been holding a vigil outside Walter Reed on his behalf.

“Dr. Lang, I want to ask you about the drive-by,” CNN host Ana Cabrera said to set up the segment, according to a video posted on Twitter. “Did the president needlessly put Secret Service officers at risk for this photo op?”

“Well, everything you do has risks and benefits. He wore a mask, the Secret Service agents wore a mask, most likely N95 masks,” Lang said.

“By all of them wearing N95 masks — you couldn’t tell exactly from the pictures, but that’s what you would expect to happen — that makes the risk actually very, very small,” he said.

Lang noted that every activity can have a potential downside.

“Is there an increased risk? Maybe tiny,” the doctor said. “But they took measures to reduce the risk, and that’s what it’s all about, is risk management, risk reduction.”

Do you think the president’s car ride Sunday was too risky?

Cabrera then took over as a medical expert.

“You’ve got to also wonder about the president’s health and whether this was in his best interest. The president says in this new video that it’s been an ‘interesting journey,’ almost like it’s over,” she said.

The CNN host then asked Lang to assess Trump’s health on Sunday based on information about his condition as of Friday and Saturday.

“Well, the fact is that he is the president of the United States,” Lang said. “And, of course, they are going to throw everything at him to get him as well as they can as fast as they can. He has never been significantly symptomatic.”

Lang said a video Trump released Sunday on Twitter did not sound like a man in severe respiratory distress.

“One of the things that I find very interesting is when you talk to a patient who has any kind of respiratory illness, one of the first things you do is listen to them. You listen to the way they talk. When you listen to his tone, his ability to talk in complete sentences, how he sounded in the release just a few minutes ago, he sounded very strong,” he said.

“So that gives you a very, very good indication that he does not have significant, active respiratory disease. And throughout this, the only real complaint that the president has had has been the fever.”

White House Chief of Staff Mark Meadows said critics of Trump’s Sunday drive to see supporters were missing the point that he has been surrounded by other people for days, according to Fox News.

“We came here on Marine One, the U.S. Secret Service agent that is with him has been with him, and yet we took additional precautions with PPE and others to make sure they were protected,” Meadows said. “A number of folks are trying to make a big deal about that when I know myself and Secret Service details are with him every day and want him to return to the White House as expeditiously as possible.”

He said that when he is working with Trump at Walter Reed, he is “not going in in a hazmat suit.”

“I’m in a suit, I go in with a mask, and we have eye protection as well. We’re close to him, we continue to engage in his room and in the working environment as well.”

Meadows said that “this is a message to our military men and women.”

“I’m not having bullets shot at me, and I may put myself at risk because of this virus,” he said. “But the president is going to defeat this virus. I’m not putting myself in harm’s way with bullets.

“This is an enemy that we will defeat and we will do that together, but those are the risks associated with this job.”