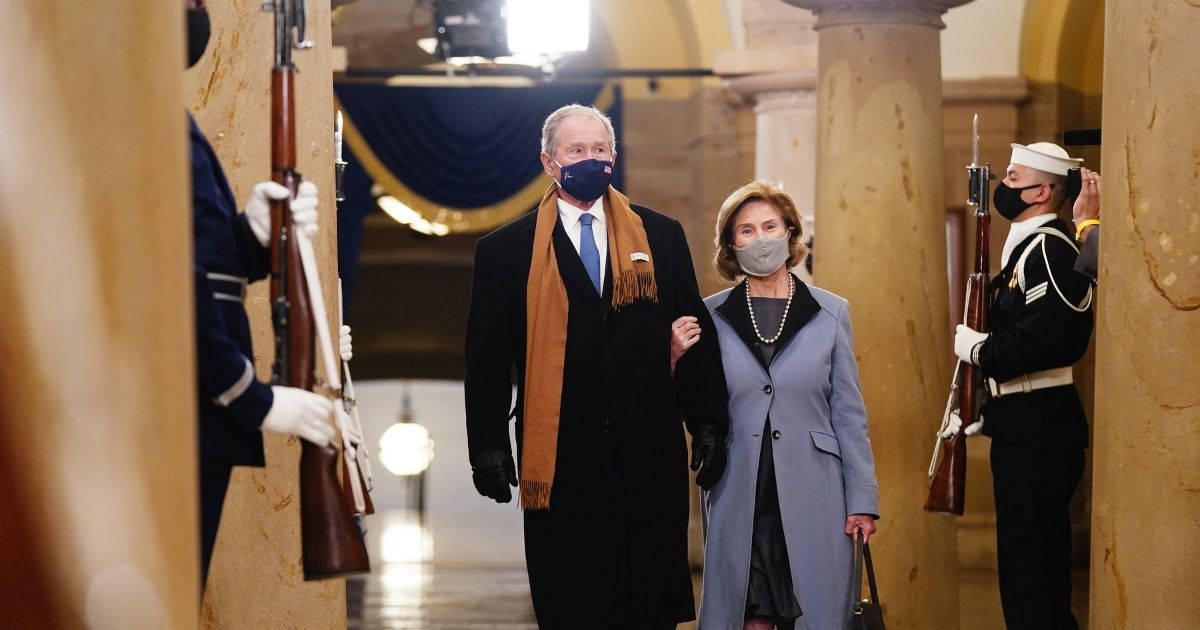 Former Republican President George W. Bush, in a Friday piece for The Washington Post, called for granting undocumented aliens within the country a gradual pathway to legal residency and ultimately citizenship.

“The help and respect historically accorded to new arrivals is one reason so many people still aspire and wait to become Americans,” Bush, the 43rd United States president, wrote for The Post.

“So how is it that in a country more generous to new arrivals than any other, immigration policy is the source of so much rancor and ill will?” he added, arguing that both Republicans and Democrats have politically exploited the issue.

In the opinion piece, Bush lays out reforms to “restore confidence” in the U.S. immigration system. This proposal covers the Deferred Action for Childhood Arrivals program, border security, and undocumented immigrants.

Under DACA, a policy instituted in 2012 by the Obama administration, individuals unlawfully brought into the country as children and residing in the U.S. since are eligible for deferment against removal, a status they need to renew biannually. These persons are also eligible for work authorizations.

Bush wrote that restoring “confidence” in the American immigration system would entail ensuring that DACA recipients get permanent legal status in the country.

Bush argued that advocating for a citizenship path for DACA recipients is not an advocacy of open borders but a recognition that “young men and women who grew up in the United States, and who never knew any other place as home, are fundamentally American. And they ought not be punished for choices made by their parents.”

As of September 2017, 689,800 individuals, the vast majority of whom were born in Mexico, were granted DACA status according to the United States Citizenship and Immigration Services (USCIS).

In 2018, the USCIS found that roughly 8 percent of all DACA applicants, both approved and denied, had crimes such as assault and battery, rape, murder and drunk driving, among others, on their criminal records.

Do you think DACA recipients should be offered some pathway to U.S. citizenship?

Approximately 13 percent of accepted DACA applicants got arrested either after admission or before renewal, the agency also found in 2018.

On border security, Bush said that the country, while being welcoming to immigrants, should have a “secure and efficient border” fortified with necessary “manpower, physical barriers, advanced technology, streamlined and efficient ports of entry, and a robust legal immigration system.”

Bush’s comments come as the country faces an ongoing border crisis that the Biden-Harris administration has repeatedly downplayed.

Despite the problem going on for more than two months, neither President Joe Biden nor Vice President Kamala Harris has ever stepped foot in areas near the border to look at the matter for themselves.

Human smugglers have taken advantage of border officials’ resources being stretched by the surge of illegal entrants into the country and have smuggled countless illegal immigrants, including unaccompanied minors, into the U.S.

RELATED: Biden Finally Admits Situation at Border Is a ‘Crisis'

Bush argued that ensuring border security involves working with countries where these migrants originate to ensure they have freedom and opportunity to prosper at home and have less reason to attempt illegal entry into the U.S.

The former president also called for modernizing the asylum-request system for refugees to ensure that while those seeking refuge in the United States can achieve asylum in a “timely” fashion, those who do not merit asylum status don’t receive it.

He also called for increasing legal immigration on a merit basis and expanding temporary work opportunities for workers to perform “seasonal and other short-term jobs” and “help our economy, support their families and then return home.”

For illegal immigrants currently in the country, Bush argued in favor of laying out a pathway to legal residency and citizenship.

While arguing that “a grant of amnesty would be fundamentally unfair to those who came legally or are still waiting their turn to become citizens,” he wrote that it is essential to bring undocumented immigrants “out of the shadows through a gradual process.”

The requirements Bush proposed for undocumented immigrants seeking a pathway to legal U.S. residency and citizenship include “proof of work history, payment of a fine and back taxes, English proficiency and knowledge of U.S. history and civics, and a clean background check.”

“We should never forget that the desire to live in the United States — a worldwide and as powerful an aspiration as ever — is an affirmation of our country and what we stand for,” Bush wrote. “Over the years, our instincts have always tended toward fairness and generosity. The reward has been generations of grateful, hard-working, self-reliant, patriotic Americans who came here by choice.”

The former president’s opinion resonated with his pro-reform stance on immigration while in office, which often went against the views of many in the GOP.

Fox News reported that in 2007, Bush pushed for immigration reform which entailed making the border more secure while offering a citizenship pathway to undocumented immigrants already here. The reforms did not pass because they did not gather enough Senate Republican support.

In the opinion piece, Bush also announced that he would release a new collection of paintings and stories of immigrants titled ‘Out Of Many, One’ the upcoming week.

The book’s theme is gratitude, Bush says, and while humanizing the immigration debate, it also tells stories of several individuals who are grateful for their lives in the United States.