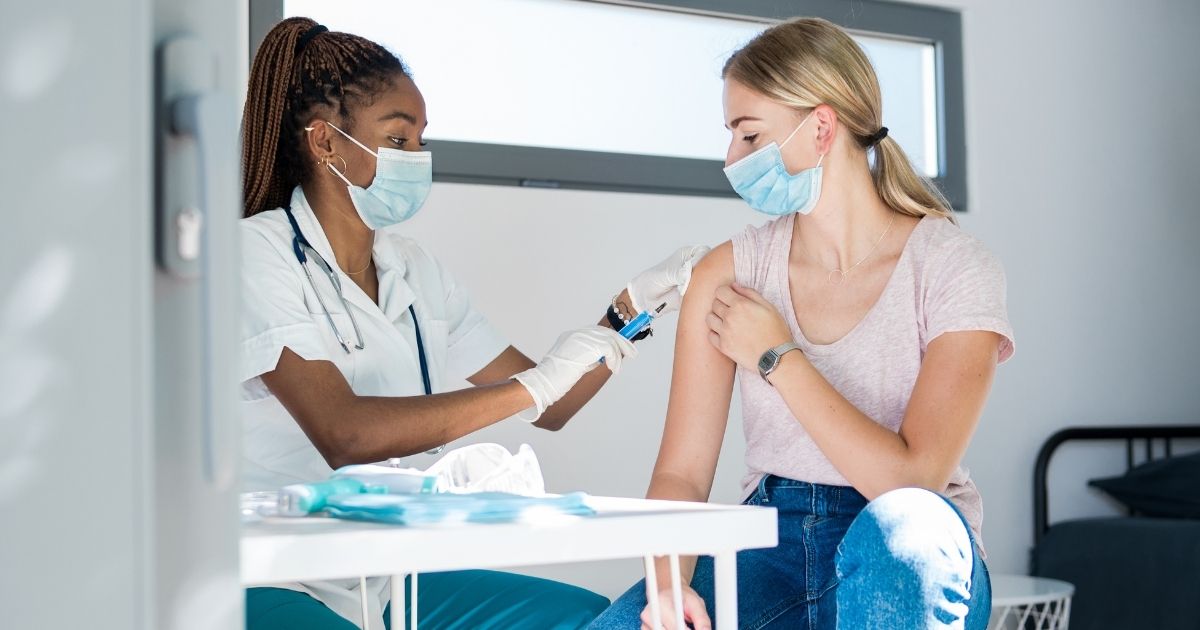 It isn’t surprising that some people are wary of the new COVID-19 vaccines, but what is significant is that the very people who have witnessed the devastation firsthand are the ones rejecting the inoculation in shockingly large numbers — and that could be telling.

Starting this week across the nation, front-line workers in nursing homes will get priority access to the coronavirus vaccine, but a majority of them in some places are flat out refusing to take it, the Wall Street Journal reported.

The vaccines, developed in record time under Operation Warp Speed by pharmaceutical giants like Pfizer and Moderna, are already being distributed in some spots, even as the discovery of the new virus itself is barely a year old.

Many people are understandably worried about the lack of data on the vaccines’ safety with such a short timeline, and that hurdle is too great — even for those who had a bedside view of the devastation the coronavirus caused.

Lori Porter, chief executive of the National Association of Health Care Assistants, told the news outlet that as many as 72 percent of certified nursing assistants said they’d refused to take the vaccine.

Generally, CNAs are skilled, but lower-paid health care workers who often take the brunt of staff shortages COVID-19 has caused in nursing homes and other long-term care facilities.

While they would certainly be the ones most compelled by experience and convinced by the scientific reassurances, they still remain largely unconvinced.

“I’m scared,” CNA Zenobia Carden said about the vaccine, even after acknowledging witnessing several residents die from COVID-19 at the nursing home she worked at earlier this year. “It takes years to come out with a vaccine, and for them to come out with it this quickly—I don’t trust it.”

Reluctant to outright mandate employees take the vaccine, employers have turned to giving away enticements like a free breakfast or a chance to win a television to get staff to take the shot.

Nevertheless, it seems to be a pervasive problem around the country. In the Buckeye State, “60% of Ohio nursing home staff refusing covid vaccine,” Marty Schladen of the Ohio Capital Journal tweeted after Gov. Mike DeWine expressed concern that the majority refused, the Columbus Dispatch reported.

Nursing home staff in Maine have objected in similar percentages, and even workers in California are refusing to be inoculated in significant numbers despite nursing home death comprising 35 percent of the state’s COVID-19 fatalities and the recently ballooning caseload, the LA Times reported.

Besides the fact that the vaccines are new and barely tested compared to the rigorous trials usually required for approval, this reluctance in the medical community could be a symptom of the larger issue: The politicization of the pandemic.

RELATED: NYC Landlord Facing His Own Eviction as ‘Deadbeat’ Tenants Catch Breaks from the Government

Throughout the coronavirus pandemic, any skepticism about the virulence of the virus or wisdom of draconian shutdowns was met with the mantra ‘follow the science’ to stifle any serious debate.

All along the way, however, officials did anything but as they imposed useless mask mandates, allowed Black Lives Matter protests despite closing businesses and imposing social distancing on everyone else, and even expressed skepticism about any vaccine simply because it was developed at the behest of President Donald Trump.

But worst of all, officials undermined science by suggesting that vaccination distribution begin based on race rather than in the nursing home populations that were actually ravaged by the virus.

Will you be getting the COVID-19 vaccine when it’s offered to you?

In short, governments and the medical community killed any credibility they had at the beginning of the pandemic with their repeated hypocrisy and mixed messages.

It’s no wonder these workers are reluctant to follow them now and are instead relying on their gut instincts to mistrust the untested vaccine and COVID-19 agenda.

That’s not to say their fears are founded or correct, but who could blame them  — and in turn, who will blame the rest of America for resisting as well?

Americans may have no choice in the matter if Dr. Anthony Fauci, the face of all things COVID-19 during the Trump administration and now set to become chief medical adviser for the incoming Biden administration, has his way.

Fauci was at the forefront of the early mixed messaging and is now flirting with the idea of mandating the vaccine in crafty ways such as requiring it for airplane travel or school enrollment.

For now, the nursing home personnel who assisted and cared for patients through the worst of the virus still have a choice, and they aren’t fully convinced to take this virtually untested novel vaccine.

Maybe they’re all wrong and the vaccine is safe, effective and the wonderful discovery everyone is touting it to be.

However, when the people on the front lines who have witnessed the impact of the virus and who are familiar with the science are still refusing the shot, maybe the rest of us should pay attention.