As online trading moves towards the mainstream, scammers have been getting more active. Most of them come in the form of fake brokers that rob new traders and investors of their money. However, there are also those that exploit the next step and capitalize on victims of other scams. The thing we’re talking about here is what’s called a refund or fund recovery company. There are many such companies — if we can even call them that because of their deceptive nature — present on the market.

That brings us to the start of our Echo Refund review. Echo Refund is one of the companies we just described, preying on vulnerable scam victims. What makes recovery scams dangerous is that they appear as a sort of legal entity, lending them legitimacy. However, these are nothing but groups of scammers trying to exploit people who have already been wronged. Luckily, the Echo Refund Company made our job easy for us in making it quite apparent it was a scam.

Now, when we say it’s apparent, that doesn’t mean everyone can spot it. Such scams can appear valid if you’re new to the trading world and we’re not blaming the victims. However, if you’ve been around similar malicious companies for a while, it’s simple to recognize Echo Refund. Naturally, we’re also not making these claims on a hunch, as we have solid proof of our statements. The goal of our Echo Refund review is to help you realize the firm is a scam and teach you to avoid similar companies.

So let’s dive into the more substantial part of our Echo Refund review and show you why we think the company’s crooked. 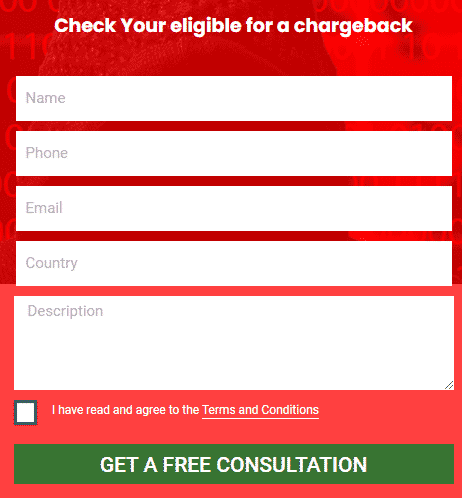 When you look at Echo Refund’s website, it’s not difficult to notice it isn’t a serious company. For starters, the browser tab image is still the default one you get from WordPress. That can immediately alert you to a lack of attention to detail. Next is the plethora of grammar and writing details, even in crucial areas. For example, their contact form says, “Check Your eligible for a chargeback.”

For an alleged legal firm that deals with exact language, such mistakes are an indicator of fraudulency. If it were one or two mistakes in obscure areas, we could let it slide, perhaps, but this is on the landing page. Furthermore, the entire look of the webpage looks amateurish. The image in the heading is a spooky Hackerman-like row of red 1s and 0s. The whole construction seems childish and hastily made to the point where no professional would consider it.

We already consider that enough not even to consider using the Echo Refund Company, but there’s way more. We hadn’t even mentioned that their entire website consists of a single page. Even worse, most of that page is just a variation on the “contact us” button, and it has very little substance. For example, although the Echo Refund constantly tries to get you to contact them, there’s no phone number present. There isn’t even an email you can reach out to, and the best they have is a form to fill out.

If our Echo Refund review still hasn’t convinced you, you can also look at the terms and conditions. They contain a ton of malicious clauses, rejecting any liability from anything that happens. You might think that’s to protect themselves, but there are also clauses stating that the terms may change at any time. Finally, we’d also like to mention that the firm can suspend you at any time.

One of the most noticeable things about the Echo Refund Company is how vague it is. You might think that’s normal for a scam, but even compared to other shady refund companies, Echo Refund is quite ambiguous. There’s no exact description of what they claim to do besides that they get your money back. No description of a process or anything; the company just says what it does.

In a way, that’s a good thing since it makes them easier to recognize as the scam they are. However, we’re baffled by the thought process of those that created the scam. It almost looks as if Echo Refund doesn’t even try and appear as a valid firm. However, like much of its peers, Echo Refund is no stranger to boasting fraudulent statistics. At least the stats they provide are believable to a degree if you’re not careful.

For example, the website allegedly boasts a 93% success rate. That’s high enough to be massively successful but just far enough from 100% to be believable. Furthermore, it claims to take 30-90 days to solve your issue, which is ridiculous. Anyone that’s dealt with legal matters knows that even tiny processes can stretch further than that. Now imagine a broker from another country scammed you for a massive amount of money.

Near the bottom of the page, Echo Refund has a star rating which is around 9.3. It also wrote up some fake reviews for itself, posing as massively satisfied customers. There are a few spots where the firm “describes” its process, but we wouldn’t call that a description. Most of these are step 1: tell us what’s wrong, step 2: we get your money back, step 3: everything’s great.

If you’ve read our Echo Refund review up to this point, the firm’s intent should be fairly apparent. Unlike other scams, the firm doesn’t even attempt to look legitimate. The process which they use to “get back your money” is entirely vague and intentionally so. The reason is that the company can’t actually do anything and is out for your card data. Although companies like Echo Refund can sound appealing after a loss, it’s just a siren’s call.

When you see a website that looks as fishy as Echo Refund does, it’s best to trust your gut. These services are fraudulent and prey on vulnerable people, stealing more of their money. If you ever hear someone talking about recovering money through a similar service, do them a favor and stop them.

Pelosi's Archbishop Speaks Out, Savages House Speaker for Her Support of Abortion: 'The Epitome of Hypocrisy'