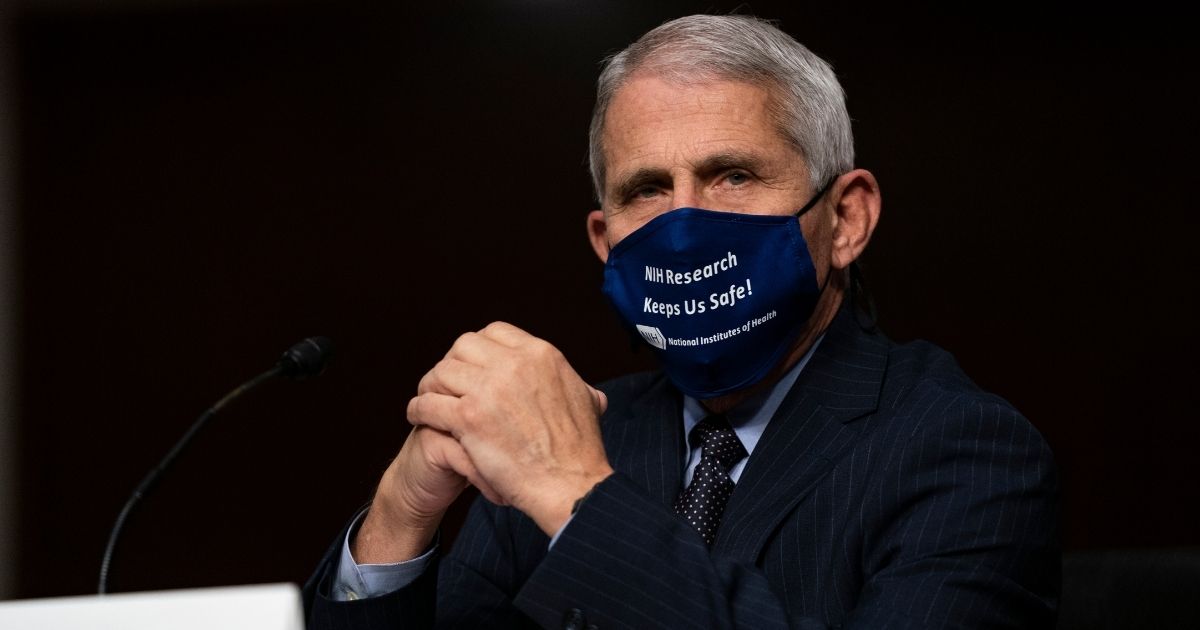 Now, mind you, Fauci is a hammer trying to hit the biggest nail since World War II. Of course he has some opinions on why you should listen to him and listen good. (Unless it’s that part about not buying masks at the beginning of the pandemic. That part you probably should have ignored.)

However, what Fauci says this “independent spirit” has led to is unnerving — namely, conspiracy theories in which the Americans think the coronavirus is, in fact, a hoax.

Fauci, the head of the National Institute of Allergy and Infectious Diseases and the de facto point man for the federal government on the epidemiological aspect of COVID-19, made the remarks in an interview with The Washington Post published Wednesday.

When “asked whether the different outcome [in terms of the differences in coronavirus measures between the U.S. and other countries] has more to do with American individualism or the executive branch’s stance on avoiding national mandates,” Fauci seemed to side with the former.

According to The Post, Fauci said the “independent spirit in the United States of people not wanting to comply with public health measures has certainly hurt us a bit.”

How it’s hurt us, however, was a little odd.

“There are people in various parts of the country who still believe that [COVID-19] is a hoax, that it’s fake — even when in their own state the hospitals have been overrun with patients in the hospital beds and in the intensive care unit,” Fauci said.

“That’s very unusual to see a situation like that but that is what is going on in this country.”

Do you plan to listen to Dr. Fauci?

I’m curious how one’s “independent spirit” leads one to believe that the disease “is a hoax, that it’s fake,” but there you go.

Fauci has made similar comments disparaging America’s “independent spirit” in the past.

In November, according to CNBC, he used a speech from the National Cathedral in Washington, D.C., to talk about problems with compliance he said were similar to those seen over in the United Kingdom.

“I was talking with my U.K. colleagues who are saying the U.K. is similar to where we are now, because each of our countries have that independent spirit,” Fauci said.

“I can understand that, but now is the time to do what you’re told.”

RELATED: These People Reportedly Died of Gunshot Wounds, But Look How Their Deaths Were Classified

Fauci, a man not always given to self-awareness, went on to say because of the steps being taken to fight COVID, scientists were sometimes seen as “authoritarian” and that science “has been lumped into politics” now.

“All of a sudden science gets caught in a lot of this divisiveness,” Fauci said.

Imagine how that might happen, particularly when those scientists are saying “now is the time to do what you’re told.”

So, what should we do now, particularly with Christmas coming up? “

“Stay at home as much as you can, keep your interactions to the extent possible to members of the same household,” Fauci told The Post.

“This cannot be business as usual this Christmas because we’re already in a very difficult situation, and we’re going to make it worse, if we don’t do something about it.”

He also had some tips if you needed to have “a tough conversation with a family member or friend,” The Post reported.

“Maybe this is a time to just say, ‘This is an unusual situation, it’s not going to last forever, it is highly likely that with vaccines being distributed, that we will be back to normal by next Christmas.’ So make the choice and keep yourself and your family healthy so that you’ll have many more Christmases ahead of you. That’s the way I would try to reason with them.”

As for those determined to see their family: “What some people do is they get a test right before they travel and if it’s negative, they try to protect it, quarantine themselves, travel to wherever they’re going and stay several days separated from the people they’ve come to visit and then get another test.”

When Anthony Fauci’s role in the COVID-19 crisis is re-examined in the years to come — as it no doubt will be — his inability to understand human motivation and how it responds to messaging will have to be addressed.

It’s not just lecturing us about our “independent spirit.” Last week, Fauci was asked about the reluctance of the black community to trust the government in medical matters, particularly given a history that includes the Tuskegee Experiment.

One of the reasons Fauci gave: “That vaccine was actually developed in my institute’s Vaccine Research Center by a team of scientists led by Dr. Barney Graham and his close colleague, Dr. Kizzmekia Corbett, or Kizzy Corbett.”

“Kizzy is an African-American scientist who is right at the forefront of the development of the vaccine,” he said.

Fauci, our nation’s top infectious disease expert, was asked a question about one of the great challenges of COVID-19 inoculation in the United States. It’s something his colleagues have no doubt discussed at length.

His answer: Don’t worry, one of our top scientists was African-American. This is a not-entirely-distant cousin of the, “I’m not racist, one of my best friends is black” argument.

At least it’s not as patently counterproductive as telling people that “now is the time to do what you’re told” — a certain way to get people to revolt against doing what they’re told.

Our “independent spirit” isn’t the problem — and if our national character was going to be an issue, what Fauci is admitting is the government couldn’t find a way to work with it.

Instead of providing reasonable guidelines for people to spend the holidays so as to mitigate the spread of COVID-19, Fauci gave us all advice on how to have a hard talk with our relatives about the dangers of COVID, as if we were talking to our kids about avoiding drugs.

Perhaps the Dr. Doom act worked at the beginning of the pandemic. It’s not doing the job now.