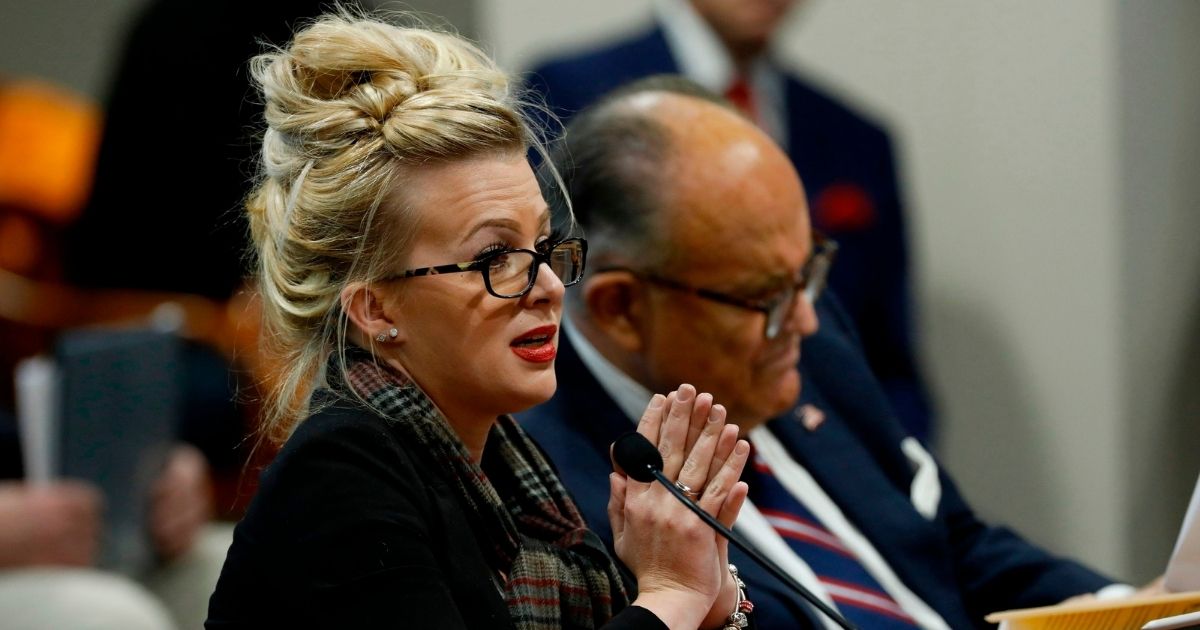 Attorneys for Dominion Voting Systems have sent a “cease and desist” letter to whistleblower Mellissa Carone, who earlier this month testified about Dominion’s voting machines in a hearing before Michigan legislators and was called the “star witness” in the case against Michigan’s conduct of the Wolverine State’s election.

In an affidavit, Carone said there was widespread fraud at the TCF Center in Detroit where election results were tallied and that she saw ballots counted multiple times. Carone is an information technology professional who was hired by Dominion as an independent contractor to provide support.

“You gained international infamy earlier this month as Rudy Giuliani’s so-called ‘star witness’ who could supposedly corroborate outlandish accusations that Dominion has somehow rigged or otherwise improperly influenced the outcome of the Nov. 2020 U.S. presidential election,” the company stated in a letter from attorneys Thomas Clare and Megan Meier, who are representing Dominion.

“Without a shred of corroborating evidence, you have claimed that you witnessed several different versions of voter fraud — ranging from one story involving a van, to other accusations that votes were counted multiple times,” the letter said.

“You published these statements even though you knew all along that your attacks on Dominion have no basis in reality,” the letter said.

Dominion mocked Carone’s claims that her work for Dominion gave her expertise to know how the company’s machines operated.

“We write to you now because you have positioned yourself as a prominent leader of the ongoing misinformation campaign by pretending to have some sort of ‘insider’s knowledge’ regarding Dominion’s business activities, when in reality you were hired through a staffing agency for one day to clean glass on machines and complete other menial tasks,” the letter said.

The letter demanded that Carone stop making what it called “defamatory claims against Dominion” and preserve all documents relating to any of her claims.

Do you think there was fraud in the election?

Carone has defended her testimony.

“I am a mother, I have two children, I have two degrees,” Carone said, according to The Washington Post.

“I don’t know any woman in the world that would write an affidavit under oath just to write it. You can go to prison for this.”

In an interview with The Epoch Times, Carone pushed back against comments from Dominion CEO John Poulos, who also appeared before Michigan legislators.

She disputed a comment from Poulos about whether the machines can connect to the Internet. Although Poulos said they could not, Carone said she disagreed.

“There were numerous inconsistencies with his story,” Carone said.

Dominion responded to her comments with a statement that said, “Dominion stands behind Mr. Poulos’s testimony under oath before the Michigan State Senate, and we welcome those who differ to take the same steps to ensure truth, trust, and accountability in their own public statements.”

Although Democratic nominee Joe Biden has secured sufficient Electoral College votes to win the presidency, the Trump campaign continues to contest the election, insisting that there has been voter fraud in states that include Arizona, Nevada, Georgia, Michigan and Wisconsin, as well as Pennsylvania.