Home Daily News Dog Found Abandoned in Crate in Road with Bag of Food Beside... 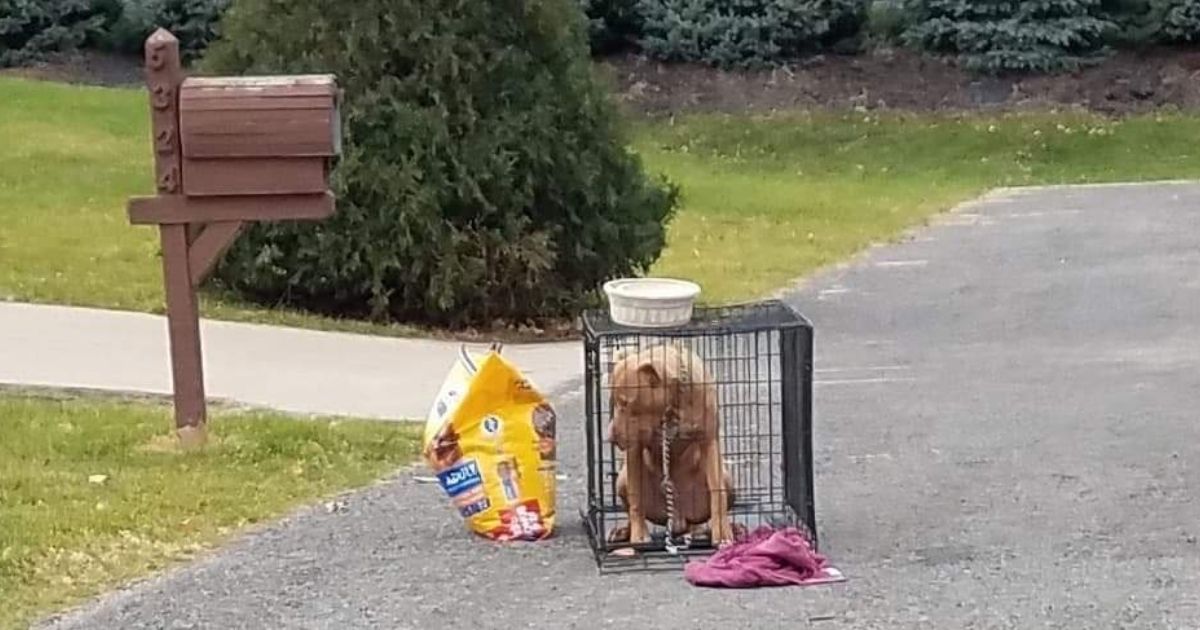 Few would disagree that lately, times have been hard. Families have been pushed to make decisions about work, school, life and even shopping that didn’t have to be made before.

People have been laid off, have had to start working from school and having their kids learn from home. Some have had it harder than others and have been forced to make difficult decisions — especially regarding family pets.

A woman from Michigan recently posted some heartbreaking photos of a dog who had been abandoned in a cage.

“This dog was left on a dead end road in Kalamazoo today like this,” Lindsey Keller posted on Nov. 10. “If you know anyone that can help, he is currently with a friend. He is unaltered and young (1-2). He met her dogs through the cage and was fine, but that is all I know. I told her I would reach out. She can only keep him through the night.”

Keller was careful to request that people not post hateful comments about the former owners.

“Please no bashing,” she wrote. “His family apparently thought that this was better then the pound and we do not know their circumstances. We are just looking to find placement for the poor dog with someone who can help get him neutered and keep him safe.”

Many still chimed in to voice their anger over the scenario, but it’s true that with COVID precautions, rehoming an animal has become even more difficult than it already was. If an owner finds themselves in a situation where they can no longer keep a pet, they face — at the very least — judgment from people who don’t know their situation or their reasoning.

If they’re in dire financial straits, they often can’t afford the surrender fee that many rescues and shelters require. If they’re needing to move quickly because of a family emergency, they don’t have time to wait to make an appointment with a shelter or rescue.

Sure, there are plenty of people who should never own animals in the first place and make hasty, lazy decisions that look quite similar on the outside. But there are good people in bad situations just trying to do their human best — the dog was left in a crate, yes, but that meant he wouldn’t get hit by a car, and he was left on a road that wouldn’t get much traffic.

He appeared healthy and well-fed. He had a long chain around his neck, but he also had a blanket and a bag of dog food. It’s never acceptable to abandon an animal — but in a way, his story has helped him become visible to more prospective adopters. We may never know what his backstory is, but the fact remained that regardless of what his previous owners intended, he still needed help.

And he got it.

“He is safe and in foster with Kalamazoo Animal Rescue,” Caroline Mallie-Campbell posted on Nov. 12. “He has to complete a 7 day stay hold before being adopted. From dumped on the side of road to my house. Last pic is at his new foster home.”

RELATED: Wilbur, a French Bulldog, Has Been Elected Mayor of Rabbit Hash, Kentucky

The photos shared by Mallie-Campbell show a much happier pup who is clearly feeling better about life. He seems to get along swimmingly with other dogs, and should be able to find a forever family in no time.

“Check it out this video and smile!” Keller wrote in an update. “Our mystery dog who was left by his family earlier this week is thriving in a foster home. He is currently waiting out his stray hold and then will be avaliable for adoption. Thanks to a small army of volunteers and Kalamazoo Animal Rescue.”

Volunteers make the dog rescue and adoption world go around, and thanks to their valiant efforts, this dog now has a great shot at living his best life.