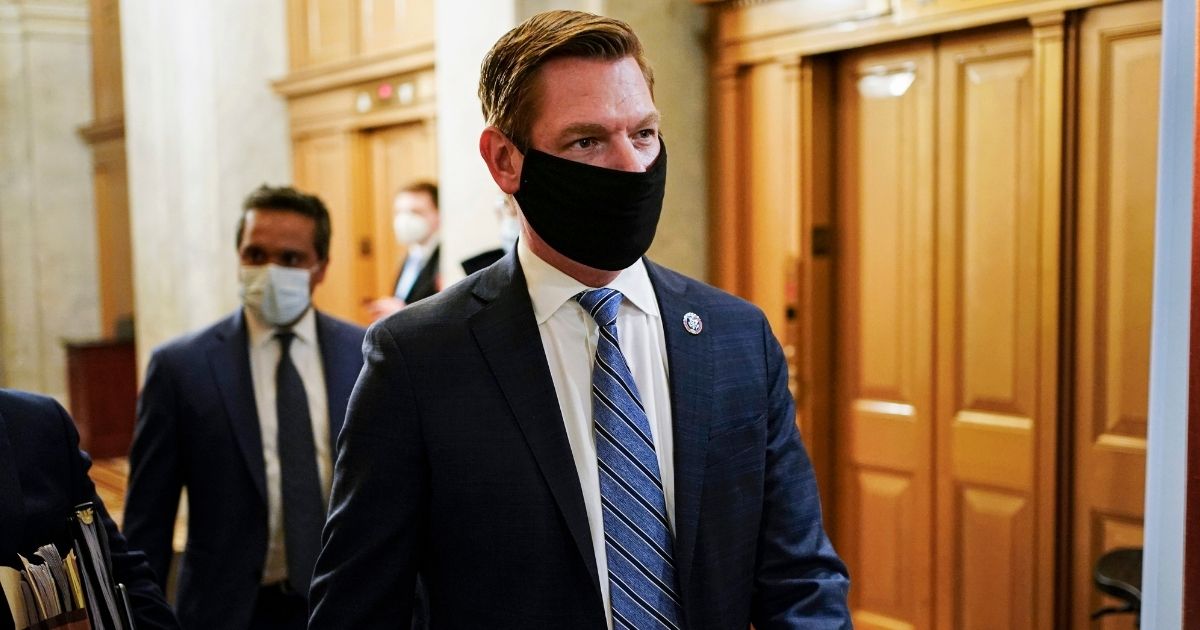 Democrats have utilized double standards for years now, but the latest one thrown out at the impeachment trial of former President Donald Trump may be the most blatant.

According to Breitbart, Democrats focused on Trump’s “fight like hell” comment on Wednesday, the second day of the former president’s second impeachment trial.

“He told them to fight like hell and they brought us hell on that day,” Democratic Rep. Jamie Raskin of Maryland said.

There’s one glaring issue that Raskin seems to have forgotten, however — he has used the phrase “fight like hell” multiple times in his own political career.

In 2017, Raskin promised to “fight like hell” against Trump’s budget plan, claiming that it was “a sweeping attack on active & retired civil servants.”

8/ #TrumpBudget is a sweeping attack on active & retired civil servants. I will fight like hell for the 88k+ fed workers in my district. pic.twitter.com/6f0tvwr2Mv

In that case, Raskin said he would fight like hell but did not necessarily call on anyone else to do so. He could use that excuse to claim he was not “inciting” violence.

Unfortunately, Raskin also decided to use the phrase on another occasion less than a year ago.

The GOP rush to replace Justice Ginsburg is all about destroying the Affordable Care Act, women’s health care and reproductive freedom, and the voting rights and civil rights of the people. We must fight like hell to stop this assault on health care and the Constitution. https://t.co/WBSRAG40wz

“We must fight like hell to stop this assault on health care and the Constitution,” he said in September, regarding Trump’s appointment of Justice Amy Coney Barrett to the Supreme Court.

With this comment, he crossed over into the territory of “incitement” by the Democrats’ own standard. He was no longer just promising that he would “fight like hell” — Raskin was calling for others to join him.

Even without the direct call to fight, Raskin’s lie, in and of itself, is inflammatory. Of course, it is not true that a president appointing a Supreme Court justice is destructive to voting rights, because presidents have been given such powers by the Constitution itself.

Yet if people believed Trump was destroying voters’ rights by the appointment, it would give them a legitimate reason to want to fight.

That lie — along with the call to “fight like hell” — could have been considered incitement just as easily as Trump’s speech on Jan. 6.

Raskin is not the only Democrat to utter the phrase “fight like hell” in the not-so-distant past. Rep. Eric Swalwell of California also used the phrase in 2019, regarding the Mueller report.

What will we do to ensure that you see this report? We’ll fight like hell, that’s what we’ll do. pic.twitter.com/RJ4HjZ5qwB

Considering that the report ended without finding any real impeachable evidence against Trump, it seems like a strange hill for Swalwell to die on.

Rep. Ted Lieu, also of California, has used the phrase multiple times in regard to “racist,” “sexist” and “anti-immigration” policies over the past five years.

Yes. I will fight like hell to oppose any anti-immigration policies.

We will file lawsuits, pass legislation in the House & fight like hell. But the reality is #votersupression will continue to occur because of GOP control.

So I’m asking the people to be ready for long lines in Nov. Bring a meal, a book, a chair, whatever will help you vote. https://t.co/18FJRe1d3K

Finally, President Joe Biden’s Twitter team seemed to have no issue with the phrase being utilized during Biden’s campaign in May of 2019.

In a Twitter thread, the account wrote, “[T]he longest walk a parent can make is up a short flight of stairs to their child’s bedroom to say, honey, I’m sorry. We have to move. You can’t go back to your school. You won’t see your friends because Daddy or Mommy lost their job.”

And he doesn’t understand that the longest walk a parent can make is up a short flight of stairs to their child’s bedroom to say, honey, I’m sorry. We have to move. You can’t go back to your school. You won’t see your friends because Daddy or Mommy lost their job.

In order to help eliminate such a situation, the Biden administration promised to — you guessed it — “fight like hell.”

That’s why I’ve spent my whole career fighting — and I will continue to fight — like hell so that no one ever has to make that walk again.

If you’re with me, I hope you’ll join my campaign and chip in what you can: https://t.co/JUJoxV4KiD

Now, I want to be perfectly clear here. I have no issue with the phrase “fight like hell” being used by any politician — because I don’t believe the phrase incites violence.

Do Democrats hold a double standard when it comes to ‘inciting violence’?

The problem lies in the double standard that Democrats are applying. If Trump should be impeached for using the phrase, why shouldn’t every Democrat who said the same words face the same condemnation?

The logical answer is that none of these people should face impeachment, including Trump. Yet for the Democrats, to admit that truth would be to admit the error of their ways — which they have no interest in doing.