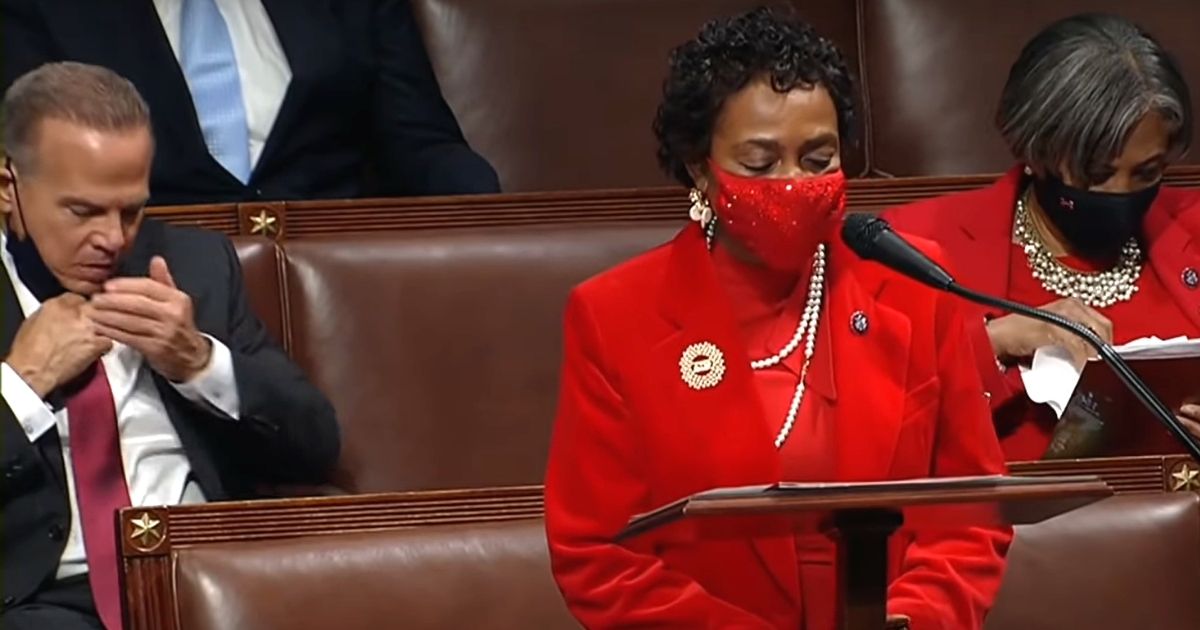 After House Democrats demanded a rule change meant to punish Republicans who refused to wear masks, one of their own became the poster child for coronavirus misconduct.

As Democratic Rep. Yvette Clark of New York was voicing her support for impeaching President Donald Trump on Wednesday at the Capitol, fellow Democratic Rep. David Cicilline of Rhode Island could not contain a sneeze any longer as he sat, masked, behind Clark.

Video of the moment shows Cicilline removing his mask to sneeze into his hand.

The sponsor of Trump’s impeachment put his mask back on his face after drawing a glance from a lawmaker identified as Democratic Rep. Brenda Lawrence of Michigan.

Twitter pounced on Cicilline, who did not appear to use any hand sanitizer after sneezing into his hand or using it to readjust his mask.

Why remove your mask to sneeze? Come on… pic.twitter.com/Cooy7wJamr

Gross. Sneeze into your mask, the crook of your arm, a tissue. Definitely not your hand.https://t.co/Vb0Fk5LgpK

Super Spreader Rep. David Cicilline (D-RI) pulled his mask
down while on the House floor on Wednesday to sneeze
into his hand. pic.twitter.com/kHeVEIYFHE

Saw a video of cicilline take off his mask, sneeze into his bare hand and put the mask back on. And we wonder why covid isn’t rampant in Congress.

“Remember first grade, when a teacher probably told you to make like a vampire whenever you sneezed or coughed? (For kids born after the year 2010, the point of reference is probably to do the ‘dab’ when you sneeze or cough.) Evidently, one Rhode Island Congressman never got the memo,” Bote wrote.

“[W]ith millions of people watching at home, demonstrating basic COVID-19 etiquette — even when you think no one is focused on you — is good practice. That goes double if you’re a Congressman whose peers have tested positive for the virus,” he wrote.

Cicilline’s behavior comes after the House was urged by Speaker Nancy Pelosi to adopt a rule to fine any member of Congress who does not wear a mask. The first offense will cost a member $500. The second will carry a $2,500 fine. Fines cannot be paid from campaign funds or expense accounts.

Forced mask-wearing became a Democratic demand after the Capitol incursion Jan. 6, according to USA Today.

In an Op-Ed in The Washington Post, Democratic Rep. Bonnie Watson Coleman said her recent positive coronavirus test was caused by Republicans not following the rules.

“When I say that many Republicans are responsible for what happened to me, to others and to the country last week, I mean their essential failure to accept facts led us here. Much like they should be able to accept the results of an election, elected leaders should be able to accept facts like the efficacy of masks. It’s clearly time for a congressional campuswide mask requirement, enforced by the House and Senate sergeants at arms,” she wrote.

Democratic Rep. Anthony Brown of Maryland, in supporting his proposal to fine mask scofflaws $1,000 per day, said in a statement that Congress sets an example for others.

“No Member of Congress should be able to ignore the rules or put others at risk without penalty,” Brown said. “As the people’s representatives, it is critical that we set an example for the rest of the country. If members jeopardize the safety of others, they should face fines.”