Home Daily News Dem Senator Reintroduces Domestic Terror Bill That Singles Out Those on the... 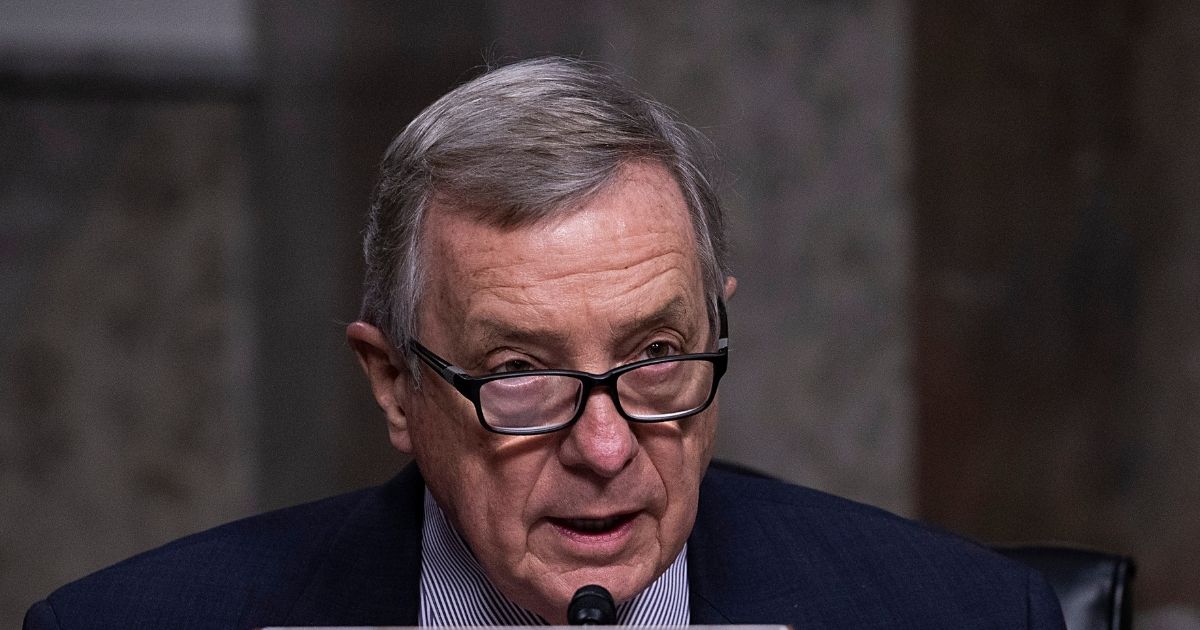 Democratic Sen. Dick Durbin of Illinois said Friday that spurred by the incursion at the U.S. Capitol on Wednesday, he will reintroduce his Domestic Terrorism Prevention Act to clamp down on right-wing groups.

The bill passed the House but not the Senate its first time around. Durbin is hoping for greater support in light of the incursion, according to WLS-TV.

“After the attack on the Capitol, I hope that Congress can finally come together and do something to address this threat,” Durbin said, WFLD-TV reported.

Efforts to focus on right-wing groups are being cheered on by the Anti-Defamation League.

“[R]ight-wing extremism is a global terror threat, one that directly endangers our nation and jeopardizes our democracy. This is not an exaggeration. It is the embodiment of a clear and present danger,” ADL CEO Jonathan Greenblatt wrote in an Op-Ed for Newsweek.

“Trump’s presidency will end, but extremist groups and the broader movement they occupy will not just disappear. That is why it is absolutely crucial for the incoming Congress and Biden-Harris Administration to work together proactively, deliberately and swiftly to dismantle this domestic terror threat,” he wrote.

The original bill, introduced in March 2019, said that “White supremacists and other far-right-wing extremists are the most significant domestic terrorism threat facing the United States .”

The bill went on to list a number of terrorist attacks, including those in New Zealand and Canada, that have been laid at the door of far-right extremists.

The bill then called for the creation of a “Domestic Terrorism Section within the Counterterrorism Division of the Federal Bureau of Investigation,” which would provide reports on the extent of domestic right-wing terrorism.

Are we seeing the start of an ideological witch hunt?

Durbin also wants similar offices within the Departments of Justice and Homeland Security.

After Durbin’s bill passed the House in September, its House sponsor, Democratic Rep. Brad Schneider of Illinois, said the legislation was the solution to a growing crisis, according to a news release on his website.

“Racially/ethnically motivated violent extremists were the primary source of ideologically motivated lethal incidents and violence in 2018 and 2019. From the Tree of Life synagogue to a Walmart in El Paso, Texas, we have all tragically seen the deadly effect,” he said.

“According to the Southern Poverty Law Center, the number of white nationalist groups rose by 55% since 2017. And last November, the FBI reported violent hate crimes reached a 16 year high in 2018. That number went up in 2019.

“Groups like the Boogaloos, Rise Above Movement and White Nationalist militias across the country are organizing. And so must we. We therefore need to equip our law enforcement officials, the FBI and Departments of Justice and Homeland Security, with the tools necessary to identify, monitor and prevent violent acts of domestic terrorism,” he said then.

“Violent white supremacists continue to pose the most significant domestic terrorism threat in our nation. For too long, we’ve turned a blind eye and haven’t seriously addressed this evil in our own backyard,” Durbin said in the release.

“The federal government must tackle this threat head on and ensure more Americans are not subjected to violence simply because of who they are or what they believe.”

Democratic Rep. Bennie Thompson of Mississippi, who chairs the House Committee on Homeland Security, wants the punishments to begin now, according to a news release.

“Given the heinous domestic terrorist attack on the U.S. Capitol yesterday, I am urging the Transportation Security Administration and the Federal Bureau of Investigation to use their authorities to add the names of all identified individuals involved in the attack to the federal No-Fly List and keep them off planes. This should include all individuals identified as having entered the Capitol building — an intrusion which threatened the safety of Members of Congress and staff and served as an attack on our Nation,” he said Thursday.

“We already saw reports of ‘unruly mobs’ in air on the way to Washington, D.C.” Thompson added.

“It does not take much imagination to envision how they might act out on their way out of D.C. if allowed to fly unfettered. This is an action that TSA and the FBI, by law, are able to take but, to my knowledge, have not yet taken. Alleged perpetrators of a domestic terrorist attack who have been identified by the FBI should be held accountable,” he said.