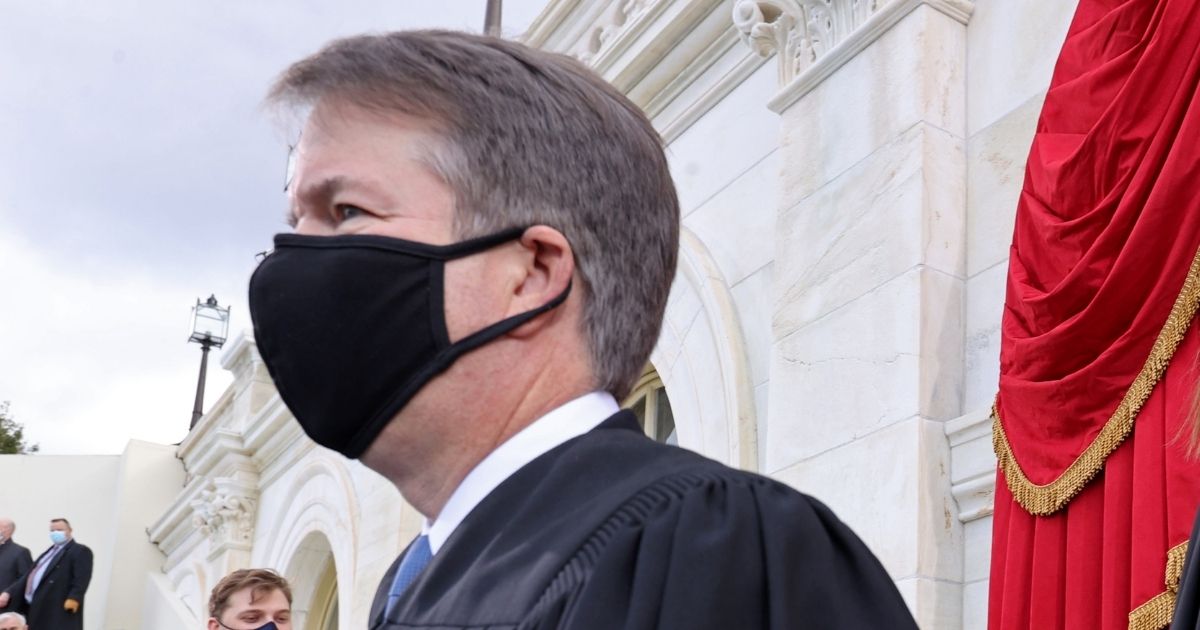 Rhode Island Sen. Sheldon Whitehouse, a Democrat, is doing his part to erase the legacy of former President Donald Trump.

Whitehouse, a senior member of the Senate Judiciary Committee, sent a letter to Attorney General Merrick Garland on Monday seeking the DOJ’s “cooperation in four important Judiciary Committee oversight matters,” according to a statement on his Senate website.

Whitehouse recalled that in confirmation and oversight hearings, he asked the DOJ “to clean up the ‘unfinished business’ of stonewalled Judiciary Committee oversight during and even before the Trump administration.”

This includes a “review of civil litigation, based on tobacco industry precedent, concerning climate change denial and obstruction by the fossil fuel industry; the cursory and politically constrained FBI investigation of allegations of sexual assault regarding Brett Kavanaugh; the Antitrust Division’s interaction with automakers regarding their California fuel efficiency standards negotiation; and the Department’s failure to investigate apparently false statements made by politically active nonprofit groups to the Internal Revenue Service.”

Specifically, Whitehouse is asking the DOJ to re-evaluate the background investigation conducted by the FBI into current Supreme Court Associate Justice Brett Kavanaugh during his 2018 Senate confirmation process. Whitehouse alleged that the probe “appears to have been a politically-constrained and perhaps fake,” as opposed to what FBI Director Christopher Wray had promised, which was a “background investigation ‘consistent with [the FBI’s] long-standing policies, practices, and procedures.’”

“If standard procedures were violated, and the Bureau conducted a fake investigation rather than a sincere, thorough and professional one, that in my view merits congressional oversight to understand how, why, and at whose behest and with whose knowledge or connivance, this was done,” Whitehouse’s letter to Garland read.

“If … the ‘investigation’ was conducted with drawbridges up and a fake ‘tip line’ and that was somehow ‘by the book,’ as Director Wray claimed, that would raise serious questions about the ‘book’ itself.”

We all remember Dr. Christine Blasey Ford. In a last-ditch effort to derail Kavanaugh’s confirmation by the Senate, California Democratic Sen. Dianne Feinstein trotted Ford out, insisting it was imperative that the college professor testify before the Senate Judiciary Committee.

Do you think Sheldon Whitehouse is a conspiracy theorist?

(Ford was reported to have a fear of flying, and the California resident acknowledged that she initially hoped she could interview with the Senate Judiciary Committee without traveling to Washington, D.C. Yet she also admitted to flying regularly for work and vacations. Take from that what you will.)

Ford testified that she had been sexually assaulted by Kavanaugh at some point in the 1980s; she originally claimed the assault occurred in the mid-1080s, but later said it was the summer of 1982.

It turned out that none of the four witnesses she named as having been present at the party where she claimed the alleged attack occurred have any memory of it — including Ford’s childhood friend, Leyland Keyser.

Ford’s testimony, and a succession of other inconceivable allegations from other accusers, led the FBI to conduct a supplemental investigation into Kavanaugh, according to Fox News.

RELATED: Cuomo’s Words on Kavanaugh Accuser Come Back to Haunt Him After Latest Statement

The inconsistencies in Ford’s statements continued to grow, and ultimately, Kavanaugh was confirmed to the Supreme Court. But despite the fact that the entire affair was a low point in American political history, the Democrats refused to let it go.

Ford’s baseless accusations inflicted much damage, not only to Kavanaugh and his family, but also to America.

It’s not a surprise that Whitehouse, a prolific conspiracy theorist, would try to revive this fiction. During the Senate confirmation hearing for then-Supreme Court nominee Amy Coney Barrett last year, he spent his time talking about how dark money is stealing the Supreme Court.

When it was his turn to speak, Whitehouse discussed “what he called the connections between dark-money groups and legal advocates that have helped support the revolution in the federal judiciary under President Trump and Senate Majority Leader Mitch McConnell,” according to NPR.

Perhaps Whitehouse should be exercising caution at a time when New York Gov. Andrew Cuomo, a Democrat, is facing far more credible allegations of sexual misconduct.

Oh, and let’s not forget the allegations against our president — allegations that Whitehouse apparently has no interest in probing.

Yet Whitehouse wants to revisit the Kavanaugh investigation. It’s shameful, plain and simple.