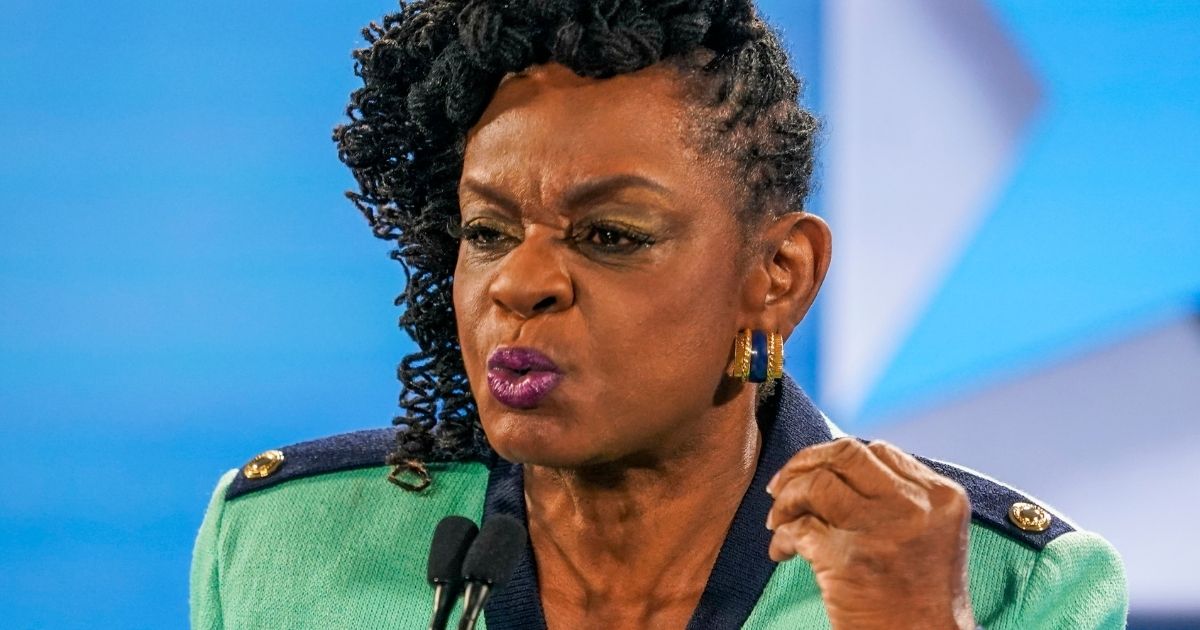 During a House Ways and Means Committee hearing Wednesday, Wisconsin Rep. Gwen Moore showed that Democrats are not interested in unity — or even decency.

Committee members were debating the proposed expansion of unemployment insurance benefits in President Joe Biden’s $1.9 trillion pandemic aid bill when Republican Rep. Kevin Hern shared that he had grown up in poverty.

The congressman from Oklahoma told his colleagues he was never sure “if the lights would still be on … or if there would be food on the table” when he returned from school each day.

“My childhood is marked by a dependence on government aid that incentivized my stepdad to stay home rather than work. I’ve seen what the welfare system does to families,” Hern said.

The point, he explained, was that he understood the issues the committee was dealing with on a personal level.

Moore immediately pounced on this notion.

“Listen, colleagues, the lazy stepfather welfare queen boogeyman troll must not be paraded out again to steer us from our imperative to intervene in this national crisis,” she said. “These families, these children, need our help right now.”

Nice way to reach across the aisle, congresswoman.

HuffPost reporter Arthur Delaney tweeted about the exchange between Hern and Moore.

“A Republican on the Ways and Means Committee opposes Democrats’ plan for expanded unemployment benefits in part because it reminds him of his loser stepdad who wouldn’t work. Intense,” he said.

A Republican on the Ways and Means Committee opposes Democrats’ plan for expanded unemployment benefits in part because it reminds him of his loser stepdad who wouldn’t work. Intense.

In two subsequent tweets, Delaney wrote: “He said his childhood was ‘marred’ by his stepdad’s dependence on government. ‘At a young age I decided the example set by my stepdad was not the life I wanted and I put myself to work. I worked harder and longer than anyone.’”

RELATED: If Pelosi and Biden Get Their $15 Minimum Wage, US Would Have Highest Minimum Wage in the World

J.P. Freire, the Republican spokesman for the committee, responded to Delaney’s thread in the tweet below.

Folks replying to this thread: Any familiarity with crushing poverty and its terrible correlation with abuse/neglect might not want to dunk on someone sharing how their experience motivated them to escape it.

Disagree with his policy point, sure, but maybe don’t mock hardship.

To his credit, Delaney replied: “reasonable point from @WaysandMeansGOP spox.”

Hern and his fellow Republicans are entirely correct that the generous unemployment benefits offered during the pandemic disincentivized many Americans from looking for work. Many people were receiving more income from government aid than they had earned while working.

According to The Wall Street Journal, “Roughly half of all U.S. workers stand to earn more in unemployment benefits than they did at their jobs before the coronavirus pandemic shut down swaths of the U.S. economy, a result of government relief that employers say is complicating plans to reopen businesses.”

Do you believe Democrats are truly interested in unity?

The report said, “The package of coronavirus stimulus laws Congress passed and President Trump signed in March included a $600 boost to weekly unemployment benefits through July 31. As that support is added to state benefits over the coming weeks, the average weekly payment to a laid-off worker should rise to about $978 from the nearly $378 the Labor Department said was paid on average late last year.”

The increase in benefits has hurt small businesses. Last April, The Washington Free Beacon interviewed Daniel Johnson, the owner of a New Orleans-based construction company, who said the passage of the Cares Act in March “led to a mass exodus of employees.”

“The majority of my team’s last day was 3/13,” Johnson said. “Most focused on fear of bringing the virus home to weak family members young and old. I get it, but our work allows them to have substantial space between each other. Most are desperately waiting for unemployment benefits and are not interested in returning to work anytime soon. Very frustrating as an employer.”

Regardless of where a lawmaker stands on any given issue, Moore’s mockery of her colleague serves only to deepen the already yawning political divide in this country.

But she doesn’t care. She knows that ridicule is an effective political tool.

A glance at Saul Alinsky’s list of 13 “Rules for Radicals” tells us that “ridicule is man’s most potent weapon. … There is no defense. It’s irrational. It’s infuriating. It also works as a key pressure point to force the enemy into concessions.”

Democrats don’t want unity with Republicans. They want power over us — as much as possible for as long as possible.