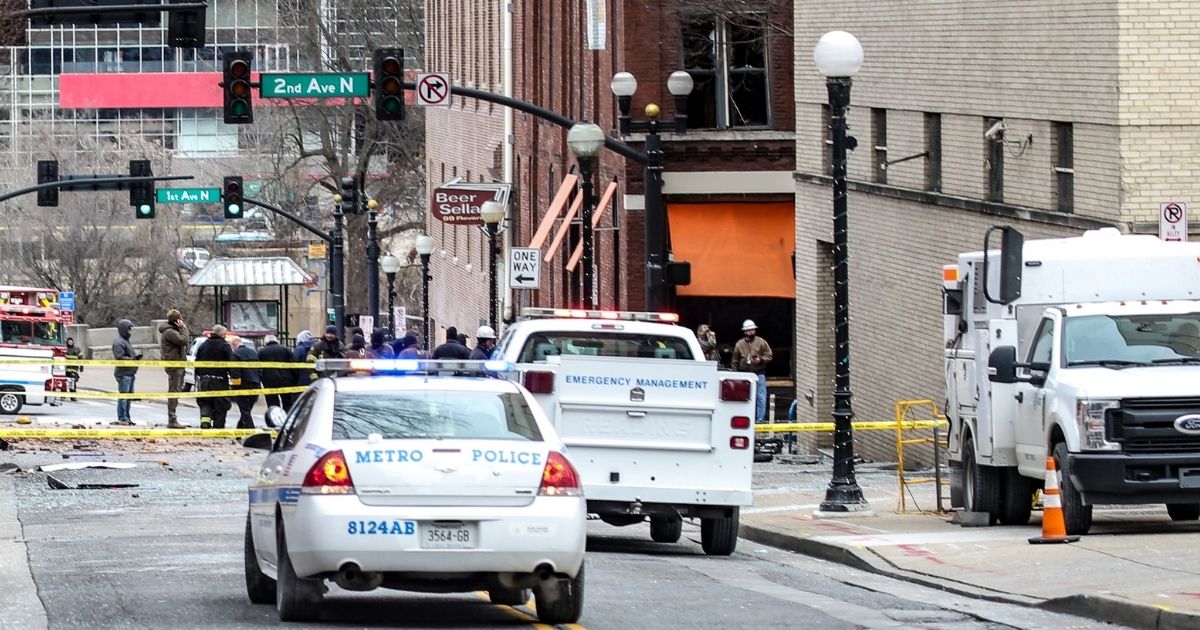 Is this what you want to defund, liberals?

On Christmas Day, an explosion in downtown Nashville, Tennessee, injured three and knocked out regional internet and cellular coverage at communications giant AT&T.

Human remains were found near the RV that contained the explosive device. According to the BBC, the explosion is being investigated as a suicide bombing.

Yes, the RV played a message warning there was a bomb on board. However, what really saved lives were the first responders who risked life and limb to evacuate residents.

WARNING: The following video contains graphic footage that some viewers will find offensive.

Nashville Mayor John Cooper praised the police officers who ran toward the explosion as “incredible heroes.”

According to the New York Post, six local policemen took “swift action” when the RV began broadcasting a warning that there would be an explosion in 15 minutes.

Are these police officers heroes?

“These incredible heroes who ran to danger with uncertain outcomes ahead of them were responsible for so many injuries being saved,” Cooper said during a Friday news conference.

The officers “took swift action and directed people away to save lives — even at the time when their own lives would have been in peril.”

Even though the explosion happened so early — when neighborhood residents were either sleeping or preparing for Christmas morning — the six officers worked to make sure the area was evacuated before the camper exploded.

“Officers immediately began knocking on doors and evacuating residents here, not knowing if the bomb was going to detonate immediately or if it was going to go off in the time that it was stated,” said Metro Nashville Police Chief John Drake, according to CNN.

While a police spokesman said the force of the explosion knocked one officer down and caused hearing loss in another, none of the injuries was serious.

Cooper said authorities were “not going to rest until those responsible for this outrageous and cowardly attack are brought to justice.”

Who’s going to be looking into it? The same people activists wanted defunded over the summer.

In June, Nashville Public Radio attended a council meeting where activists said money needed to be shifted away from Nashville police.

“I’m asking you to defund the police, divest from incarceration,” one activist told the council.

“I think that there are so many other things that we can be investing our money in,” another said.

And here was a public school teacher: “If we prioritize policing over education, we are saying that it’s more important to punish than it is to build up.”

But “punishing” is not what police do — to the extent they “punish” people, the intent is to punish them to keep others safe.

In this case, however, there wasn’t anyone to punish. There were only people to save — and the officers saved them, all with no regard to their own lives or safety. You’re not paying for punishment. You’re paying for public safety.

That’s what activists in Nashville — and around the country — don’t understand. The idea is that if you take money away from police, what happens is the Derek Chauvins and the Stacey Koons of the world get plucked out of the force. All of those military troop carriers they’re buying get sold. Nothing else will change.

That’s magical thinking, though. The reality of it is this: You’ll have fewer Brenna Hoseys and James Luellens, men and women willing to run toward a van about to explode and not away from it.

For the record, Nashville police weren’t defunded. According to WTVF-TV, the June vote included extra money for hiring new officers. Community activists, who wanted money shifted to other priorities like violence mediation and community outreach.

“Let’s invest in our people. Let’s invest in our communities. Let’s not keep investing in throwing them away,” Joseph Campbell-Gooch, an organizer with the Nashville People’s Budget Coalition, one of the groups behind the defunding effort, said, according the station.

Nashville did invest, though. The city invested in the kind of men and women who would save lives the way that these six officers did. Notice how silent the “defund the police” crowd is now.