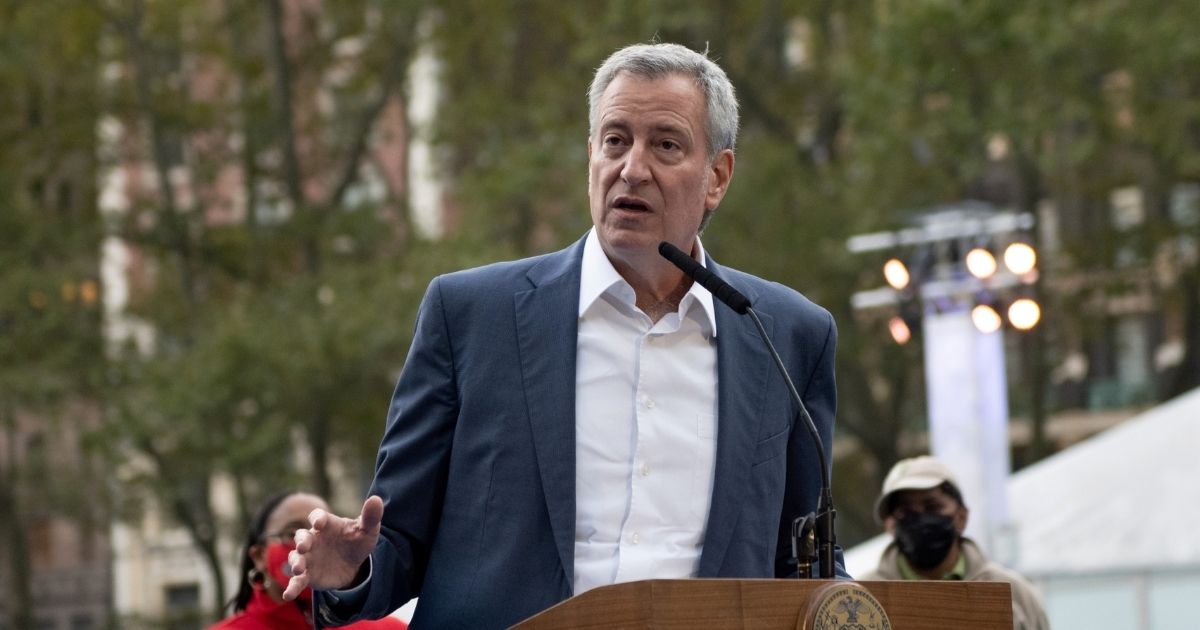 Crime is up dramatically in New York City. The New York Police Department is spread thin because of retirements, leaving the officer’s union to say that the anti-cop sentiment among officials in city hall had left the “NPYD broken, almost beyond repair.”

So naturally, what Mayor Bill de Blasio thinks the NYPD should be doing is knocking on people’s doors if they’re suspected of saying something hateful.

According to Fox News, de Blasio made the comments Thursday, one day after a gunman killed eight individuals in a series of killings at Atlanta-area massage spas. Six of the eight victims were Asian-American, leading to claims the shootings were part of a wider narrative of increasing violence toward Asian-Americans.

Mind you, the gunman himself told police he’d chosen the spas because of his “sexual addiction” and use of spas to obtain sexual services; no one had been able to find any evidence he had an animus toward the Asian community and there is ample evidence of serious sexual issues in the man’s background. However, when it comes to the left, feelings don’t care about your facts.

Anyhow, I digress. At his Thursday media briefing, de Blasio urged anyone, particularly Asian-Americans, to call city authorities if they experience what they feel is discrimination.

And then came the money quote.

“I also think even if something is not a criminal case, a perpetrator being confronted by the city, whether it’s NYPD or another agency, and being told that what they’ve done was very hurtful to another person and could [if ever] repeated lead to criminal charges, that’s another important piece of the puzzle,” de Blasio said.

How was that supposed to work, a reporter wondered, when these were non-criminal cases?

Do you think this idea violates the First Amendment?

“It’s NYPD or could be other agencies as well. But NYPD is a great example. One of the things officers are trained to do is to give warnings,” de Blasio said.

“If someone has done something wrong, but not rising to a criminal level, it’s perfectly appropriate for an NYPD officer to talk to them, to say, ‘that was not appropriate,’” he added.

“‘And if you did that on a higher level, that would be a crime.’”

Using the NYPD beyond criminal matters, he said, could manage problematic speech toward minorities.

“And I think that has an educating impact on people. I think it has a sobering impact that we need,” he said.

“By the way, if something might be a crime, if it’s not 100 percent clear, the NYPD is going to investigate, I assure you, if an NYPD officer who calls you or shows up at your door to ask about something you did, that makes people think twice,” he added.

Firstly, what de Blasio described in the beginning of this bit is 100 percent not a crime, and that’s clearly what he was being asked about — the part where he proposed that “even if something is not a criminal case, a perpetrator being confronted by the city, whether it’s NYPD or another agency” could have a positive effect.

He made it clear the NYPD was a definite possibility for carrying this out: “One of the things officers are trained to do is to give warnings,” he said.

Yes, for criminal offenses or things that might rise to that level. But de Blasio is not insinuating any of this. He’s insinuating that hurtful speech falls under the purview of this proposed arrangement.

But they wouldn’t be arrested! The already-overstressed NYPD would just come and, you know, intimidate them a little, according to de Blasio — except don’t call it “intimidating.”

Instead, “sobering impact” will do nicely.

And  police will have an “educating impact,” too! It’ll make you think twice. I mean, you may not have even said anything. You may not even be guilty of this not-crime. But don’t worry: The NYPD will be there to educate you that your free speech might not technilly end where someone else’s easily bruised feelings begin, but darned if you don’t need some sobering up.

I’d like to note this man once thought he should be your president. Thankfully, Democratic primary voters didn’t agree. As bad as you think President Joe Biden may be, he’s never floated the idea of the FBI visiting the homes of alleged hate-speech provocateurs to “educate” and “sober” them up. (Although don’t give him any ideas.)

Not only is this the use of state police power to intimidate individuals who haven’t committed any crime, it also makes the NYPD — at a time where it has limited resources and expanding problems — a kind of schoolyard monitor policing complaints of hurt feelings (a system that will never, ever be abused with spurious allegations, by the way).

Thankfully, the legal and optical speed-bumps to implementing this plan will likely kill it before it starts — like the preferences of Democratic voters killed de Blasio’s presidential ambitions before they ever got off the ground. It’s troubling enough, though, that de Blasio was considering it in the first place.